This photo has been released into the public domain because it contains materials that originally came from the U.S. National Oceanic and Atmospheric Administration. No endorsement by licensor implied.

Newtok is a Native Alaskan village that is being forced to relocate as its shorelines erode. The erosion rates have been exacerbated by thawing permafrost, declining sea ice protection, increased storm surge exposure, and warming temperatures. In 1994, Newtok was one of the first villages to consider relocating to a new, less vulnerable site. In 2003, Newtok negotiated a land exchange agreement with the U.S. Fish and Wildlife Service and is now in the process of moving forward with plans to relocate their entire population to a new site. Moving the entirety of Newtok to its new location is anticipated to cost an estimated $80–130 million. Relocation efforts have been delayed for a variety of reasons, including funding constraints.

Newtok, home to approximately 400 residents, is located on the Ninglick River in the Yukon-Kuskokwim Delta Region. It is north of Nelson Island and 94 miles northwest of Bethel. Indigenous populations have inhabited Newtok for at least 2,000 years; they are known as the Qaluyaarmiut people. The Qaluyaarmiut people are avid fishermen and live a traditional Yup’ik Eskimo subsistence lifestyle.

The village’s proximity to the shoreline is proving to be hazardous. Recent erosion rates in Newtok have averaged 90 feet per year and the community experienced major floods in September 2005 and February 2006. A shoreline erosion map based on historic shorelines in maps and aerial photos indicates that the Ninglick River has eroded from 36 to 83 feet per year upstream; the average rate of erosion occurring near Newtok from 1954 to 2003 was measured to be 68 feet per year. A 1983 study found that the main variables affecting erosion of the bank of the Ninglick River include a combination of temperature changes, wave action, and river currents. As a result, fall storms have caused waters to surge through the Ninglick River and inundate the town of Newtok. Also, the increased erosion rate altered the hydrology of the river from quick moving to more slough-like. Historically, Newtok discharged their untreated sewage into the Ninglick River but with the change in hydrology, the disposed waste had no place to go, causing a public health hazard.

Newtok is also being threatened by thawing permafrost and decreased sea ice that once protected the coastal village against wave erosion. As such, the Alaska Climate Change Sub-Cabinet Immediate Action Workgroup (IWA) focused part of its work on Newtok. In 2007, the IWA recommended that a suite of emergency response plans be developed to identify the most immediate and cost-effective ways to reduce the community’s vulnerability. These emergency response measures have been very important for Newtok as community members wait for the relocation process to finish. In 2010, Newtok completed evacuation, emergency operations, and continuity of operations plans to guide emergency response and recovery for the community. Newtok’s local hazard mitigation plan, which integrates climate change impacts and responses, was updated in 2015.

In 1994, the Newtok Traditional Council began to consider relocating the village due to ongoing erosion problems. The Council evaluated six potential sites and settled on a location at the north end of Nelson Island called Mertarvik, a site managed by the U.S. Fish and Wildlife Service as part of the Yukon Delta National Wildlife Refuge. In 1996, the Newtok Native Corporation authorized the negotiation of a land exchange within the Yukon Delta National Wildlife Refuge with the U.S. Fish and Wildlife Service. By 2003, after much lobbying and legal counsel, the Service agreed to exchange land with the Newtok Native Corporation. Three reports were prepared during the early planning efforts: Newtok Background for Relocation Report, Preliminary Geotechnical Overview, and the Newtok Transportation Plan.

In 2006, the Newtok Planning Group was formed and the Alaska Department of Commerce, Community, and Economic Development’s Division of Community Advocacy began to work with the Newtok Native Corporation to facilitate the relocation of Newtok to the Mertarvik site. First, they attained an $800,000 grant from the Economic Development Administration to build a multi-use marine support facility (e.g., barge ramp, dock and staging area). The Newtok Traditional Council was awarded a grant from the Denali Commission to develop a community, water, and sewage layout plan for the new village site. In sum, moving Newtok to its new location will cost an estimated $80­–130 million, about $2 million per household.

In June 2011, the Newtok Traditional Council approved the following guiding principles for the Mertarvik relocation:

In 2012, the Mertarvik Waterfront Development Study was completed, including engineering surveys and designs to support relocation planning and implementation. The Innovative Readiness Training Program (IRTP) has committed to the Newtok relocation efforts by providing labor and transportation capabilities. For example, the IRTP constructed an access road from the barge landing to the new village site in 2010, and in 2011, they started working on an evacuation shelter to protect the current village and community members from flooding. Construction of the evacuation shelter and relocation efforts were temporarily halted due to funding constraints as well as internal political disputes. Part of the funding issue, according to local experts, was that neither the state nor federal government acknowledge that climate change qualifies for disaster relief funds (i.e. Stafford Act). Funds have been gathered in a piecemeal fashion from sources such as the State of Alaska, Bureau of Indian Affairs, Denali Commission, and Housing and Urban Development, and are being used to build the Mertarvik Evacuation Center and build new housing units. A proposal to the Federal Emergency Management Agency (FEMA) to support relocation to the new site was rejected in 2017, but in 2018 FEMA partnered with the Alaska Division of Homeland Security and Emergency Management to buy seven homes, allowing approximately 50 residents to move. In summer 2019, the IRTP and Ukpeaġvik Iñupiat Corporation Construction completed construction on 13 new homes (designed by the Cold Climate Housing Research Center), portable alternative sanitation systems, water treatment and power plants, a landfill, and a water and sewer system for the Mertarvik Evacuation Center. In late 2019, approximately one-third of the residents moved to Mertarvik (~140 adults and children). For those who have stayed behind in Newtok, they must contend with a village that has limited infrastructure (e.g., no running water) due to disinvestment.

The U.S. Government Accountability Office has identified thirty-one coastal villages in Alaska that may need fast-paced relocations to escape erosion and melting permafrost. At least 12 Native Alaskan villages have elected to explore relocation as a viable alternative as their towns are swallowed by the sea. These sites include Newtok, Kivalina, Shishmaref, Shaktoolik, Allakaket, Golovin, Hughes, Huslia, Koyukuk, Nulato, Teller, and Unalakleet. In November 2019, Newtok ranked as the seventh most at-risk community in Alaska due to the combined threats of erosion, flooding, and melting permafrost.

The Newtok Planning Group was formed in May 2006 when representatives from state and federal agencies and non-governmental organizations began meeting to coordinate assistance to the villageof Newtokin its relocation to a new village site on NelsonIsland. The relocation site is called Mertarvik, which in Yup’ik means, “getting water from the spring.” 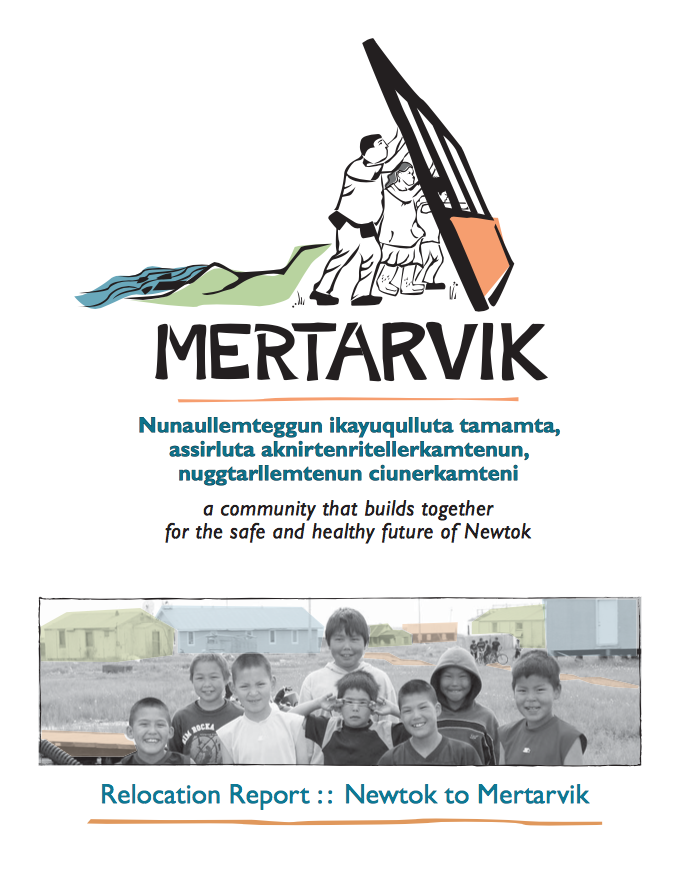