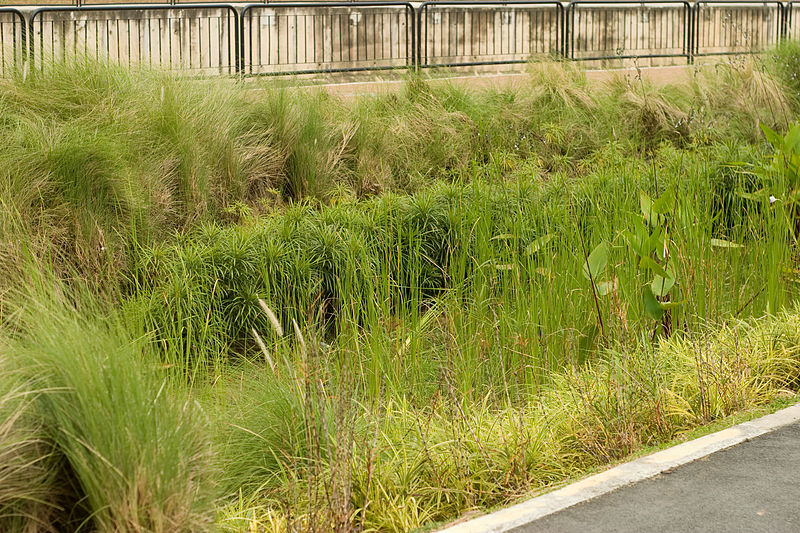 In the Great Lakes region, climate change is predicted to bring greater amounts of precipitation falling in shorter periods of time, resulting in increased flooding. For Detroit, flooding brings an extra problem – sewage overflows. This realization inspired the Sierra Club Great Lakes Program to get involved in the sewer overflow issue and begin exploring green infrastructure solutions. Green infrastructure creates rainwater filtration right at the surface, keeping rainwater from entering the combined sewer system and preventing additional sewage pollution in the Great Lakes. This case study is also part of a Climate Adaptation Toolkit, developed in partnership between EcoAdapt and Freshwater Future.

The Metro Detroit area of Michigan covers close to 4,000 square miles of land and is home to over 4.2 million people. The city itself is located on the Detroit River, a 32-mile long river connecting Lake St. Clair to Lake Erie. The Detroit Water and Sewerage Department (DWSD) is the third largest water and sewer utility in the U.S., and provides water service to 3 million people in 126 neighboring counties in Southeastern Michigan. DWSD’s Wastewater Treatment Plant is the largest single-site wastewater treatment facility in the U.S., and currently services the needs of 35% of the state’s population – including all of Detroit and 76 other surrounding communities. DWSD is a combined sewer system, which means that sewage and stormwater runoff run through a single pipe system, and anything more than an inch of rain in a short period of time can cause raw sewage to overflow into rivers and streams.

In the Great Lakes region, climate change is predicted to bring more intense storms including greater amounts of precipitation during shorter time periods. More intense rainfall in a shorter period of time is likely to result in more sewage overflow events, adding more sewage pollution to the Great Lakes. In response, the Sierra Club Great Lakes Program began investigating solutions that would address the sewage pollution problem and help prepare communities for climate change. Early on, the Sierra Club realized that getting DWSD to invest in state-of-the-art technology to improve their wastewater treatment plant would solve many of the issues, but it would likely raise the costs of water and sewage for residents. Many Detroit residents were hit hard by the declining economy, making this a less-than-ideal solution.

Instead, the Sierra Club decided to focus on green infrastructure solutions that create rainwater filtration at the surface rather than in the sewer systems. This approach is often cheaper than traditional infrastructure options, help beautify the community, and provide opportunities for community engagement and empowerment. Green infrastructure includes everything from rain barrels and cisterns to rain gardens and constructed wetlands to landscaping with native vegetation and using permeable pavers. Rain barrels and cisterns collect rainwater from downspouts on homes or businesses, keeping it out of the sewers and providing water that can be used to water gardens or lawns, wash cars, and other such uses. Rain gardens, native vegetation landscaping, constructed wetlands, and permeable pavers allow rainwater to filter through the soil rather than flooding parking lots and roads and carrying polluted runoff into the sewer system.

To raise awareness and spur implementation of green infrastructure the Sierra Club has been focused on education and outreach throughout Detroit, talking to residents and community groups about the benefits and cost-effectiveness of green infrastructure. In partnership with Freshwater Future, they held a mini-conference to educate community groups about climate change adaptation strategies and green infrastructure. One group, the West Grant Boulevard Collaborative, received a grant from Freshwater Future to create rain gardens at a branch of the Detroit Public Library. They designed the rain garden around a low area in order to collect rainwater and allow it to slowly percolate into the soils, and they planted hardy native vegetation that can tolerate variations in wet and dry conditions, stabilize soils, and absorb and filter polluted rainwater. In Fall 2011, the Sierra Club installed a rain garden in another Detroit neighborhood, which received a very positive response from the neighbors. As a result, they have expanded their efforts and have planted 5 more rain gardens on the block with 2 additional gardens on the way. Funding from the Erb Family Foundation and Freshwater Future has been used to purchase plants and provide technical assistance on how, where, and what to plant in the rain gardens.

In Summer 2011, the Sierra Club started offering rain garden tours in different Detroit communities, which led to the creation of an 8-step rain garden guide that talks about climate change, increased precipitation, Detroit’s combined sewer system, and what residents can do about it. They partnered with a business, Backstreet Container, to acquire old pepper barrels that were distributed to residents for use as rain barrels, and partnered with a local bike store, Wheelhouse Detroit, to do two bike tours – called the Detroit Green Water Infrastructure Bike Tours – that sold out. Participants went on a 12-mile ride to learn about rainwater, Detroit’s combined sewer system, and to see some of the green infrastructure solutions that exist to help prevent flooding and sewage pollution. During one of the tours it was raining, giving the participants a chance to see the green infrastructure in action.

In addition to their education and outreach efforts, the Sierra Club now co-chairs a Water Subcommittee for the Detroit City Council Green Task Force, initiated a home water audit program, and began collaborating with the Peoples Water Board Coalition. Through the Water Subcommittee effort, they have encouraged the city to develop a watershed plan and they have created the Detroit Water Agenda, which looks at best management practices for stormwater and how that relates to climate change. The group is now working to prioritize recommendations from the Water Agenda to begin implementation. Their home water audit program teaches people how to save water and money by using green infrastructure and encourages people to refrain from doing laundry and other water-intensive activities when it’s raining heavily. Sierra Club has also collected over 1000 signatures requesting that the DWSD create an incentive program for residents and businesses that do install green infrastructure. Finally, they are collaborating with the Peoples Water Board Coalition – a social justice group – to talk about concerns of aging infrastructure, climate change, keeping water affordable, and creating jobs.

This approach to education and engagement—not just bringing the issue down to the local level, but giving people both problems and solutions they can observe in their own neighborhoods—seems to be garnering a lot of support. Next steps for the Sierra Club include working with a local non-profit, Data Driven Detroit, to start mapping sewage outfalls on the Detroit and Rouge rivers to identify more strategic places to install green infrastructure. The Sierra Club is also exploring the potential for some type of backwards calculation that helps determine how many rain gardens or constructed wetlands would be needed to reduce the overall amount of sewage going into the rivers.

The Sierra Club is the nation’s oldest and largest environmental group.

The Great Lakes hold one fifth of the world's fresh surface water supply and currently provide drinking water to over 42 million people. Yet each day, our Lakes are damaged economically and ecologically by untreated sewage, industrial pollutants, habitat loss and invasive species. Climate change will only make these problems worse. Unless we invest in a solution today, the price we pay tomorrow will be much higher and future generations may never experience the Lakes as we know them.