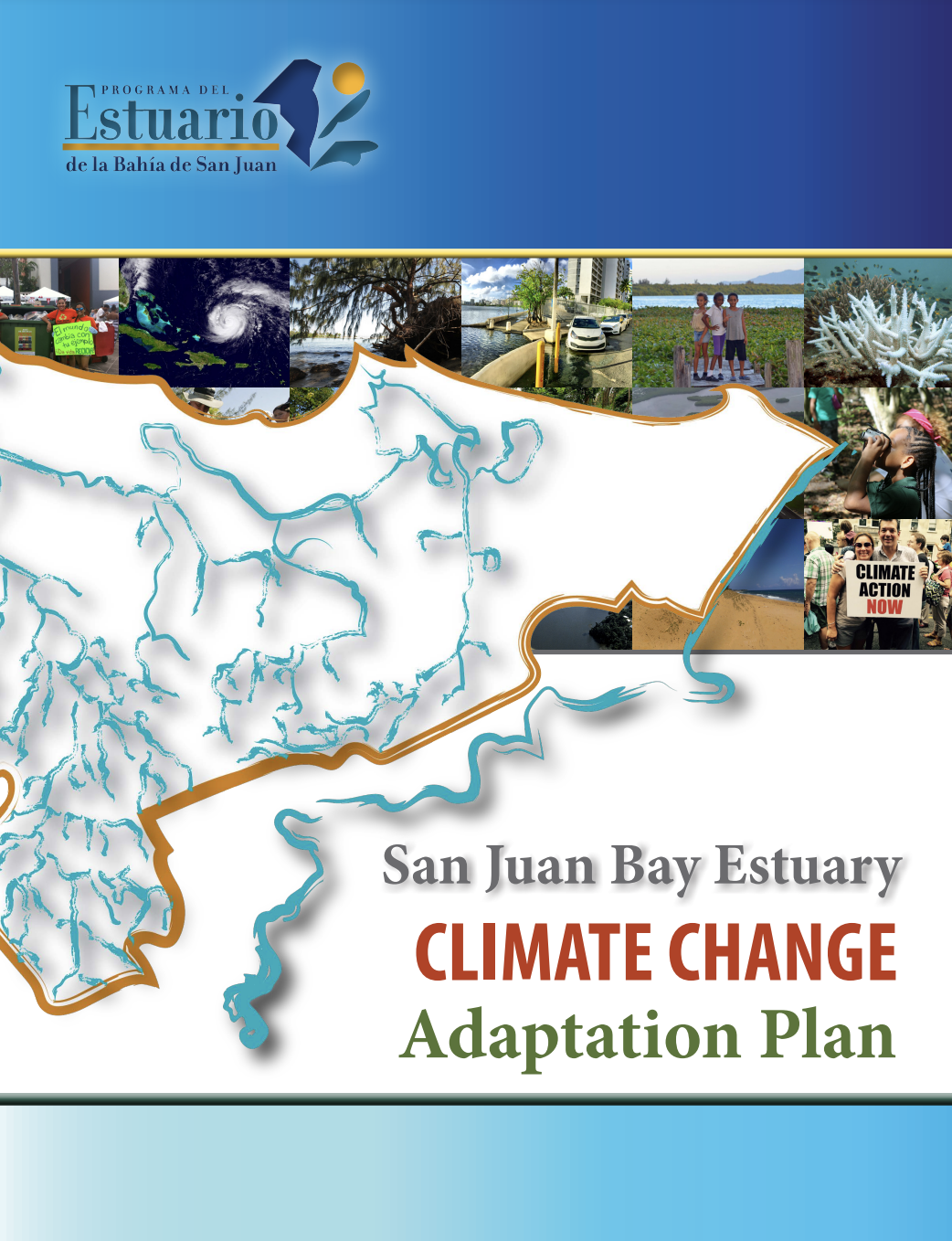 Extreme climatological events, coastal erosion, and acidification of the oceans are some of the impacts caused by climate change. Te San Juan Bay Estuary (hereafter the Estuary) is susceptible to these impacts, some of which are already causing evident changes in the Estuary's systems. Tese impacts compromise and may endanger the goals of the San Juan Bay Estuary Program (the SJBEP) to enhance, restore, and conserve the Estuary. Therefore, the SJBEP is developing a climate-change adaptation plan tailored to the particular challenges of the Estuary as a tropical system. The SJBEP has identified potential risks, analyzed the Estuary's vulnerability in the face of these risks, and developed a plan of action to deal with the effects of climate change.

This report summarizes the SJBEP’s efforts to develop a plan for adapting to the foreseen effects of climate change. In pursuit of this objective, the SJBEP has followed the steps set out in the workbook Being Prepared for Climate Change: A Workbook for Developing Risk-Based Adaptation Plans (hereafter, the Workbook), which is part of a pilot project designed by the Climate Ready Estuaries program (hereafter the CRE), under the U.S. Environmental Protection Agency’s National Estuaries Program (the NEP). Te Workbook is basically a tool intended precisely to help organizations such as the SJBEP identify climate change risks, carry out vulnerability studies, and develop a plan for adapting to the impacts caused by climate change.

The principal goal of the CRE program (www2.epa.gov/ cre) is to help organizations design effective plans for adapting to climate change impacts, especially impacts that make it difficult or impossible for the organizations to achieve their goals and objectives. In pursuit of this goal, the CRE provides coastal communities and NEP member programs with tools for assessing their areas’ vulnerability to climate change, and it guides these communities and programs as they design and implement concrete adaptation strategies. Te step-by-step method that the CRE suggests for the adaptation-plan design promotes participatory and interactive processes that bring together all members of a community. The SJBEP is one of the first NEP members (of 28 across the United States) to fully employ the Workbook as a tool for developing its climate-change adaptation plan.

This report consists of four chapters. The first chapter includes general background information about the Estuary, its bodies of water, and associated ecosystems and biological communities. The second chapter comments on climate changes in the Estuary, stressing those tendencies foreseen for the Caribbean and Puerto Rico. Much of this information has been compiled by the Puerto Rico Climate Change Council (the PRCCC) under the direction of Ernesto Díaz, Director of the Puerto Rican Department of Natural and Environmental Resources’ Coastal Zone Management Program. The PRCCC is an association of more than 150 researchers, scientists, agency representatives, planners, and nongovernmental organizations whose task is to assess how changes in temperature, precipitation, sea level, and other climatic parameters may affect Puerto Rico’s infrastructure and natural resources (http://pr-ccc. org/). The SJBEP has been an active member of this organization since the PRCCC’s founding in 2010.

Our mission is to restore and conserve the water quality in the Estuario de la Bahía de San Juan ecosystem as a sustainable hub of social and economic development.

We are a non-profit organization that works to protect this ecosystem within its eight municipalities: Bayamón, Carolina, Cataño, Guaynabo, Loíza, San Juan, Toa Baja, and Trujillo Alto.

Our office employs six full-time employees. Our main responsibilities are: