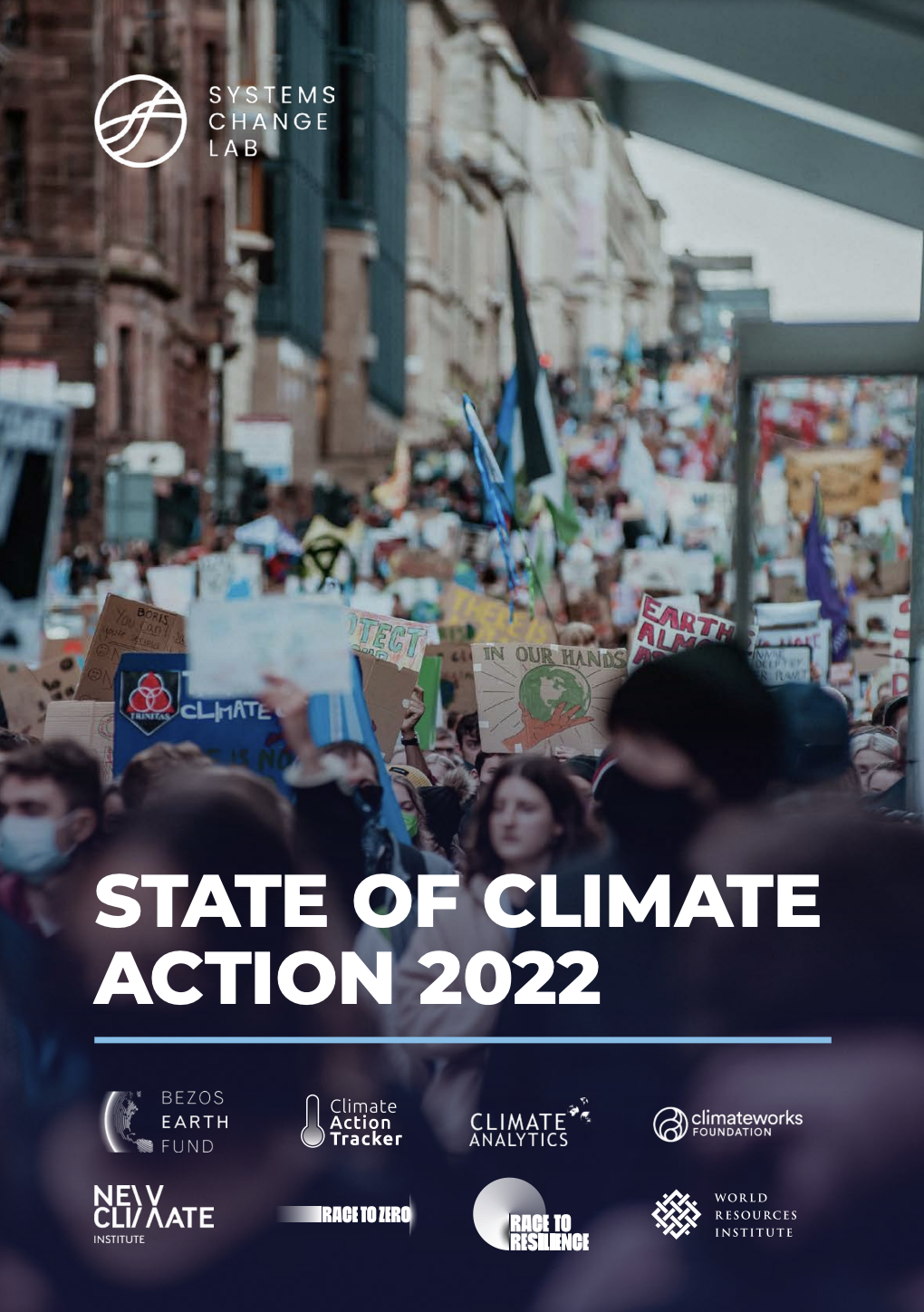 While many countries, regions, cities, companies and financial institutions have made more ambitious commitments to fight climate change, significant acceleration of action is needed this decade to keep the keep the 1.5°C temperature limit within reach.

The State of Climate Action 2022 provides a comprehensive assessment of the gap in climate action by highlighting where recent progress must accelerate over the next decade across power, buildings, industry, transport, forests and land, food and agriculture, technological carbon removal, and finance.

The report translates the systemwide transformations that the Intergovernmental Panel on Climate Change finds are necessary to limit warming to 1.5°C into 40 indicators of progress with 2030 and 2050 targets, such as phasing out unabated coal in electricity generation, effectively halting deforestation and much more.

Recent years have witnessed some bright spots, particularly among indicators directly tracking adoption of zero-carbon technologies. Despite lagging progress overall, the report does point to some encouraging signs. The adoption of zero-carbon power sources, including renewables like solar and wind power, is on the rise across the world, with recent years witnessing record-breaking growth in uptake of these technologies. From 2019 to 2021, for example, solar generation grew by 47 percent and wind by 31 percent.

The transition to electric vehicles (EVs) is also taking off, with EVs accounting for almost nine percent of passenger car sales in 2021 — a doubling from the year before. And the global share of battery electric and fuel cell electric vehicles in buses sales reached 44 percent in 2021, growing from just two percent in 2013 — an increase of over 20 times in under a decade.

While promising, these bright spots, alone, cannot deliver the systemwide transformations now needed to limit warming to 1.5°C. Although recent years have witnessed extraordinary growth in the uptake of renewables, for example, the share of electricity generated from zero-carbon power sources has experienced almost no net change since 2000, because total electricity generation has risen globally. Unabated coal-based electricity generation, although declining worldwide, continues to expand across some regions, while unabated fossil gas-based electricity, is still rising globally. Together, these trends are offsetting gains in zero-carbon power.

While they account for an increasing share of passenger car sales, EVs still make up a small fraction of the light-duty vehicle fleet globally—just 1.3% in 2021. And without additional policies, it will take time for this vehicle stock to turn over. Similarly, the transition to EVs accounts for just one facet of transforming the transportation systems, and efforts to shift to more sustainable modes of transit, such as public transit, walking, or cycling, remain well off track.

Getting on track by 2030 will require an enormous acceleration in effort.

To achieve these near-term, 1.5°C-aligned targets, the world must:

We also have never had more information about the gravity of the climate emergency, nor what needs to be done to mitigate it.

Investing in research, development, and demonstration of zero-emissions technologies; adopting policies that mandate or incentivize the transition to a 1.5°C pathway; strengthening institutions to implement these laws and regulations; establishing ambitious climate commitments and following through on them; and shifting behaviors and social norms can all help accelerate progress across all 40 indicators.

Systems Change Lab aims to spur action at the pace and scale needed to tackle some of the world’s greatest challenges: limiting global warming to 1.5 degrees C (2.7 degrees F), halting loss of biodiversity and building a just and equitable economy.

Our initiative tracks global progress for more than 70 transformational shifts across nearly every system, enabling users to compare current action against targets we need to reach by the end of this critical decade and by 2050 to protect people and the planet.