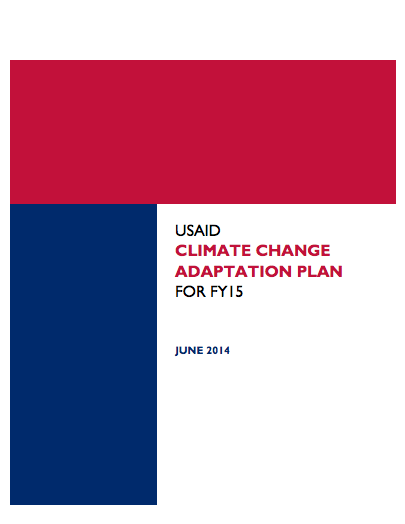 The United States Agency for International Development (USAID) prepared its first Climate Change Adaptation Plan in 2012, in accordance with Executive Order (E.O.) 13514, “Federal Leadership in Environmental, Energy, and Economic Performance.” The Plan assessed climate change risks, vulnerabilities, and opportunities for USAID’s mission, programs, and operations; discussed USAID’s current and past activities to address those issues; and identified agency-level actions to understand and address internal climate change vulnerability. The Plan was not meant to inform programming of designated Adaptation funds in USAID’s partner countries; such programming is instead guided by the USAID Climate Change and Development Strategy, which sets out principles, objectives and priorities for USAID climate change assistance with the aim of helping countries and communities prepare for and adapt to changes in climate. Similarly, while reducing greenhouse gas emissions is a vital part of any strategy to deal with climate change, it is not considered in this document, since it is comprehensively addressed in both the USAID Climate Change and Development Strategy and the Agency Sustainability Plan.

USAID submitted an updated Climate Change Adaptation Plan in 2013, which incorporated suggestions received during a 60-day public comment period, and reported on progress made against goals established in the first Plan.

In compliance with the new E.O. 13653, “Preparing the United States for the Impacts of Climate Change”, and in recognition of the new elements mandated by this E.O., USAID hereby submits in June 2014 a new Supplement, a new Agency Adaptation Policy Statement (Appendix 2), and an update to the 2013 Agency Adaptation Plan and Vulnerability Assessment (Appendix 3).