This dataset includes five spatial data layers produced in one study. Minimum exposure distance (MED) represents the distance traveled by an organism that migrates in response to climate change, assuming that the organism does not necessarily travel in a straight line but instead travels so as to minimize its exposure to dissimilar climate (in this study, dissimilar temperature) along its route (see chapter glossary for definitions of terms). Minimum cumulative exposure (MCE) represents the total exposure to dissimilar climate experienced by that organism along its route (figure 15.1). Euclidean-distance velocity is a measure of climate-change velocity assuming an organism migrates in a straight line, whereas MED-based velocity measures that exposure along the (possibly non-linear) route taken to minimize exposure to dissimilar climate. Finally, the dataset includes a ratio of MED-based velocity to Euclidean-distance velocity. 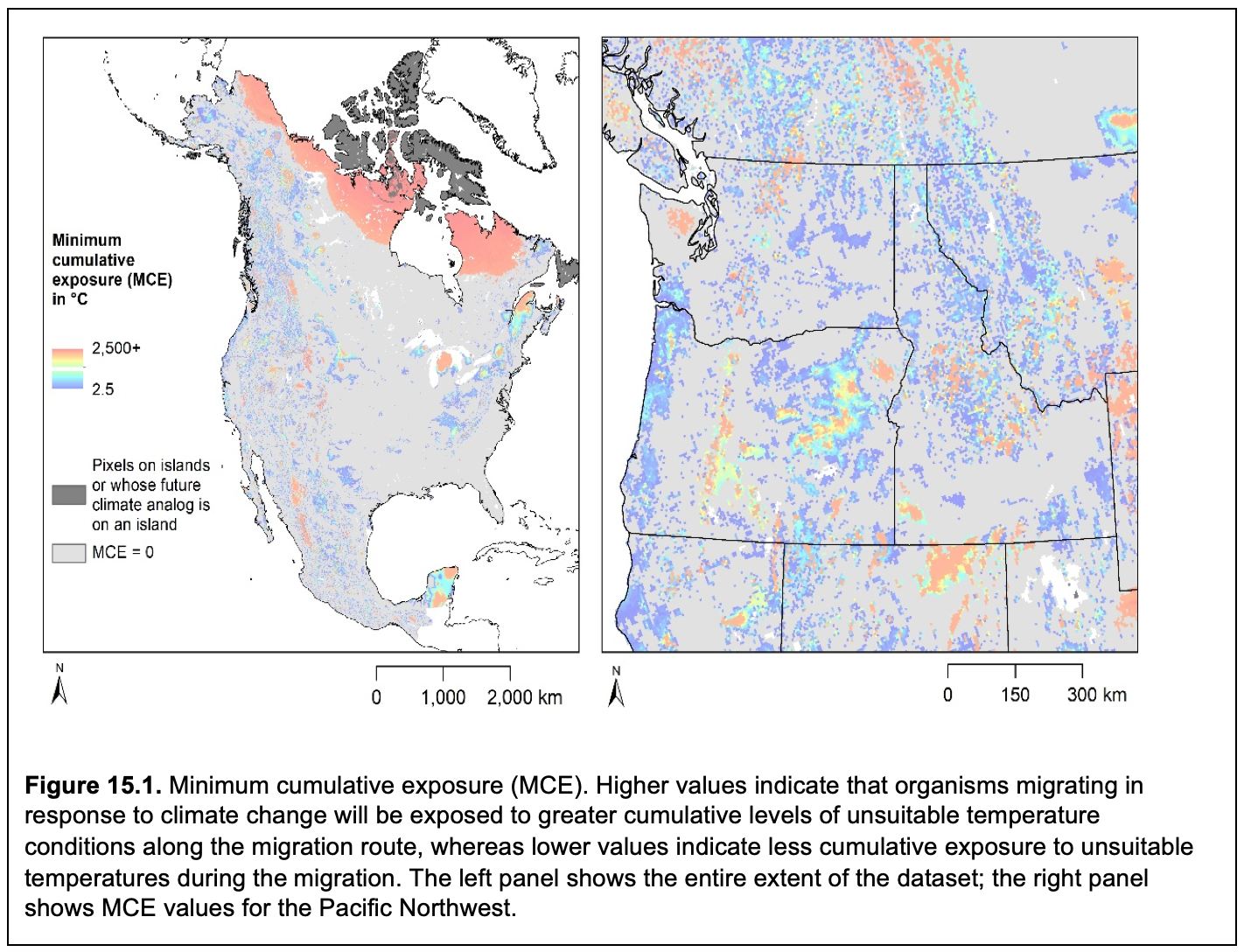 The dataset can be downloaded from: https://adaptwest.databasin.org/pages/adaptwest-velocitymed

Formal metadata is not available for this dataset.

Data type category (as defined in the Introduction to this guidebook):  Climate, landscape connectivity

Note: Pixels on islands and whose future climate analog is on an island are coded -9999 in the MED dataset and are coded -1 in all other datasets.

Baseline time period (against which future conditions were compared): 1981-2010.

Using baseline and projected future values for mean annual temperature (MAT), climate analogs (destination pixels) were identified as any pixel with future MAT that is ±0.25 °C from the baseline MAT for the pixel of interest (source pixel). Least-cost modeling was then used to identify potential migration routes from source pixels to destination pixels. These potential migration routes are the paths that organisms could take to track changing climate conditions while minimizing the "cost" of their migration, where "cost" is conceptualized as the experience of travelling through pixels of unfavorable climate. MED is the length of these potential migration routes and MED-based velocity is MED divided by 90 years (the time between baseline year 1995 and future projections in 2085). MCE was calculated using an equation (see equation 3 in the dataset citation) that includes "cost", MED, and a penalty value based on climate dissimilarity. MED-based velocity for each pixel was compared to Euclidean-distance (straight-line) velocity using a ratio. For more information, please consult the dataset citation listed in section 2 of this chapter.

This dataset relied on the following general types of models: Least-cost models

Creation of this dataset involved the following methods to change the spatial resolution of climate models (e.g. to downscale or resample climate models):

No climate downscaling was performed in this study. The mean-annual temperature input data had a resolution of 1 km, which was resampled to 5 km prior to analysis.

Euclidean-distance velocity: Higher values mean organisms will have to travel faster to "keep pace" with changing climate, assuming that they travel in straight lines.

Ratio of MED-based velocity to Euclidean-distance velocity: The higher this ratio, the greater the degree to which the migration route for an organism deviates from a straight line due to avoidance of unfavorable climate or open water.

The data layers in this dataset (MCE, MED and MED-based velocity, and Euclidean-distance velocity) represent various ways of conceptualizing climate-change vulnerability based on climate-change exposure (how rapidly climate conditions are predicted to change) and organisms' adaptive capacity (their ability to respond to climate change by tracking suitable climate conditions through time). For example, climate-change vulnerability may be especially great for species in areas with high velocity (because poorly dispersing species may not be able to "keep pace" with climate change) and/or in areas with high MCE (because species with narrow ranges of temperature tolerance would be subjected to possibly damaging levels of unsuitable temperature along migration routes).

Climate-change velocity is an important consideration in climate vulnerability assessments because it indicates the rate at which species would need to move to track favorable conditions. However, species may be forced to cross areas of less favorable conditions in their movement routes, as demonstrated by this dataset. While mountainous areas generally have relatively low velocity (because diverse microclimates are available nearby and can be reached by organisms traveling relatively short distances), these areas can have relatively high MCE values because organisms are exposed to unfavorable conditions as they travel to new microhabitats. Conversely, flat landscapes with high velocity generally have low MCE values because relatively homogenous climate conditions pose few barriers to species’ movements. Thus, MCE and MED in this dataset can be useful complements to climate-velocity datasets for evaluating constraints to species’ adaptive capacity.

The data layers in this dataset were all created using MAT to represent climate conditions, whereas actual climate conditions important to organisms may also include measures of moisture and other factors. In addition, MAT represents average temperature by definition, so this dataset does not account for exposure to temperature variability or extremes that may be important to organisms' experiences of climate change.

This dataset represents a "coarse-filter" approach to assessing climate vulnerability that does not apply to any individual species or differentiate among species. Thus it does not account for the likelihood that within a given geographic area, some species (those that can tolerate a wider range of temperatures) will actually experience lower MCE, lower MED, and lower velocity because more of their immediate surroundings will represent favorable climate conditions, whereas other species (those that are more sensitive to temperature) will experience greater MCE, MED, and velocity.

Although MED-based velocity and MCE can be used to evaluate how accessible a site is to migrating organisms, in practice that accessibility will also be influenced by non-climate landscape attributes (such as physical barriers and human land use) and the dispersal of organisms (the means by which they disperse, over what distances they are able to disperse, and the speed at which they do so).

Calculation of MCE and the velocity data layers in this dataset is sensitive to the spatial resolution of the input climate data and to several parameters used in least-cost modeling (see supplementary material in Dobrowski and Parks 2016).

Uncertainty was not quantified in the sense that the potential effects on MCE or MED owing to variability among GCMs or across greenhouse-gas scenarios was not calculated. However, the study that produced the dataset did involve a sensitivity analysis that examined the effects of the resolution of the climate data used as inputs and two parameters used in least-cost modeling (see supplementary material in Dobrowski and Parks, 2016).

Field verification of the mapped values in this dataset was not possible because the dataset represents a future condition. Mean annual temperature values for the baseline time period were obtained from the ClimateNA dataset (Wang et al. 2016). Accuracy of the baseline climate variables in the ClimateNA dataset was assessed using monthly mean observations from 4,891 weather stations across North America, located predominantly in the United States; see table 2 in Wang et al. (2016).