Land degradation, through processes such as vegetation loss and soil erosion, is a concern globally and regionally in the context of climate change. This dataset consists of a map of soil sensitivity (figure 22.1), conceptualized as a soil's ability to recover from disturbance (see chapter glossary for definitions of terms). Specifically, the study that produced this dataset examined the implications of a drying climate and spatial patterns in soil characteristics that could make soils more (or less) sensitive to drying, which in turn could make them more (or less) sensitive to disturbances such as fire, insects and disease. 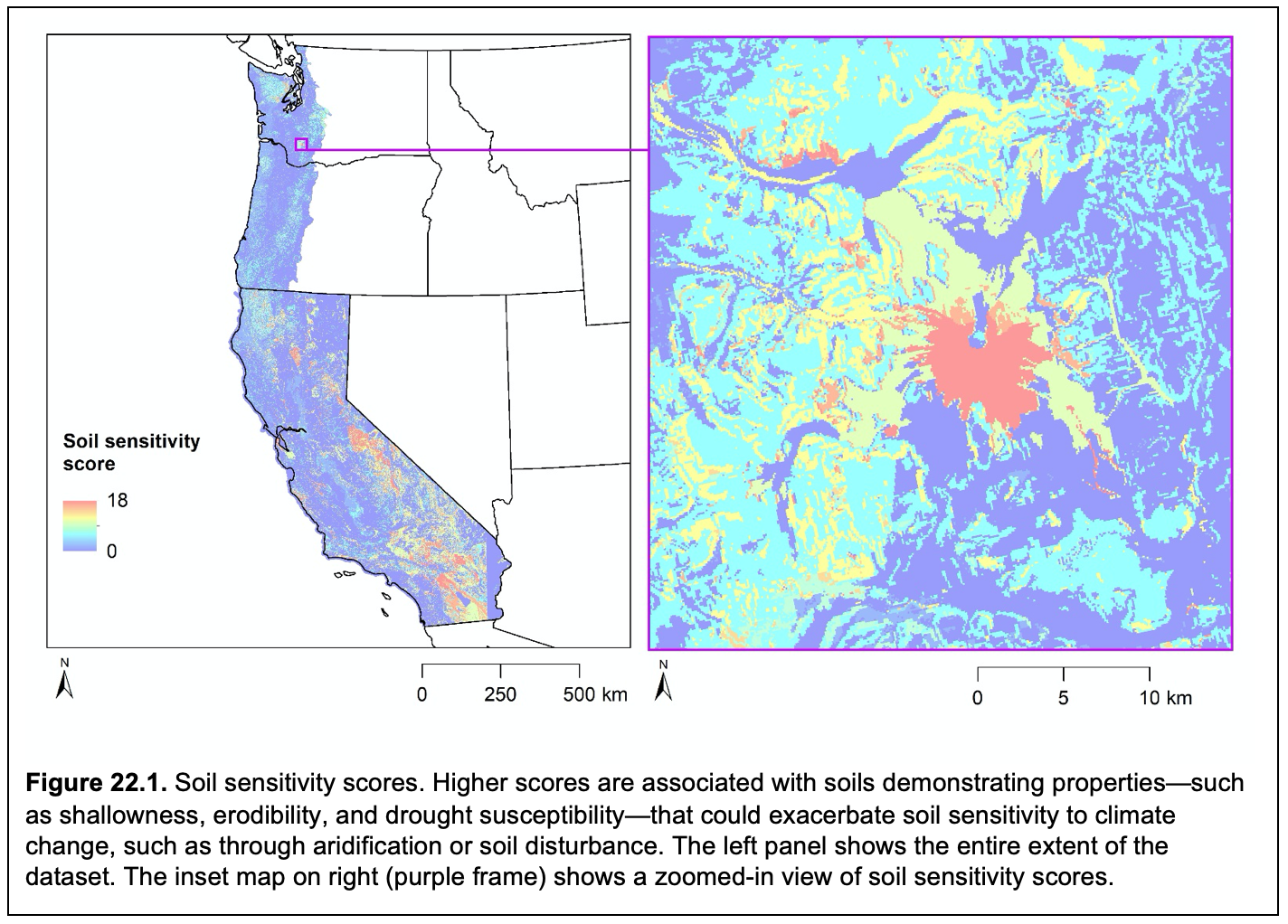 Note that this publication describes the methods used to produce this dataset but does not present the dataset itself. This publication presents a similar dataset produced using the same methods for a different geographic area (portions of Arizona, Colorado, New Mexico, Utah, Idaho, Wyoming, and Nevada).

Species or ecosystems represented: This dataset represents the soil component of a variety of ecosystems within the study domain.

Soil attributes were obtained from the Soil Survey Geographic (SSURGO) and State Soil Geographic (STATSGO) databases (Natural Resource Conservation Service, 2014a,b), and included indicators of soil depth, soil water storage, concentrations of calcium and gypsum, pH, particle size, temperature and moisture regime, and erodibility by wind and water. Soil horizons (vertical layers) were averaged together. In certain areas of the landscape, soil attributes from SSURGO were not available and so were modeled using a machine-learning approach based on available topographic, geologic, and climate datasets.

This dataset primarily represents a component of climate-change sensitivity, specifically the sensitivity of certain soils to climate change and related disturbances such as droughts and fires. Soil sensitivity to changing climate conditions and changing disturbance patterns has potential influences for plant communities and, in turn, for whole ecosystems that depend on those plant communities. For example, soils that are most sensitive to drying and least capable of storing and delivering water to plants during droughts may be especially prone to vegetation loss and erosion, with consequences for terrestrial plant and animal communities and for streams that receive eroded sediment. Thus, this dataset helps illustrate the importance of soil characteristics in mediating ecosystem-level and species-level responses to climate change, including climate-driven shifts in drought patterns.

A variety of factors could affect soil sensitivity to disturbance and climate change beyond those that were considered in creating this dataset. These include fine-scale effects of vegetation (e.g., soil stabilization, soil shading), history of disturbances such as recent fires and droughts, and various land-use practices (forest management practices, agricultural practices).

The methods used to produce the dataset are described in the publication cited in section 2, for which peer review was conducted by external review (at least two anonymous reviewers, each from a different institution).