This dataset represents the likelihood that forest soils experience prolonged summer drying. The dataset was developed using a model that incorporated variables including soil depth, available water supply, and evapotranspiration (see chapter glossary for definitions of terms). The model was calibrated using soil profiles and laboratory data for 25 sites from various forests in the Pacific Northwest to estimate the number of days per year on average that soil moisture drops below the permanent wilting point. The soil drought probability values (i.e., droughty soil index) in this dataset represent the degree to which a soil has chronically low seasonal moisture levels such that the soil would be particularly vulnerable to drought conditions during climatically dry periods (figure 23.1). 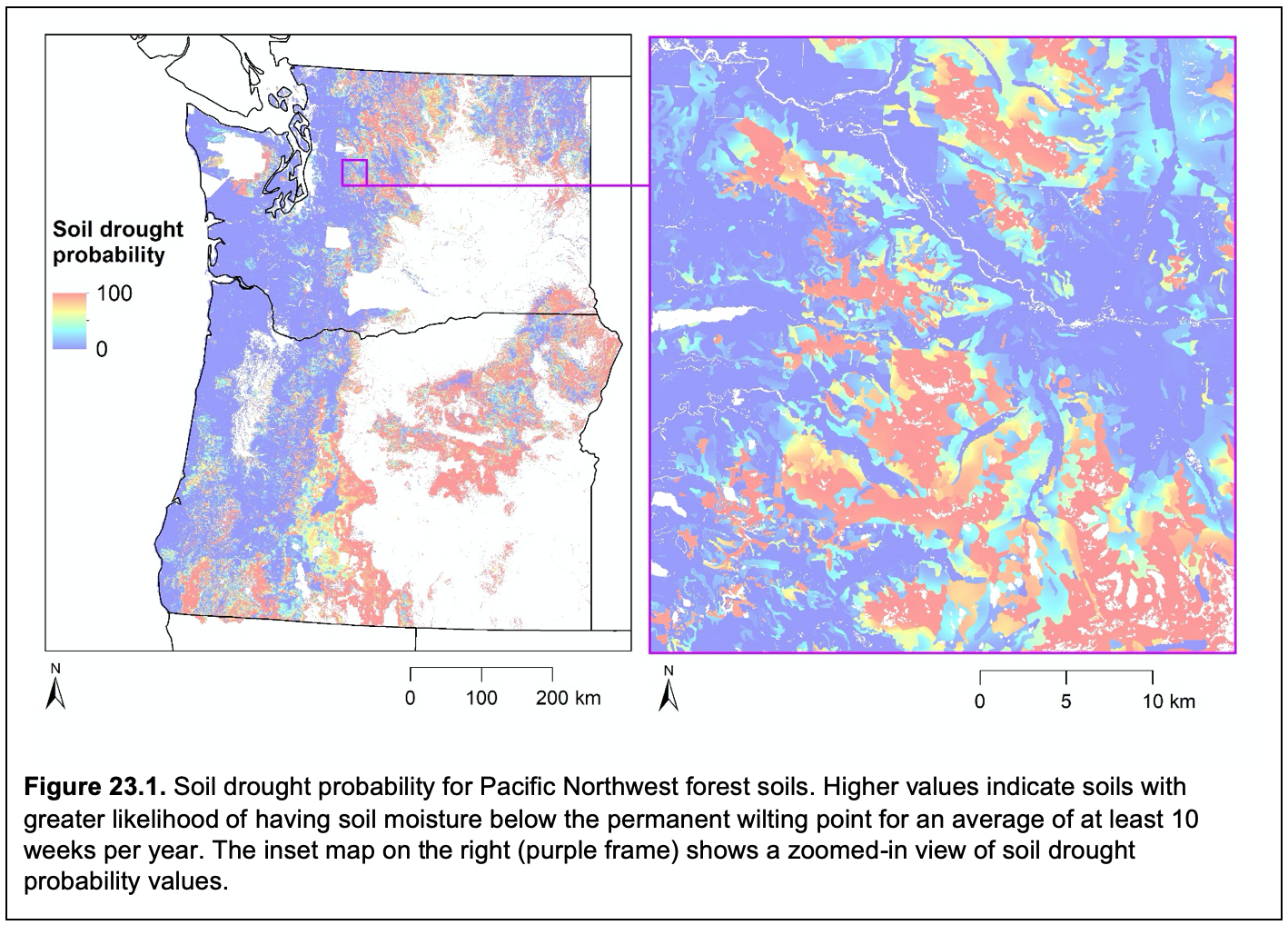 The dataset can be downloaded from: https://ecoshare.info/soils/droughty-soils-model/

Formal metadata is attached to the raster dataset and may be exported to XML format using Esri ArcCatalog.

Dataset truncation: The dataset is truncated along the USDA Forest Service, Pacific Northwest Region boundary (States of Washington and Oregon, plus a small area in northern California).

A geospatial dataset was compiled representing available water supply to a depth of 150 cm or to a root-restricting layer (whichever was less). Several data sources were compiled to calculate available water supply, including from the Soil Survey Geographic (SSURGO) Database (Natural Resource Conservation Service, 2014a), provisional (unpublished) SSURGO data, State Soil Geographic (STATSGO) Database (Natural Resource Conservation Service, 2014b), and the USDA Forest Service's Soil Resource Inventory. With the exception of STATSGO, these datasets were also used to estimate soil depth. To represent climatic moisture limitation, the ratio of actual evapotranspiration (AET) to potential evapotranspiration (PET) was calculated using averages from July through September 2000 through 2014. A model representing soil moisture was constructed using soil depth, available water supply, and AET/PET ratio, and was calibrated using daily soil moisture observations from the network of Snow Telemetry (SNOTEL) sites in Oregon and Washington. For each SNOTEL site used for calibration, laboratory data were used to estimate the permanent wilting point, and the soil moisture data were used to calculate the average number of days per year that soil moisture dropped below the permanent wilting point. For more information, please consult the dataset citation listed in section 2 of this chapter.

This dataset represents a component of climate-change sensitivity, specifically the sensitivity of soils to drying during droughts. Forest ecosystems in drought-vulnerable soil areas may be especially vulnerable to drought intensification and long-term climatic drying. By contrast, less "droughty" soils may demonstrate greater resistance to droughts (maintaining greater soil moisture for vegetation) and may aid forest resilience in recovering from droughts. As described in chapter 22, soil properties that influence soil sensitivity to droughts and other disturbances have potentially important implications for terrestrial ecosystems and for aquatic ecosystems in streams that may receive sediment from eroding soils. Soil properties thus represent an important link between the meteorological effects of climate change (e.g., changes in timing and magnitude of precipitation) and the hydrologic and ecological effects experienced by natural communities.

To represent climatic moisture limitation, the analysis that produced this dataset relied on fairly coarse-resolution (1-km) estimates of actual and potential evapotranspiration from a global model that may not accurately represent local climate conditions. Also, although soil depth can be an important constraint on availability of soil moisture for vegetation, some trees are able to access deep-water sources (e.g., deep soil layers, water tables, and weathered bedrock) that were not accounted for in this dataset. For the 25 SNOTEL sites used for calibration, most were predicted accurately by the model that produced this dataset, however, a few sites were not accurately modeled (e.g., a site in coarse volcanic soils and sites with local variation in canopy cover). In general, sites with coarse volcanic soils may be inaccurately represented by this dataset due to the difficulties in calibrating soil-moisture sensors in soils with high porosities.

In the study that produced this dataset, soil "droughtiness" was defined as a binary category (whether soil moisture falls below the permanent wilting point for more than 10 weeks per year on average). Uncertainty related to this classification is represented as a probability that a given site is "droughty".

The model that produced this dataset was calibrated using soil variables from 25 SNOTEL sites throughout the Pacific Northwest. However, the model was not independently validated because the number of available sites with soil variables in the study area did not allow for an independent dataset for model validation.