This dataset includes modeled historical (1975-2005) and future (2071-2090, RCP 8.5) projections of April 1st snow-water equivalent (SWE) and snow-residence time (SRT) (figure 4.1; see chapter glossary for definitions of terms). The model that produced these datasets uses average winter (November through March) temperature and total winter precipitation. The model was validated using data from 497 Snow Telemetry (SNOTEL) sites in the western United States. Changes in SWE and SRT are presented both as absolute changes (future values minus historical values) and as percent changes. 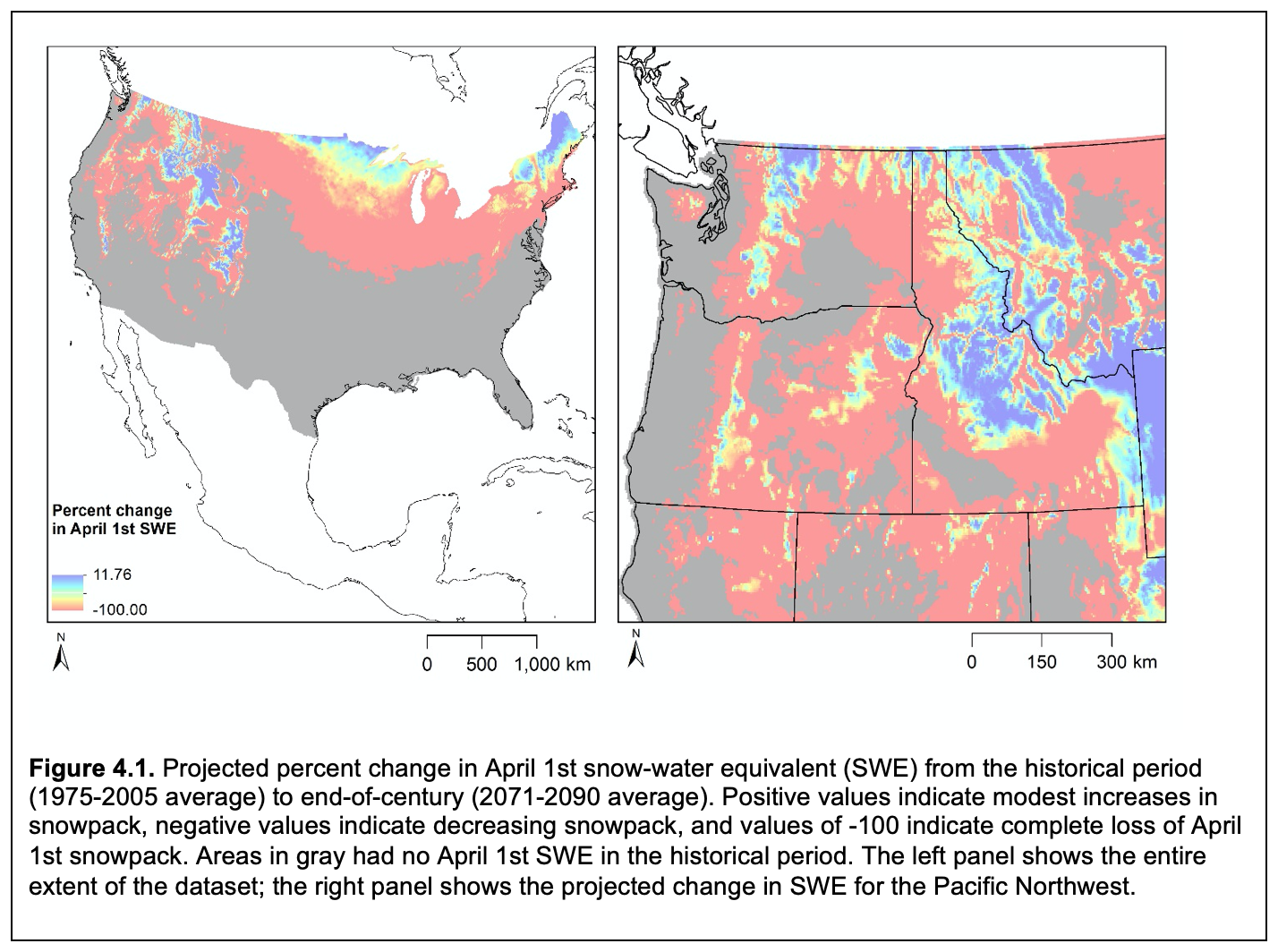 Lute, A., and C. Luce. 2017. Are model transferability and complexity antithetical? Insights from validation of a variable-complexity empirical snow model in space and time. Water Resources Research 53:8825–8850.

The dataset can be downloaded from: https://www.fs.fed.us/rm/boise/AWAE/projects/NFS-regional-climate-change-maps/categories/us-raster-layers.html

These data can be viewed online at the U.S. Department of Agriculture (USDA) Forest Service Geospatial Data Discovery page, including historical, future, absolute change, and percent change grids (rasters) for SRT and SWE:

These are also accessible as web services: https://apps.fs.usda.gov/fsgisx01/rest/services/RDW_Climate

A story map was created by the U.S. Forest Service Office of Sustainability and Climate to present and compare these datasets: https://usfs.maps.arcgis.com/apps/MapSeries/index.html?appid=4d6e58342f5a451dbe9e9c946bf76f85

Formal metadata can be downloaded from: https://www.fs.fed.us/rm/boise/AWAE/projects/NFS-regional-climate-change-maps/downloads/NationalForestClimateChangeMapsMetadata.pdf

Data type category (as defined in the Introduction to this guidebook): Hydrology, climate, (winter) animal habitat

Dataset truncation: The dataset is truncated along the United States borders with Canada and Mexico.

Baseline time period (against which future conditions were compared): 1975-2005.

First, a model was developed using cumulative winter (November through March) precipitation and average winter temperature to predict April 1st SWE and SRT (Luce et al. 2014). The model was calibrated and verified using data from approximately 500 SNOTEL sites. As documented in Lute and Luce (2017), models of varying complexity (i.e., models with varying numbers of parameters to be adjusted by calibration) were compared and it was found that the simpler models (with fewer parameters) generally outperformed the more complex models. Therefore, a relatively simple model was chosen to create the spatial layers of future SWE and SRT. Using that model, gridded projections of future winter temperature and precipitation from the MACAv2-Metdata dataset (Abatzoglou and Brown 2012) were used to create gridded projections of April 1st SWE and SRT. For more information, please consult the dataset citation listed in section 2 of this chapter.

Creation of this dataset involved the following methods to change the spatial resolution of climate models (e.g. to downscale or resample climate models):

SWE and SRT are measured in mm and days, respectively, for both the historical and future time periods. Higher SWE values indicate more snow present on April 1st; areas with higher SRT values are projected to have snow retained for a larger number of days each winter. For the absolute change rasters, large negative values in April 1st SWE indicate the largest April 1st SWE decreases. A few areas show positive values for this layer, representing projected increases in April 1st SWE. Similarly, large negative values of absolute change in SRT indicate the largest decreases in the amount of time each winter that snow is expected to be present. For both April 1st SWE and SRT, the lowest possible percent value is -100, which indicates complete loss of snowpack in the future.

The data layers in this dataset primarily represent one important component of climate-change exposure, namely the degree to which areas are expected to experience reduced winter snowpack. In some areas of the Pacific Northwest, transitions from rain to snow and earlier seasonal timing of snowmelt are major concerns related to climate-change effects on ecosystems and watershed hydrology. Snow conditions are ecologically important to a number of plant and animal species in the Pacific Northwest, especially those adapted to mountain habitats (e.g., alpine and subalpine species). For animal species, the seasonal timing, depth, and spatial extent of snowpack can affect access to food resources, ability to hide or escape from predators, and ease of movement across the landscape. For plant species, these snowpack characteristics can affect growth rates, seasonal availability of soil moisture, and seedling establishment. In addition, in watersheds where streams have large contributions from snowmelt, changes in snowpack patterns can have important consequences for watershed hydrology, including changes in timing of peak streamflow or reductions in late-season streamflow.

Because of these concerns, anticipated reductions in snowpack may need to be considered along with information on species and ecosystem-level sensitivity to snowpack changes and information on species’ capacity to adapt to changing snowpack conditions. Projected snowpack declines across much of the Pacific Northwest illustrate the importance of changes in watershed hydrology as a critical linkage between climate change and effects on species and ecosystems.

In the study that produced this dataset, model validations were better for April 1st SWE than for SRT, and the dataset authors suggest this may be because there is a stronger physical basis for modeling SWE than SRT (Lute and Luce, 2017). These models used only climate variables to predict changes in snowpack and the input climate variables were at 4-km resolution. As a result, finer-scale influences on snowpack dynamics, such as those based on microclimates produced by topography, are not represented in these data layers. Additionally, this dataset does not represent sensitivity or adaptive capacity, in terms of the ways in which species or ecosystems are expected to respond to projected snowpack reductions.

Several uncertainty metrics of the underlying snow models are provided in Lute and Luce (2017). Nash-Sutcliffe efficiency (NSE) values exceeded 0.71 for SWE and 0.64 for SRT (NSE = 1 indicates a perfect match between a model and observations, whereas NSE = 0 indicates model predictive ability as accurate as the mean of the observed data). Using all data, the site-wise cross validation was 85% for SWE and 81% for SRT. Although uncertainty of the mapped values (i.e., changes in SRT and April 1st SWE) are not provided with the maps, information necessary for calculating them is available; see Lute and Luce (2017).

Modeled snow variables from the historical (baseline) period were field verified (Lute and Luce 2017). Field verification of the projected mapped values in this dataset was not possible because the dataset represents a future condition. Two-fold validations in Lute and Luce (2017) were designed to assess the capability of the model to extrapolate to conditions other than those of calibration.

Prior to dataset publication, peer review was conducted by external review (at least two anonymous reviewers, each from a different institution). The underlying models were published in two peer-reviewed publications.

Lute, A., and C. Luce. 2017. Are model transferability and complexity antithetical? Insights from validation of a variable-complexity empirical snow model in space and time. Water Resources Research 53:8825–8850.