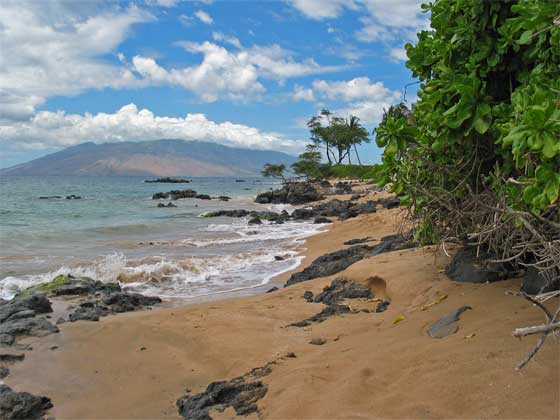 Photo attributed to Michael Oswald. This work has been released into the public domain by its author. No endorsement by licensor implied.

Coastal erosion has been, and continues to be, a major issue in Hawaii. It is estimated that Oahu has lost 29% of its beaches from seawall construction resulting in beach erosion, while 72% of the beaches in Kauai are chronically eroding. In addition, the long-term effects of sea level rise are expected to accelerate and expand beach erosion and result in a landward shift of the beach system. While the State of Hawaii currently designates shoreline development setbacks at 40 feet from the upper reaches of the waterline, many counties have chosen to establish stricter coastal construction setbacks based on the rate of erosion over 50-100 year time periods.

Beach property in front of homes, hotels, and other built structures is subject to erosion from waves and tidal action. Climate change, particularly sea level rise, is likely to accelerate the rate of coastal erosion, resulting in a loss of shorelines, beaches, and property. Currently, the State of Hawaii’s Coastal Zone Management Act discourages shoreline hardening techniques including seawall construction, and designates shoreline setback lines at 40 feet from the upper reaches of highest high tide, although individual counties do have the authority to establish deeper setbacks. As more information has become available regarding the causes of beach loss (e.g., seawall construction) and the potential for climate changes to exacerbate coastal erosion, many counties in Hawaii have chosen to enact stricter coastal construction setback policies.

Dr. Chip Fletcher at the University of Hawaii, an expert in coastal hazards and shoreline evolution, worked with different counties in Hawaii to modify coastal construction setback lines from a flat 40-foot line to setbacks based on the rate of erosion at each parcel of land (termed “rate-based setback”). For example, Maui County’s setback rule takes the annual rate of erosion over a 50-year time period and adds a 25 foot buffer. Kauai County recently increased the minimum setback from 40 to 60 feet for all development within 500 feet of the shoreline. Kauai County also takes into consideration the size of the lot, altering setback line options based on the average lot depth. The setback rules are constantly subject to change and vary by county.

In 2009, the Center for Island Climate Adaptation and Policy (formerly a center within the University of Hawaii Sea Grant College Program) produced a toolkit on sea level rise, shoreline impacts, and setbacks and recommendations for amending setback policies, which was presented to a Senate committee with the intent of basing setback policies on erosion rates rather than the current 40-foot rule. These setbacks often focus on new or future development; addressing the harm to and from existing development along Hawaii’s shorelines can be a challenge for county and state management in addressing coastal erosion. Kauai County has one of the most progressive shoreline setback rules in the State of Hawaii and the United States. While every county in Hawaii has been implementing individual setback rules, the hope is that the state will officially adopt the rate-based setback method in order to establish progressive statewide coastal construction setback lines.