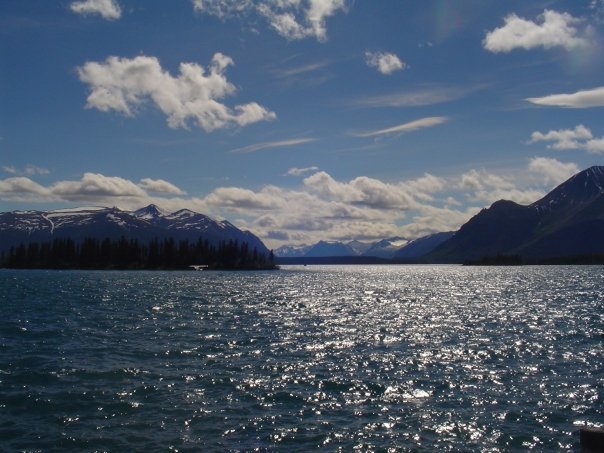 Photo attributed to Ghostreveries. This work has been released into the public domain by its author. No endorsement by licensor implied.

Atlin is a primarily native community located in northwestern British Columbia, Canada. In 2007, the Northern Climate ExChange (NCE) hosted a week-long climate change community awareness and preparation workshop. The goal of the workshop was to discuss ways that climate change may impact the livelihoods of Atlin residents and to identify community vulnerabilities and opportunities. Since then, NCE has worked with Atlin to assess the community's adaptive capacity and create a more formalized climate change adaptation plan.

Atlin is located on mainland British Columbia and is home to the Taku River Tlingit First Nation. In 2004, Atlin had 450 permanent residents. The native population has observed local impacts of climate-related changes, including warmer winters, increased humidity, increased precipitation, increased thundershowers, reduced cold snaps, later freeze up, glacial retreat, spring flooding, and new species in the area. It is anticipated that the region could experience changes in the hydrologic regime, increased forest fires, and changes in the regional fish and game population as a result of climate change.

In March 2007, the Northern Climate ExChange (NCE) held a week-long adaptation planning workshop in Atlin, British Columbia. The workshop was funded by the Indian and Northern Affairs’ Aboriginal and Northern Affairs Community Adaptation Program. NCE selected Atlin because its community demonstrated general climate change awareness, was engaged in other climate-related projects, and had a high level of community capacity and involvement.

The goal of the workshop was to discuss climate change issues that may affect the livelihoods of the native population residing in Atlin. Over 50 community members participated (15% of the population) in the workshop; participants were separated into three working groups to discuss observed impacts of climate change, community vulnerabilities, adaptive capacity, and existing tools and frameworks available to cope with these changes.

The workshop included presentations by guest expert speakers along with local community members. Three expert working group sessions were developed based upon three themes: land-based occupations and traditions, local economy, and infrastructure and planning. Over the weekend, NCE held another workshop to educate the public on climate change including presentations on the basics of climate change; an introduction to adaptation; community-based adaptation planning case studies; climate modeling; and mainstreaming climate change into planning and policies.

In 2009, NCE returned to Atlin to help the community begin to develop a climate change adaptation plan. Two workshops were held in November 2009 and February 2010 to discuss the community's biggest climate change concerns and their adaptive capacity. Results showed that the primary factors contributing to the community's vulnerabilities include physical isolation, exposure of infrastructure to extreme weather, a small economy, lack of jurisdictional and political coordination, and lack of access to important environmental/climate data.

In March 2011, the Atlin Climate Change Adaptation Plan was released. The plan's purpose is to "address community vulnerability to those environmental hazards exacerbated by climate change through community capacity development." The community and project team from Northern Climate ExChange identified many strategies including improving communication and coordination, building capacity through training workshops, and improving emergency preparedness measures, among others.