Atuliqtuq: A Collaborative Approach in Support of the Nunavut Climate Change Adaptation Plan 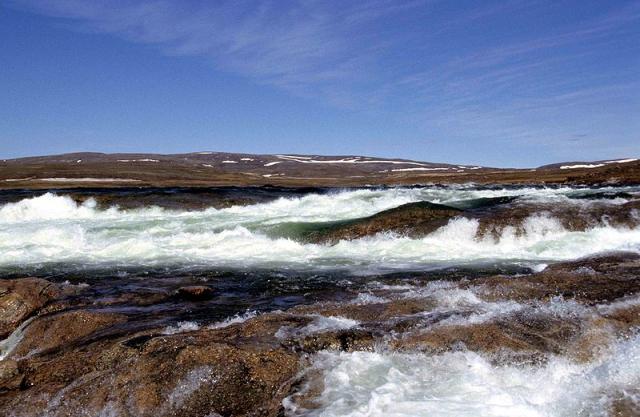 To increase provincial and local ability to adapt to climate change, the Government of Nunavut joined together with the Canadian Institute of Planners (CIP), Natural Resources Canada (NRCan), and the Department of Indian Affairs and Northern Development (DIAND) to form a partnership to support local communities while helping to develop Nunavut’s climate change adaptation strategy. The partnership’s effort, often called Atuliqtuq (‘coming into force’), developed projects to increase understanding of how climate impacts will affect the region and develop case studies for other communities to follow.

Residents of Nunavut have observed alarming changes in their environment. Decreasing levels of permafrost and sea ice, rising sea levels, and severe coastal erosion have caused local Nunavut communities to fear for the safety and sustainability of their communities.

In 2003, the Government of Nunavut created a strategy to prepare the territory for climate change and increase the local community’s resilience and adaptive capacity.  Two key priorities of the Nunavut Climate Change Strategy called for increasing climate change knowledge and building the capacity of the territory and its local governments to take adaptation action. To help achieve these goals, the Government of Nunavut joined together with the CIP, DIAND, and NRCan to form a multiyear project, the Nunavut Climate Change Partnership. The primary objective of this partnership is to increase the capacity of Nunavut communities to begin planning and implementing effective adaptation at a local level.

The partnership’s effort is often referred to as Atuliqtuq or ‘coming into force’ in Inuktitut. Atuliqtuq perfectly describes the partnership’s goals as they worked together to bring each organization’s expertise and resources together to safeguard the local communities of Nunavut and their cultures.

The multi-year project engages local institutions such as the Ittaq Heritage and Research Centre in Clyde River and the Nunavut Research Institute in Iqaluit to ensure that the information collected includes Inuit Quajimajatuqangit, or traditional environmental knowledge (TEK), and that the policy solutions defined by the process would be in the spirit of the culture of the area.

The scientific support for the studies conducted was provided by NRCan and the sea level rise and coastal hazards assessment as well as the water analysis will serve as models for other future regional assessments in other territories and provinces.

The CIP is developing a Community Climate Change Adaptation Toolkit, which will incorporate existing scientific information, data collected by the partnership, and best practices from community adaptation action plans into a set of guidelines Nunavut communities will be able to use to produce their own adaptation plans.

Nunavut -- "our land" in the Inuktitut language - has been home to Inuit for millennia and part of Canada for more than a century. Embracing both traditional knowledge and values and the new opportunities presented by technologies like the Internet, the Government of Nunavut now provides a wide range of services tailored to the unique needs of approximately 29,500 residents.