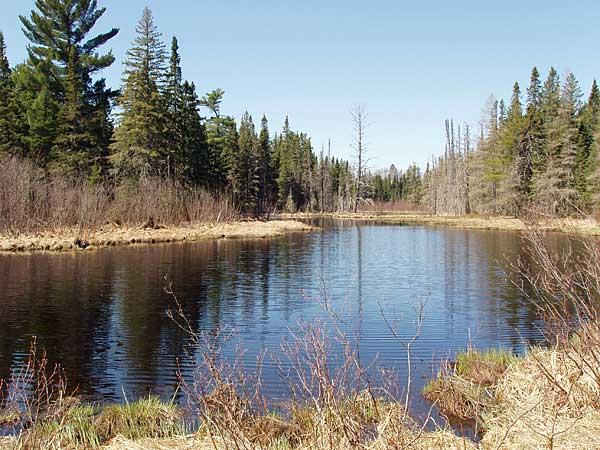 Photo attributed to Save the Wild UP. Incorporated here under the Creative Commons Attribution-Share Alike 2.0 Generic license. No endorsement by licensor implied.

In 2006, Kennecott Minerals applied for permits to develop a mine in the Yellow Dog Plains located in Michigan’s Upper Peninsula. To garner support for enhanced environmental protection, the Yellow Dog Watershed Preserve, a watershed protection group, solicited a report to assess the impacts climate change may pose to regional mining practices. The report reviews climate change projections and impacts and then attempts to assess how this will affect the mining industry and its environmental footprint.

The climate is already changing in the Great Lakes region. In general, the climate is becoming wetter and warmer, primarily in the cold season. This has manifested in warmer winters, earlier spring melts, and lower surface water levels in summer and fall. These changes have the potential to negatively affect the mining industry, as well as other energy and water-intensive users.

In 2002, the Kennecott Minerals Corporation, a subsidiary of Rio Tinto, found ore deposits of copper, gold, and nickel in Michigan’s Upper Peninsula near productive salmon streams. Local citizens were concerned because the ore deposits were surrounded with sulfide, which, when exposed to air and water, transforms into sulfuric acid; mining activities therefore could present dire consequences to the local watershed and surrounding environment. Despite concerns, Kennecott Minerals was awarded a permit to begin mining the ore deposits and construction began in 2010. In an effort to preserve the region’s environmental integrity, the Yellow Dog Watershed Preserve, a local watershed protection group, sponsored a report, Climate Change, the Great Lakes, and Kennecott’s Eagle Mine, to assess the impacts that climate change may pose to the Kennecott mining industry.

The study was funded through a grant with Freshwater Future. The report was written by an outside contractor who conducted personal interviews with climate scientists and mining companies and reviewed existing literature. The goal of the report was to provide talking points that would allow the Yellow Dog Watershed Preserve to leverage changes in regional mining practices.

Though not meant to be comprehensive, the report reviews much of the available relevant literature to determine how regional climate change is projected to affect the mining industry, the environment, and humans in the Great Lakes region, and its potential effects on the Eagle Mine in Marquette County, Michigan. It offers recommendations to groups interested in protecting the environment and human health from the regional effects of climate change. Kennecott Eagle Minerals did not noticeably consider climate change impacts in their Eagle Mine design or during their permitting process. The Yellow Dog Watershed Preserve plans to use the report to initiate a discussion with regional leaders and politicians in the hopes of encouraging Kennecott Eagle Minerals to revise its environmental protection plans. The Yellow Dog Watershed Preserve hopes that improvements made in the mine plan in light of climate change would also help to safeguard the watershed.

Mining is a large part of the historical economic vitality of the Upper Peninsula of Michigan. However, mining also has the potential to significantly affect the natural environment, creating the need for mining regulations to be reevaluated and revised to incorporate climate change impacts into future and current mine designs. The Yellow Dog Watershed Preserve is beginning to contact state and local lawmakers to raise awareness of the need for immediate inclusion and implementation of climate-related impacts in all mining regulations. Initially the group wanted to take the report to local municipalities, but a 2009 law has limited local authority and intervention in mining operations. Their focus is now on the State of Michigan, specifically the Upper Peninsula. The Yellow Dog Watershed Preserve sent a letter to local municipalities and federal and state representatives to raise awareness about the report.