As part of its mission, Maine Sea Grant educates communities on important marine and coastal issues. For the last decade, Maine Sea Grant has been engaged in efforts to survey coastal property owners and municipal officials to better understand the climate risks and vulnerabilities that coastal communities face, adaptation activities that could be taken in response to vulnerabilities, and barriers to action. These surveys elucidate the barriers that coastal property owners and officials are faced with in preparing for climate change and coastal hazards, and encourage collaboration between stakeholders to create and implement responses.

Between 2007 and 2009, Maine Sea Grant interviewed coastal property owners and municipal officials in order to gauge beliefs and perceptions on climate change and coastal hazards. The ultimate goal was to increase understanding and coastal community resilience by facilitating communication and cooperation between coastal property owners, officials, and others to prepare for climate change and coastal hazards in the state. This study was expanded upon and additional surveys were conducted in 2015, 2017, and 2018. The impacts of highest concern along Maine’s coast include sea-level rise, erosion, flooding, increased storminess, and habitat loss and/or alteration.

The needs assessment consisted of six focus groups (70 participants) from 11 coastal communities and surveys sent to nearly 7,000 coastal property owners and 240 municipal officials throughout 2007 and 2008. Participants were asked about information needs; attitudes towards climate change and coastal hazards; behaviors of coastal property owners concerning shoreline protection and management; observed changes to the coastline (e.g., erosion rates); and attitudes regarding federal-state-local lines of communication and resulting action or inaction in shoreline management. Some key results from the assessment included:

Project leads used this feedback to design the overall outreach message and materials, and create an outreach plan. The evaluation component was meant to allow Maine Sea Grant to analyze the effectiveness of their educational efforts in altering the perceptions and, ultimately, the behavior of coastal property owners and municipal officials toward climate change and sea level rise. A small-scale evaluation of the educational materials demonstrated that understanding of the issues was increased; a behavior shift would require more detailed and longer-term follow up efforts.

Maine Sea Grant has continued to build upon this work with additional surveys conducted in 2015, 2017, and 2018. The most recent survey, sent to municipal officials in 2018, was designed to help Maine Sea Grant better understand the climate risks and vulnerabilities that coastal communities face, adaptation activities that municipalities are undertaking, and barriers to adaptation action. Some key findings include: (1) the need for fine-scale, interactive maps and data and the ability to analyze and interpret data; (2) the need to better understand social vulnerability factors and incorporate social vulnerability assessments into adaptation planning efforts; (3) the importance of local champions and their ability to intuitively employ best practices for community engagement.

Maine Sea Grant is also engaged in other coastal community resilience efforts, including funding modeling work to generate custom maps of coastal flooding, sea level rise, and storms; releasing Maine’s Climate Future 2015, which examines trends in key indicators of a changing climate in Maine; and engaging in the Maine Ocean and Coastal Acidification Partnership, among other efforts.

Oregon Sea Grant produced a five-part documentary for Maine Sea Grant. Forty-five participants at two June 2009 workshops in Kennebunk and Rockland viewed the documentary and then engaged in peer and expert panel discussion about the results of the project. In addition, a final technical report was released in 2010 about Maine’s efforts on the project, Climate Variability and Coastal Community Resilience: Developing and Testing a National Model and State-based Outreach.

In 2018, Maine Sea Grant and the University of Maine Cooperative Extension released a fact sheet, Counteracting the Myth of Dry Feet in Dutch Planning for Flood Defense: Lessons for New England, which examined the approaches used by the Dutch to engage stakeholders in planning for flood defense. In 2019, a journal article, Preparing for a Changing Climate: The State of Adaptation Planning in Maine’s Coastal Communities, was released, which details the findings of the 2018 survey with municipal officials. 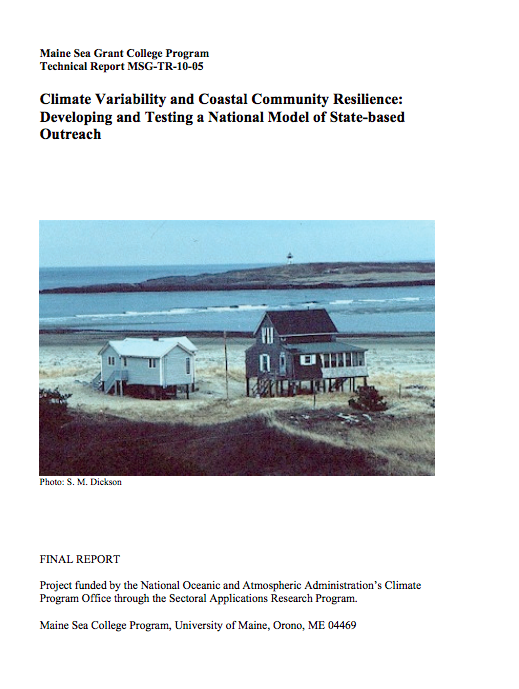