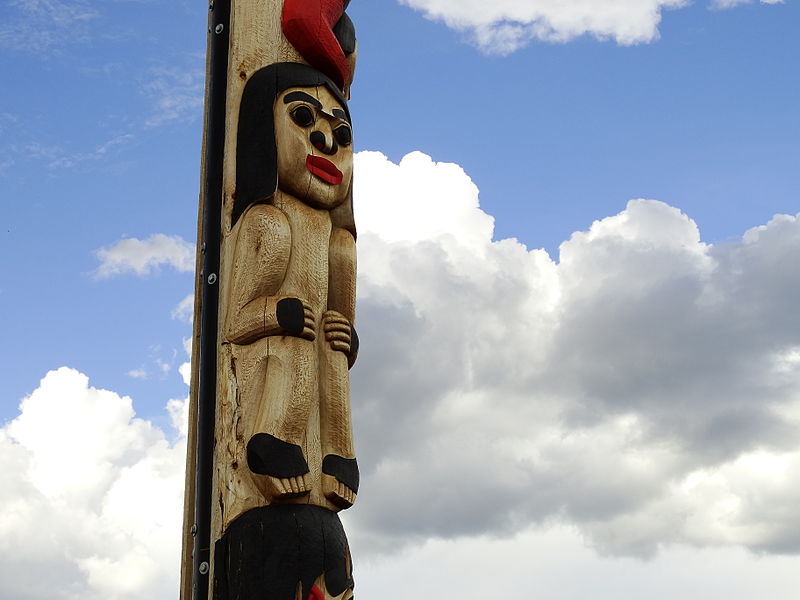 Dawson is located in Yukon, Canada and is home to the First Nation Trondek Hwech’In. The city is located at the confluence of the Klondike and Yukon Rivers near the Arctic Circle; it is on the edge of the discontinuous permafrost zone wherein permafrost is up to 60 meters deep under portions of Dawson. Permafrost temperature monitoring began in 2007 to assess changing temperatures but data to date are insufficient to provide any trend analysis. Air temperatures can range from -60°C in winter to 35°C in summer. It has been estimated that mean temperatures have increased by 6.2°C per century in Dawson with a higher rate of change in nighttime lows relative to daytime highs.

Important employers in Dawson include Federal and Provincial Government schools, a branch of the Yukon College, and Federal offices. In addition, in 1896, Dawson became a regional hub for the Gold Rush and some mines in the area are still active seasonally; as such, gold rush tourism has also served to bolster the Dawson economy. Many residents are subsistence hunters and rely on the bounty of natural resources in the Dawson area to survive. The 2006 census estimated the total population to be 1,327 residents but this number does not include the substantial seasonal population that enters Dawson during the summer months. Because Dawson houses a large seasonal and transient population, changing climate conditions may disproportionately affect permanent residents compared to the portion of Dawson’s population that is accustomed to moving annually.

The Dawson Climate Change Adaptation Project (DCAP) was proposed to help Dawson residents prepare for any adverse conditions or opportunities climate change may present. Dawson was selected by the Northern Climate ExChange to pilot a climate change adaptation strategy because of their prior community interest in climate change, existing infrastructure (i.e. a sustainability plan), existence of relevant research partners, and interest from First Nations. The first step was to establish a local advisory committee to steer the project. One key goal of the local advisory committee was to engage the community in discussions of climate-related risks, vulnerabilities and values.

The DCAP was divided into three parts: a vulnerability assessment, an adaptation plan, and an implementation plan. The Northern Climate ExChange has committed to implementing three adaptation projects within Yukon communities by 2012. Dawson began the DCAP in 2008 in collaboration with the Northern Climate ExChange, the International Polar Year Dawson Community Adaptation and Vulnerability in Arctic Regions (CAVIAR) program, and the Dawson Local Advisory Committee.

The Canadian Regional Climate Model (CRCM) projects that annual temperature in Dawson will increase by 2.5-3.5°C by 2050 due to climate change. Winter is expected to exhibit the greatest extent of warming, 4-6°C. This area is projected to experience some of the largest winter time temperature excursions out of anywhere in the Western North America region. Summer temperatures are expected to increase by 1.5-2.5°C. Precipitation is expected to increase by 10-40% but there is a high degree of uncertainty with these estimations. Climate change is also expected to cause increasingly unpredictable weather which will have far-reaching consequences to residents that rely upon predictable weather for their subsistence hunting.

Predicted non-community impacts of climate change to the Dawson region include:

The report also outlines opportunities that may arise due to regional climate change. These opportunities vary from increased mushroom harvests to reduced heating costs. Each opportunity is ranked based upon its likelihood of occurrence, adaptive capacity, and community priority.

There were many challenges when creating the climate change adaptation plan including climatic variability, lack of communication amongst existing climate related networks, sociopolitical constraints, lack of capacity, desire to mitigate rather than adapt, lack of measurable goals and desired outcomes, and a general lack of high-resolution, good quality, downscaled climate change science. Some facilitating factors of the project include the high adaptability of historically resource dependent communities, local climate knowledge, community concern about climate change, strong community engagement, and an increasing body of knowledge to draw from.

The Dawson Climate Change Adaptation Plan provides a comprehensive analysis of climate change related impacts to Dawson, community vulnerabilities, adaptation strategies, and community opportunities. Everything is ranked based upon the same scale which eases comparison of vulnerabilities and allows the community to prioritize adaptation strategies. Projects selected for implementation should have a broad appeal, high relevance, and measurable results amongst other criteria.

Yukon is larger than life with breathtaking wilderness, a wealth of opportunities, abundant natural resources and friendly welcoming people. It is home to a skilled and educated work force, modern infrastructure and endless options for outdoor activities year-round. 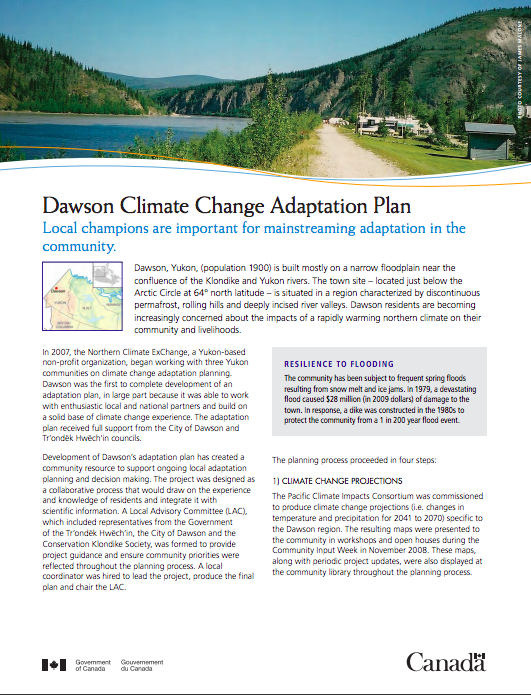