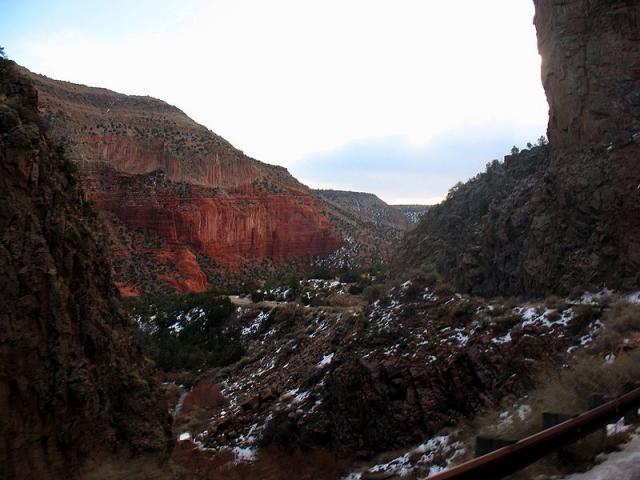 Photo attributed to Honinbou. This work has been released into the public domain by its author. No endorsement by licensor implied.

The Jemez Mountain Climate Change Adaptation Workshop brought together over 50 managers, conservation practitioners, scientists, and others working in the Jemez region to:

SWCCI’s aim is to increase regional capacity in the four corner states (Colorado, New Mexico, Arizona, Utah) to address climate change by providing them with the information and tools needed through regional adaptation workshops. The SWCCI project’s objective is to expand impact assessment activities into all four corner states, equip them with the tools needed to prepare and respond to climate change, and create a regional learning network to ensure continuous learning and advancement in the field.

The Jemez Mountain range, located at the southernmost tip of the Rockies, consists of nearly one million acres of forest, woodlands, and rivers and streams. The region contains many rare and endemic species that have been geographically isolated from other species, many of which are dependent on high elevation areas for survival. The Jemez Mountain range is managed and maintained by many stakeholders, including private landowners, and federal, tribal, and state land managers. The region is rich with science information, thanks in large part to two place-based scientists who have studied the area for many years. The Jemez region also has a history of regional collaboration developed through interagency fire management.

In 2009, the New Mexico chapter of TNC completed a statewide vulnerability assessment that identified the Jemez landscape as a priority area for conservation due to its exposure to climate change; for example, trends in elevated temperatures and moisture deficits and a concentration of vulnerable and endemic species. Regional climate change impacts are already evident and recent decades have been marred by severe wildfires, extensive mortality of pinyon pine, decreases in snowpack, and declines in high elevation-sensitive species. The Jemez Mountains were also identified in TNC’s Southern Rockies ecoregional assessment, and the New Mexico Department of Game and Fish’s Comprehensive Wildlife Conservation Strategy as a priority habitat.

In April 2009, with funding from the Doris Duke Foundation, TNC convened a two-day workshop in Los Alamos, New Mexico. Prior to the workshop, organizers convened a science team to help define the scientific needs of the workshop and prepare what information would be required for a successful meeting. Invited workshop participants were surveyed ahead of time to identify ecological processes of interest that would determine the adaptation planning focus during the meetings. The survey overwhelmingly pointed toward fire and water (specifically, instream flow) as the processes of interest. Workshop organizers also worked with Los Alamos National Laboratory to put together two climate change scenarios (moderate and high emissions scenarios), which would frame the discussion of impacts and adaptation actions. The moderate scenario (Scenario 1) looked at a 10-30 year planning horizon with 2-4°C increases in annual temperature that would result in increased drying and extreme drying events as well as reduced precipitation with fewer but more extreme events. The high scenario (Scenario 2) looked at a planning horizon beyond 30 years with a 2-6°C increase in annual temperature. Scenario 2 was similar in temperature range to Scenario 1 but with only 67% of the precipitation.

At the beginning of the workshop, participants received background information on climate change, an explanation of the two scenarios and the projected impacts, and an overview of the adaptation planning process that would be used during the workshop. Participants were separated into two groups based on their ecological process of interest (fire or water) and worked over the course of the workshop to construct conceptual models of drivers (climatic, ecological, social, and economic), find management intervention points, and identify potential adaptation strategies.

Largely, both groups discovered that the adaptation strategies they would employ given Scenario 1 were similar to what they were already using; however, the difference was in the ‘how and when’ these strategies should be applied. Both groups noted that normal management strategies would need to be adjusted in scale, sequencing, and priority to mitigate climate change effects. The fire group identified thinning as an example of this needed shift in ‘how and when’; thinning is a common management strategy but it could be adjusted to leave greater diversity of trees to ensure survival of a stand from a pest outbreak or fire or altered to provide more shade for a stressed stream system.

Participants found identifying strategies to employ under Scenario 2 considerably more challenging. Participants concluded that under Scenario 2, many of their current efforts would not be sufficient to address the changes that their system would be facing and a realignment of management would be needed. Management strategies discussed to address Scenario 2 included responses with increased human intervention (such as assisted migration) or new species mixes to facilitate future species compositions in the face of severe fires, and the use of mechanical features to compensate for the loss of vegetation structures given a megadrought. Workshop participants concluded that Scenario 2 required more planning and thinking to develop appropriate responses as well as a public awareness campaign to explain the drastic impacts the region could experience.

At the end of the meeting, the two breakout groups returned together to share adaptation strategies identified in their groups, discuss barriers and opportunities to implementing the strategies, highlight the gaps in research, and identify monitoring needs (see workshop summary report - Jemez Mountains Climate Change Adaptation Workshop: Process, Outcomes and Next Steps). Overall, the workshop provided participants with the opportunity to gain information on climate change and its impacts on the region, learn and practice implementing an adaptation planning framework, and collaborate across sectors and jurisdictions with colleagues.

The Jemez workshop had a number of successful outcomes. The workshop served as a trial run for the SWCCI project and helped shape future efforts with lessons learned on how to run a successful meeting on climate adaptation for practitioners. Following the workshop, a number of projects were developed, including an effort focused on building resilience for the rare endemic Jemez Mountains salamander. Climate change was integrated into a large landscape restoration strategy developed by the Santa Fe National Forest, the Valles Caldera National Preserve, Jemez Pueblo, New Mexico Forest and Watershed Institute, and TNC. The partnership used products developed during the workshop to put together a proposal to the national competitive Collaborative Forest Landscape Restoration Fund to implement the restoration strategy on a 210,000 acre watershed in the Southwest Jemez over a ten year period; the proposal was successfully funded in 2010.

SWCCI has since held three successful adaptation workshops in Utah, Colorado, and Arizona.

Jemez Mountains Project
Overview of Regional Climate Impacts in the Southwest: The Known, The Uncertain…
Ecological Trends and Consequences of Climate Change in the Jemez Mountains

The Nature Conservancy's New Mexico Conservation Science Program works with public and private agencies and institutions on ecological management, conservation planning, and scientific assessments to further its mission to “preserve the plants, animals, and natural communities that represent the diversity of life on Earth by protecting the lands and waters they need to survive.” 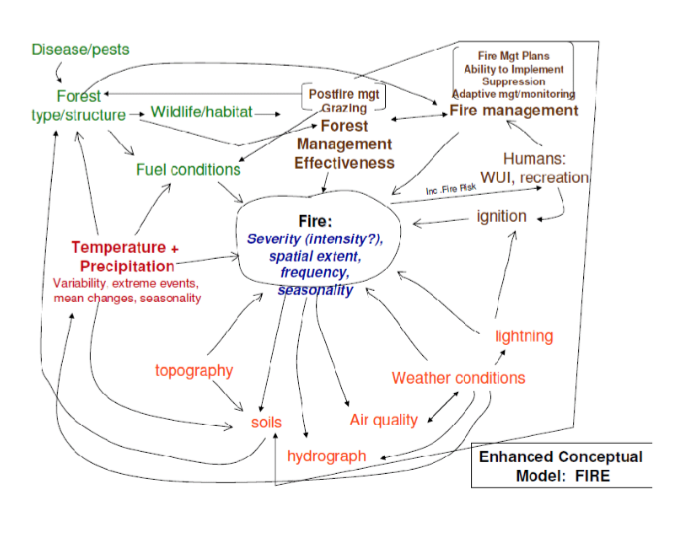