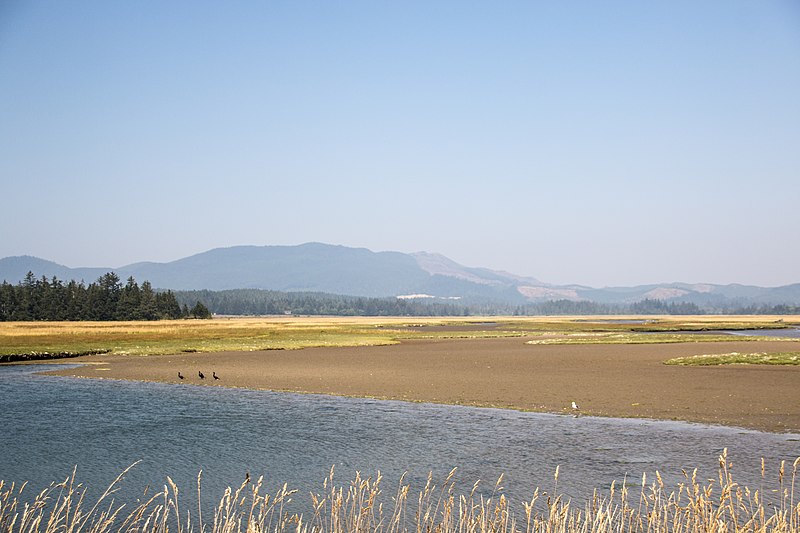 The person who is associated with this work has dedicated the work to the public domain.

In November 2010, the Oregon Department of Fish and Wildlife (ODFW), Defenders of Wildlife, Oregon Habitat Joint Venture (OHJV), and The Wetlands Conservancy held the “Workshop on Estuaries, Climate Change, and Conservation Planning” in order to identify priority climate change adaptation strategies for the state’s estuaries and enhance research and management partnerships. In addition to identifying priority adaptation strategies, participants created a list of actionable steps and resources needed to implement the strategies.

In 2006, the ODFW released the Oregon Conservation Strategy (OCS), which provides a blueprint for the conservation of the state’s native fish and wildlife and their habitats. Climate change is already affecting Oregon’s species and habitats and, in 2009, the ODFW began a process to incorporate information about climate change impacts into the OCS. As part of this process, the ODFW held a two-day workshop in 2010 with the goal of identifying priority climate change adaptation strategies for the state’s estuaries as well as expanding and strengthening research and management partnerships.

The Workshop on Estuaries, Climate Change, and Conservation Planning was held over a two-day period in November 2010 in conjunction with a meeting of the OHJV. The first day of the workshop focused on presentations about recent climate change research relevant to Oregon estuaries as well as ongoing Northwest conservation planning processes. The second day of the workshop focused on planning for climate change adaptation including an overview of projected climate change impacts on Oregon’s coastal species and habitats; new tools that can be used for conservation planning, restoration, and monitoring; a framework for incorporating climate change vulnerability information into conservation planning and the development of adaptation strategies; and break-out groups to discuss adaptation and implementation strategies for Oregon’s estuaries. Breakout groups were asked to address four questions: (1) what strategies are available to help estuaries adapt to climate change; (2) which of these strategies are of the highest priority; (3) what are initial, actionable steps to implementing these priority strategies; and (4) what information or resources will be needed?

The workshop was hosted by the ODFW, Defenders of Wildlife, OHJV, and The Wetlands Conservancy, and included participants from state and federal agencies, tribes, NGOs, and universities, among others.

Based on the results of the workshop and the breakout groups, the ODFW developed and distributed a summary document describing themes identified during presentations and large-group discussions; priority climate change adaptation strategies for Oregon’s estuaries; actionable steps toward implementing priority strategies; and information and resource needs.

The priority strategy identified to help estuaries adapt to climate change was to avoid development in the potential estuary migration zone. Actionable steps suggested included mapping zones of risk and opportunity, identifying priority areas for conservation, and incorporating information on climate change into the permit evaluation process and infrastructure planning.

ODFW continues to integrate climate change adaptation planning into its work. In 2016, ODFW updated the Oregon Conservation Strategy, which now provides a series of actions to address the impacts of climate change on Oregon’s fish and wildlife populations. Example actions include:

Oregon Department of Fish and Wildlife