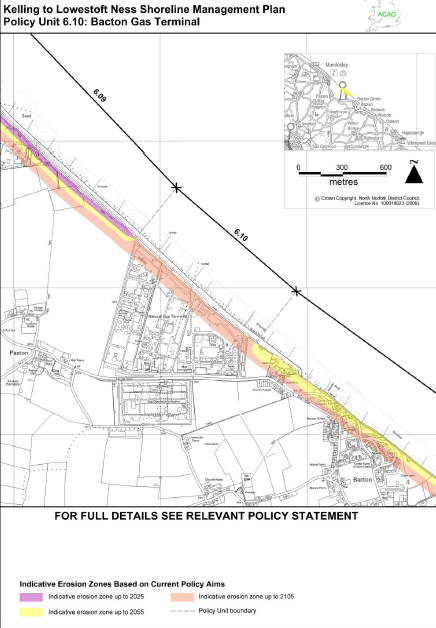 Screenshot from the Kelling to Lowestoft Ness Shoreline Management Plan

In the United Kingdom, shoreline management plans (SMPs) provide the framework for coastal regulatory officials to assess long-term changes and risks associated with coastal processes, such as tidal patterns, wave height, and sea level rise. These plans provide strategies to help reduce risks associated with coastal flooding and erosion on built and natural environments. Like most marine management plans, SMPs are non-statutory. Instead, they are high-level policy documents that take into account existing legislative requirements and compatibility with adjacent coastal areas. For each coastal stretch, local factors considered include location of coastal communities, existing defenses, power stations and public utilities, transport links, ports and harbors, industrial facilities, tourist and amenity areas, conservation and heritage sites, and the surrounding natural environment. SMPs consider existing defenses along the natural and built environment and provide guidance on coastal defense management planning for long-term sustainability. In terms of managing coastal change, the guidance document recommends four SMP policy options, depending on circumstances in a specific area:

In 2006, the UK Department for Environment, Food and Rural Affairs released an SMP guidance document to help planners identify risks of concern, including climate-driven changes such as sea level rise (Defra 2006). The guidance document also advises that planners:

There are at least 22 SMPs for the shorelines of England and Wales, each of which is further subdivided into smaller policy/management units. Two such examples that discuss shoreline management options in response to sea level rise and coastal change are the Kelling Hard to Lowestoft and Isle of Grain to South Foreland SMPs. The first plan is focused on a section of coastline in Norfolk on the eastern coast of England. The region is host to the Bacton Gas Terminal, which is a nationally important natural gas facility. Under rising sea levels, defending the current position of the terminal could potentially block up to 70% of the sediment supply for the entire SMP area, which could lead to rapid loss of beaches and property. However, while natural gas extraction remains viable in the near term, the site and subsurface pipelines need to be maintained or relocated within the site. The SMP evaluated options under several scenarios for maintaining terminal operations as long as extraction remains viable. In the short- and medium-term, planners intend to continue to protect the site by maintaining or strengthening existing timber revetment, and potentially relocating on-site assets vulnerable to erosion as needed. Over the long term (50-100 years), the terminal plans to allow for shoreline retreat to help sustain beaches and other coastal habitats, which may include decommissioning the facility or using managed realignment.

The Isle of Grain to South Foreland SMP contains a similar evaluation of the Leysdown-on-Sea to Shell Ness, a managed sand and shell beach in southeast England, which is backed by low-lying coastal grazing marsh and areas of conservation interest. Under different sea level rise scenarios, the beach may migrate inland or become completely inundated, creating new areas of estuarine habitat and potentially separating the Isle of Harty from the Isle of Sheppey. The original policy for this unit was the “Hold the Line” option. However, recent studies have indicated that there are a number of biodiversity opportunities within the unit. It is also anticipated that under rising sea levels it will become increasingly difficult to maintain the beach. If a Hold the Line policy was adopted, coastal squeeze and a diminished supply of sediment would require substantial coastal defenses and significant beach management. A Managed Realignment approach – while potentially resulting in the loss of built assets, some agricultural land, and freshwater habitats – would create a shoreline that would not require funds to maintain defenses over the next 100+ years, negate the effects of coastal squeeze, and create important estuarine habitats. Based on this evaluation, a Managed Realignment approach was adopted for the short, medium, and long term.

The UK government department responsible for safeguarding our natural environment, supporting our world-leading food and farming industry, and sustaining a thriving rural economy.