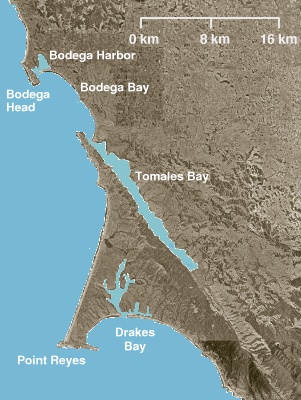 The National Park Service removed two dams in the Point Reyes National Seashore’s Estero de Limantour coastal watershed in 2008. This project was undertaken to restore habitat, fish passage, and connectivity in the park’s tidal marshes. By restoring natural ecological processes, project leaders believe that the area will be more resilient to climate change.

Two dams in the Drakes Estero Estuary, constructed in the 1950s, were targeted for removal by the National Park Service in 2007. This estuary is a major component of the Point Reyes National Seashore, designated in 1962 after the construction of the Limantour Beach and Muddy Hollow Creek dams. The construction of these dams altered freshwater flows, created fish passage barriers, and restricted connectivity between freshwater and saltwater habitats in the area. The Drakes Estero Estuary currently supports the federally threatened steelhead trout (Oncorhynchus mykiss) and California red-legged frog (Rana auroura draytonii); scientists believe that the area could support the federally endangered coho salmon (Oncorhynchus kisutch) if natural processes and connectivity are restored to support anadromous passage. In addition to acting as barriers, these dams were also believed to be at risk of failure, making them extremely vulnerable to sea level rise and increased flooding associated with climate change.

The Limantour Beach and Muddy Hollow Creek dams were removed in 2008 by the National Park Service in order to restore natural ecological processes and functions to over 15 acres of tidal marsh. Scientists and Park staff monitored the area to measure restoration success.

The removals of the Limantour Beach and Muddy Hollow Creek dams restored the natural transition zones between freshwater and saltwater habitats. The restoration of this connectivity will enhance the ability of anadromous fish (e.g. steelhead trout, coho salmon) to survive even in the face of a changing climate.