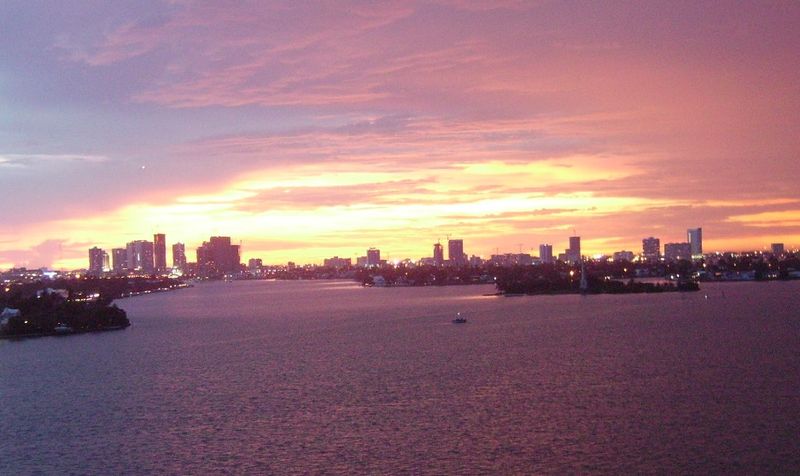 This work has been released into the public domain by its author, Averette.

The CLEO Institute (CLEO) is a non-profit, non-partisan organization working to advance climate literacy and civic engagement in Florida. They focus on education and engagement initiatives that can be scaled and replicated to impact policy on climate change at multiple scales. This case study focuses on the organization’s Florida Climate Pledge and a set of community outreach initiatives that engage key stakeholders to advance climate policy with their elected lawmakers. These initiatives are underpinned by the theory of change that with increased education and awareness of climate science and the impacts on society and communities, individuals will increasingly engage with their elected officials to advance policy change around mitigation and adaptation measures.

In 2010, Caroline Lewis, a science teacher and high school principal, founded CLEO in response to her realization of how little people understood about the climate issue as well as scientists’ call to amplify the climate change conversation in order to spur significant policy change. She advanced a theory of change that education would spark increased engagement and a critical mass of advocacy that would lead to policy change. The initial focus of CLEO was on southern Florida, which was experiencing relatively rapid sea level rise and increasing frequency and intensity of hurricanes and flooding events. However, as additional direct and indirect climate impacts are increasing felt statewide, including increased temperatures, air quality degradation, mental health impacts, and food and agriculture impacts, the organization is expanding its reach to other areas of the state and focusing on the range of climate-related issues affecting community and individual health and well-being.

All CLEO outreach programs are based on the strategy of “connecting the dots” on climate change for multiple audiences, including religious and civic organizations, youth, elected officials, municipalities, low-income communities, and other stakeholders. There is a transformational and amplification component in many of the initiatives to encourage participants after they have their initial climate literacy event to engage in advocacy in multiple ways through other CLEO programs and/or in a trainer role to increase the number of people reached. The following paragraphs describe examples of CLEO programs, including the Florida Climate Pledge.

Florida Climate Pledge
Through its ongoing Florida Climate Pledge, the group encourages education and advocacy for individuals and communities. This initiative collects signatures to send to state legislators on climate-related issues of most concern to constituents, including clean energy and coastal resources. The program encourages individuals to make testimonial videos showing a range of people and their concerns about climate. This supports the “connect the dots” campaign that is used for messaging in other outreach initiatives. There is a focus on adaptation and disaster preparedness as well as the urgency of mitigation action to advance the overall policy goal of getting local constituents to engage with their lawmakers on the need to reduce fossil fuel use. The overall message is: this is a large, important challenge but we can solve it with fact-based science and modeling in addition to action at all levels of government.

Climate 101 and Sea Level Rise Workshops; Empowering Capable Climate Communicators Symposium
Programs are informed by climate science and impacts data and knowledge from NOAA, World Resources Institute, NASA, Climate Central, IPCC, National Climate Assessment, United Nations Biodiversity Report, and the Food and Agriculture Organization of the United Nations. All CLEO programs strive to keep the latest climate science and impacts messaging simple to get to the solutions topic more quickly during presentations. CLEO staff make the science directly relevant to the needs of Floridians and do not set a stark tone that may lead to helplessness in audiences. The programs raise awareness on a range of climate impacts on communities and populations, including how increases in extreme weather and increased heat and flooding affect infectious and vector-borne disease spread, food supply, and mental health issues. These also include trickle-down effects of hurricanes and “sunny day” and King Tide flooding on communities.

Creating Climate Connections Program—Bringing Climate Awareness to Vulnerable Communities in Miami-Dade County
Issues related to social justice and access to emergency preparedness and recovery resources are the theme of several outreach initiatives in climate-vulnerable communities in Miami-Dade County, where climate resources and information are not easily accessible. One program focuses on women in low-income and climate-vulnerable communities to increase hurricane preparedness through introductory town halls and subsequent training of emerging community leaders. The program seeks to assist low-income women in becoming advocates for communities, using town hall, door-to-door conversations, and local radio station announcements. In the Little Haiti neighborhood, CLEO outreach has spurred local organizing around the climate gentrification issue (i.e. low-income, higher elevation properties being bought by high-end developers that results in displacement of long-time residents). CLEO is responding to many media requests on this topic and advances the rights of local citizens to maintain their homes in climate-resilient areas of the County.

Raising Awareness through Billboard Advertising
Through a collaboration with other entities advancing climate literacy, the CLEO Institute raises awareness through billboard advertising. The strategy is to focus on topics that resonate with people such as recent climate-related events (e.g., Hurricanes Ira and Maria) as well as blue-green algae outbreaks. The billboards use short, catchy phrases and focus on issues such as public health impacts (e.g., climate change brings more people to the hospital than tobacco use). Other topics include biodiversity, economic impacts, and displacement of populations or climate migration.

CLEO programs, funded primarily through private foundations, but also through county grants, have taken on some of the public agency outreach and education work related to natural disasters and extreme weather, including extreme heat, sea level rise, and sunny day and King Tide flooding. CLEO has a long-term collaboration with the Miami-Dade County Office of Resilience and earns fee-for-service support for staff climate training. To support their outreach efforts, which have quadrupled in the past decade, CLEO has begun applying for competitive, multi-year federal grants.

The CLEO Institute is raising awareness and promoting action on climate issues through education, engagement, and advocacy in Florida. Their organizational budget has quadrupled since their founding, greatly increasing their ability to offer outreach programs and increasing awareness and advocacy in the Miami-Dade County area. CLEO staff also lobbied successfully to create a Chief Resilience Officer position for Miami-Dade County. Through their youth engagement programs, high school students have developed into articulate youth leaders for climate. One result is the pressure that students levied to get the City of Miami and City of Miami Beach to declare climate emergencies in their jurisdictions, adding momentum to address climate change.

CLEO is currently working on ways to measure the impacts of specific policies as well as reviewing their mission and strategies to refine them to address priority policy changes. Through a strategic planning process, CLEO is asking itself questions such as: What are our ultimate goals for policy change? How can we best measure policy impact? What kind of programming and advocacy will get us there? Are people getting the information they need to better understand science and take action?

In 2020, the organization opened offices in Tallahassee and Orlando and created more billboard and digital ads to reach new audiences in northern Florida. They are now seeking to conduct larger projects through federal funding and will continue to provide climate training for county staff through a fee-for-service funding model.