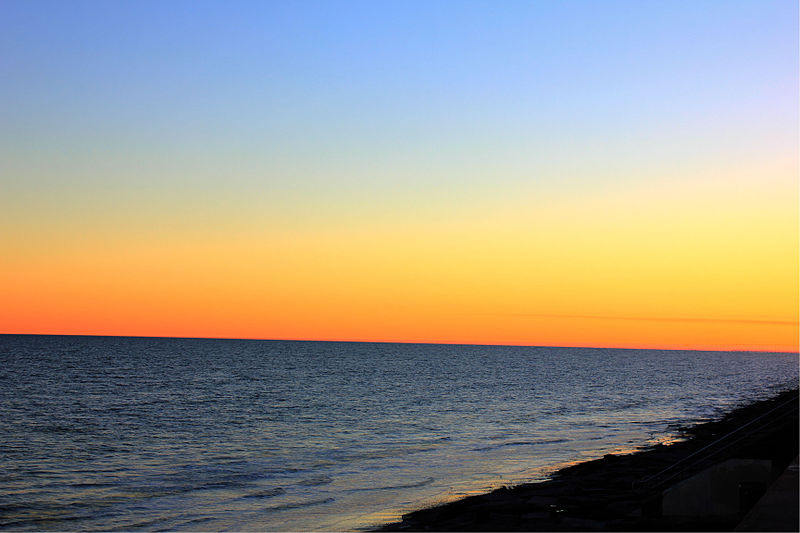 The Galveston Bay Report Card provides a scientific assessment of the Bay’s health in order to inform and engage community members on actions that protect and preserve the estuary. Residents indicated that they wanted to learn more about how climate change is impacting Galveston Bay, particularly changes in water temperatures, sea level rise, pH, dissolved oxygen, and freshwater flows. The Report Card aims to raise public awareness and promote collective action (e.g., reducing personal energy usage, volunteering on oyster reef restoration) in the conservation of Galveston Bay over the long term.

Galveston Bay, located on the southeastern coast of Texas, filters into the Gulf of Mexico. It is the largest bay in Texas at about 600 square miles, and one of the largest estuaries in the United States. This region of the United States is impacted by extreme weather and climatic events such as hurricanes, flooding, sea level rise, and increased temperatures. In addition, the region is home to Houston, one of the largest cities in the United States, which caters to a number of industries and ports. The Bay is highly valued for fisheries, tourism, and natural resources. To better understand how the Bay is changing, the Galveston Bay Foundation (GBF) conducted a State of the Bay assessment, which eventually became the Galveston Bay Report Card initiative.

The Galveston Bay Report Card provides annual scientific analyses of the health of the Bay and inspire people to take actions that protect and preserve the Bay. The Report Card focuses on trends and events and uses existing datasets (e.g., sea level rise data from the National Oceanic and Atmospheric Administration, water pH from the Texas Commission on Environmental Quality). The public requested more information on how climate change is impacting the Bay, particularly effects on water temperatures, invasive species presence, fisheries, water quality, and sea level rise. The report intentionally avoids the use of highly scientific jargon in order to be more accessible and approachable for public use.

The Report Card aims to:

Indicators of Bay health are divided into six categories of concern:

The annual budget for the Report Card is $200,000 with funds provided by the Galveston Bay Foundation and the U.S. Environmental Protection Agency. A number of partners contribute to the development of the Report Card, including the Houston Advanced Research Center (HARC) and the Houston Endowment. HARC scientists analyze available datasets for the indicators and present grades for each indicator, similar to those on a school report card (e.g., A = Excellent, D = Requires Action). Resources used to analyze indicators include datasets from the Texas General Land Office, Texas Parks and Wildlife Department, U.S. Geological Survey, National Oceanic and Atmospheric Administration, local nongovernmental organizations, and city agencies.

Each Report Card includes indicator-specific data, grades, infographics, and resources for the public, including recommended personal actions. The GBF and HARC are working with the University of Houston through the Galveston Bay Estuary Program to better understand local perceptions of how the Bay has changed over time. The GBF and HARC also conduct public input surveys before and after the Report Card release to gauge shifts in understanding around Bay health issues.

Local buy-in from stakeholders has been key to the Report Card’s success, but limited funding for the large-scale wetland restoration and land conservation needed to improve the health of the Bay has discouraged many residents. The GBF and HARC plan to continue to release Report Cards and use the results to drive awareness in federal and state agencies as well as the public. They are currently using Report Card outcomes to spread awareness around flooding issues and options through stakeholder-driven water retention projects. In 2019, the Report Card Champion Program was created to train local community groups and students on how to better advocate for the protection and conservation of the Bay. While the Report Card details climate change impacts on the coast, it does not focus the discussion on sources of blame, but rather on what can be done to address the impacts.