Getting Wise to Rising Seas in Virginia Beach

The City of Virginia Beach is working on several efforts to address sea level rise and recurrent flooding. In March 2020, the city released its Sea Level Wise Adaptation Strategy, which details climate impacts and adaptation planning outcomes. The city is using a multi-layered approach to adaptation implementation, leveraging natural and engineered solutions, building more climate-resilient infrastructure that can withstand breaches of the natural and engineered defenses, and creating prepared communities that are capable of recovering socially and economically from extreme events. The city is determining which adaptation measures need to be prioritized in the near-term and those that can be implemented in the future. Several capital improvement projects are underway to address priorities in the Adaptation Strategy.

In 2014, the City of Virginia Beach began addressing sea level rise by identifying high-risk zones and areas experiencing recurrent flooding within the city (e.g., Northern Virginia Beach, two military bases, and the Joint Expeditionary Base Little Creek-Fort Story) in collaboration with Dewberry, an engineering firm. In 2015, the city began to advocate for a capital improvement project to study sea level rise and coastal flooding (now known as Sea Level Wise). In the same year and in collaboration with the city, the credit rating agency Moody’s Investors Service queried cities in the region on if and how these municipalities were planning for sea level rise. In 2016, after a season of catastrophic flooding brought on by back-to-back storms including Hurricane Matthew, the City Council started directing funds to its stormwater program, which encompasses its sea level rise program. The City of Virginia Beach Department of Public Works is planning for 1.5 ft of sea level rise in the next 20–30 years and 3 ft in the next 50 years, using information from the 4th National Climate Assessment and sea level rise modeling from the Virginia Institute of Marine Science. These sea level rise scenarios were also adopted by Hampton Roads.

Dewberry used a comprehensive risk assessment strategy to consider future conditions and develop adaptation action recommendations for the city, including policy design standards, potential engineering solutions, and natural and nature-based features. The city set aside $3 million for the overall study and Dewberry secured additional funding through a National Oceanic and Atmospheric Administration Coastal Resilience Grant ($840,000) as well as smaller grants.

The Department of Public Works used a multi-layered adaptation framework to decide on options for implementation, incorporating weighted criteria such as cost-effectiveness in evaluating policy action items. They began at the city-wide scale by reviewing existing protection levels and hard structural approaches such as seawalls, examining which strategies provided the biggest benefit and could protect the perimeter of the city. Next, the department evaluated neighborhood-level adaptation measures that could be implemented for less money than city-wide structural approaches in the interim to help with recurrent flooding up to l.5 ft of sea level rise. These neighborhood-by-neighborhood protective measures such as elevating roadways and building levees could buy time to protect five neighborhoods in the city. Next, the department looked at “adapted structure” options. For example, they identified existing buildings or future developments that could use floodproofing or elevation, such as houses and commercial properties. Finally, nature-based approaches that could be complementary to other adaptation measuring were considered. Approaches such as marsh and wetland restoration and green infrastructure have been a big topic of conversation, particularly due to the recurrent sunny day flooding experienced by the southern part of the city. Overall, options under consideration for implementation include:

These planning processes have led to the creation of capital improvement projects (CIP). Some examples of implemented projects include:

These efforts are funded through stormwater utility fees that residents pay to the city. Part of the CIP funding plan is to increase this fee so that more projects can be funded and implemented.

As part of the development of the Sea Level Wise Strategy, the city conducted extensive public outreach as a means to promote awareness and gather experiential data from residents. For example, the city conducted listening sessions in drainage basins, bringing together people who experience differential impacts of flooding. The city used these sessions to hear firsthand from residents about local-level concerns. The city also teamed up with Old Dominion University to gather pictures of flooding from residents as a way to validate models, and used collaborative mapping exercises so that residents could identify where they lived and where they are seeing flooding. This information was then used to validate sea level rise and flooding models, showing a clear overlap between observations and projections.

Funding has been the biggest limiting factor for the City of Virginia Beach’s sea level rise adaptation efforts. The COVID-19 global pandemic has increased this challenge as a stormwater fee was not collected during 2020 due to the pandemic. Public buy-in has been a challenge for the city as well. Some members of the public still do not understand why sea level rise is a pressing concern and why stormwater utility fees are increasing as a result. In addition, there has also been some pushback from the development community regarding updated public works design standards. In response, the city has focused less on climate change and instead focused on gauge data and observations, and continues to leverage its relationships with community members.

The city has found that meeting with local communities (e.g., Norfolk, Chesapeake, Charleston) to discuss regional efforts and lessons learned has facilitated their efforts. The city is now in the process of determining what adaptation measures need to be taken in the near term and which can wait. For example, the city is undergoing a master planning process for 15 drainage basins to identify priority areas of concern.

Gregg, RM and Braddock, KN. (2021). Getting Wise to Rising Seas in Virginia Beach [Case study on a project by the City of Virginia Beach]. Product of EcoAdapt’s State of Adaptation Program. Retrieved from CAKE: https://www.cakex.org/case-studies/getting-wise-rising-seas-virginia-beach (Last updated October 2021) 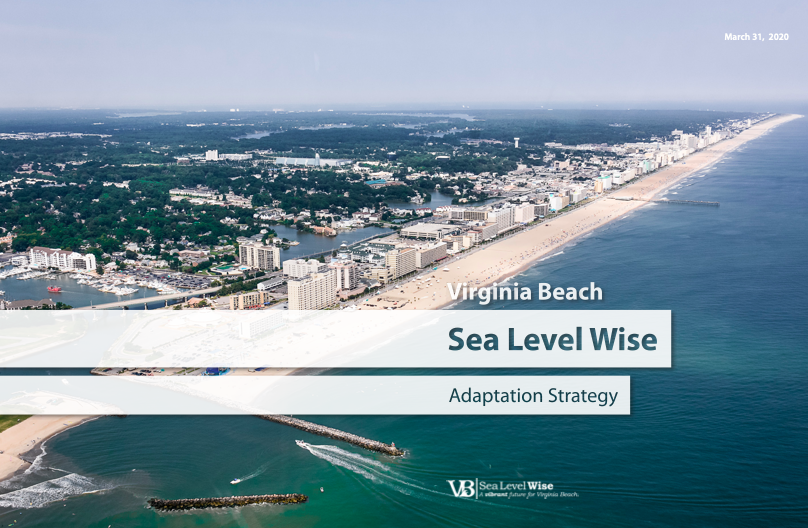 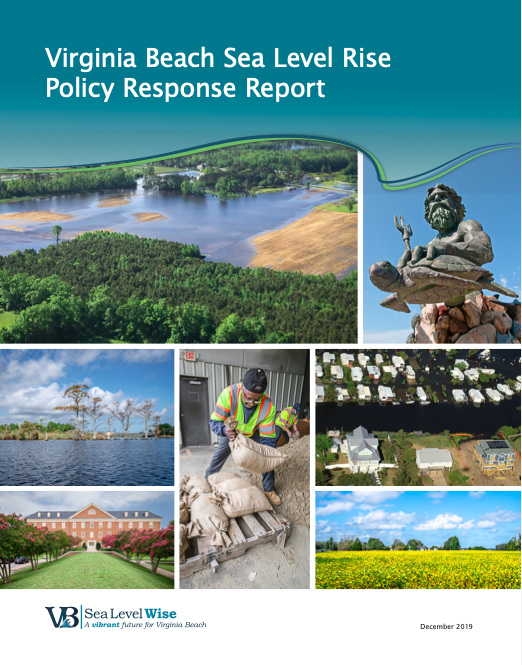