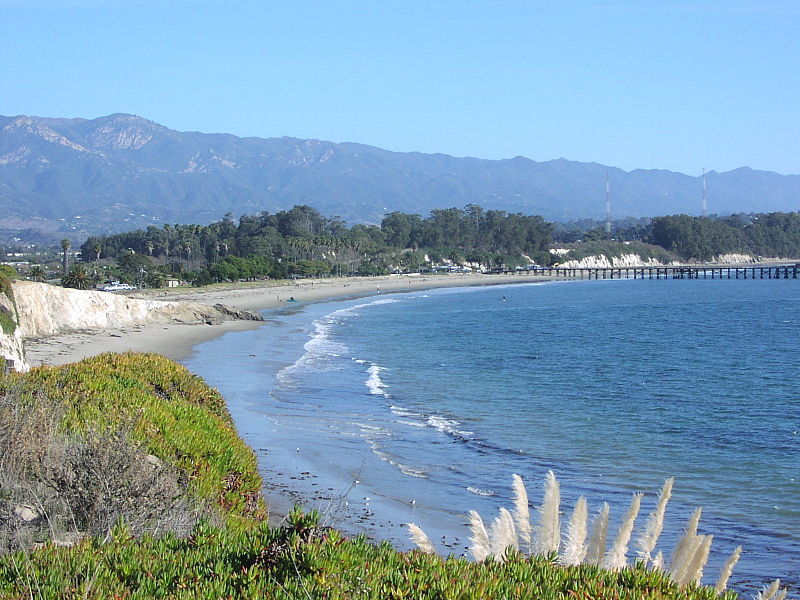 Photo attributed to Antandrus at English Wikipedia. This work has been released into the public domain by its author. No endorsement by licensor implied.

Goleta Beach State Park is located just north of Santa Barbara, California. Goleta Beach is a dynamic coastal system, with alternating patterns of accretion and erosion throughout its history. However, since the 1970s, Goleta Beach has eroded substantially, prompting Santa Barbara County to examine potential strategies to mitigate beach loss. In 2009, the Goleta Beach 2.0 Concept Planning Process (Goleta Beach 2.0) was established to reexamine managed retreat options for the park in order to mitigate coastal erosion. Managed retreat may prove to be the most resilient option for the beach as sea level rises, however, there is currently no indication that these options will be pursued over soft and hard shoreline protective measures.

Goleta Beach is a dynamic coastal system, which has fluctuated over the years as a result of storm events and other determinants (e.g., Pacific Multidecadal Oscillation). However, since the 1970s, Goleta Beach has shrunk by hundreds of feet, prompting Santa Barbara County to examine potential strategies to mitigate loss of beach area. A Goleta Beach Working Group met for several years to evaluate different approaches to lessen beach loss, and ultimately narrowed the approaches down to two major strategies: a structural solution or managed retreat. An environmental review was conducted, and a structural solution (i.e. permeable pier addition) was chosen as the preferred option and approved by county supervisors. However, the Environmental Defense Center and Surfrider organized opposition to the pier proposal and after a thorough review of the proposed addition, the California Coastal Commission voted in July 2009 to reject the county’s plan. At the time, several Coastal Commissioners encouraged the county to reexamine potential managed retreat options for the park. The permeable pier project was withdrawn, and in October 2009, the Santa Barbara County Board of Supervisors established Goleta Beach 2.0 to rethink strategies for mitigating beach loss and outline their potential recreational, environmental, and fiscal impacts.

Santa Barbara County Parks officially announced the Goleta Beach 2.0 concept in 2010, and the Santa Barbara County Board of Supervisors approved a contract with AMEC to develop  the Goleta Beach 2.0 Environmental Impact Report (EIR). The process identified several areas vulnerable to coastal erosion, including parking lots, underground utilities, and utility lines for high-pressure gas, reclaimed water, and pressurized wastewater that transit the park. In 2013, the draft EIR was completed and released for public review. The EIR evaluated the impacts of the project and identified three project alternatives to reduce or avoid impacts: (1) natural shoreline management; (2) temporary revetment retention and pilot projection projects; and (3) a westward managed retreat program. The report emphasized that existing revetments were working sufficiently to protect the beach and surrounding infrastructure.

Major components of the Goleta Beach 2.0 Managed Retreat plan included removing 1,200 feet of revetment and two parking lots, relocating essential utility lines landward out of the erosion zone, and constructing a geotextile sand bag dune system to protect the parking lot and Goleta Sanitary District’s cathodic protection vault. In 2014, the Santa Barbara County Board of Supervisors approved keeping rock revetments and parking lots in place at Goleta Beach, and installed geotextile sandbags along 415 feet of the beach. Due to major high tides and storm swells resulting from strong El Niño and 25-year storm events, the Coastal Commission approved a series of emergency permits for Goleta Beach in 2017. The permits allowed for additional rock revetment installation to protect the Goleta Sanitary District sewer outfall from further damage and the surrounding park from erosion. Additionally, a protective sand berm was installed and geotextile sandbags were replaced with revetment. The total cost of this emergency construction and monitoring was $950,000. The work conducted under the permits is considered to be temporary and the county will have to obtain a coastal development permit from the Coastal Commission to permanently retain the installations.

The county has concluded that “soft” protective measures (e.g., sand berms, geotextile sand bags) have been ineffective for Goleta Beach due to quick erosion or destruction due to high tides and flooding. While revetments are usually associated with accelerated erosion and displacement of sediment, these effects do not appear to be happening at Goleta Beach. There is no indication that proposed managed retreat solutions (e.g., relocating parking lots and utilities) for Goleta Beach are scheduled to be implemented. The county cited the limited space available for relocation due to nearby Highway 217 and the Goleta Slough as a challenge for the managed retreat options for Goleta Beach.

Information was collected from interviews and online resources. Updated 10/21.

The Santa Barbara County Community Services Department - Parks Division has a long standing history of providing outstanding outdoor recreation opportunities. We are proud to offer the full range of activities with our day use parks, beaches, pools, group areas, trails, on & off leash dog parks, open spaces, campgrounds and our largest facility Cachuma Lake Recreation Area. The County of Santa Barbara park system has 24 day use parks, 2 camping parks, 45 open spaces and 12 beach areas for a grand total of 8,595 acres.