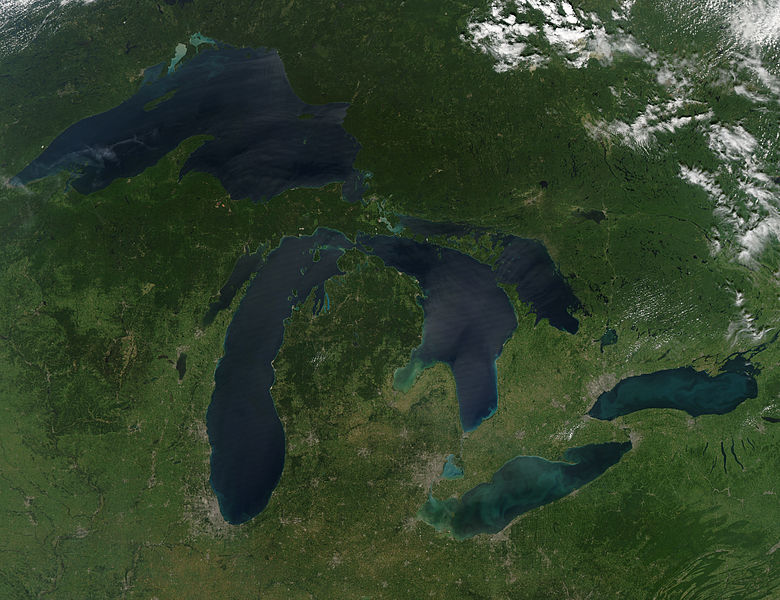 NASA image by Jeff Schmaltz, MODIS Rapid Response Team, Goddard Space Flight. This file is in the public domain in the United States because it was solely created by NASA. No endorsement by licensor implied.

The Great Lakes Restoration Initiative (GLRI) was created to coordinate restoration efforts in the region. The GLRI released an Action Plan in 2010, which builds upon the 2005 Great Lakes Region Collaboration Strategy, and is the basis upon which Great Lakes restoration will be planned and budgeted at the federal level. Climate change has been recognized as a major threat to the region and, to the extent possible, will be addressed through different focus areas, including toxics, invasives, pollution, restoration, education, communication, and monitoring.

The Great Lakes contain approximately 20% of the world’s freshwater surface supply and 95% of the surface freshwater in the United States (GLRI 2010). Issues in the region include habitat and species loss from development, water flow alteration, and habitat fragmentation; degraded air and water quality from nonpoint source pollution, legacy contaminants in sediments, and riverine and atmospheric deposition; invasive species establishment; and information gaps that hinder decision making (GLRI 2010); climate change is expected to compound these problems.

the process of assisting the recovery of an ecosystem that has been degraded, damaged or destroyed. For purposes of this Initiative, restoration includes ecosystem protection, enhancement, rehabilitation and remediation. A restored ecosystem is resilient; its chemical, physical, and biological functions and processes provide the requisite conditions for life. A restored ecosystem contains sustainable populations of native plant and animal species and their habitats. Potential threats or further damage have been eliminated or reduced as much as possible and the restored ecosystem is able to withstand future threats.

Each focus area is further defined with goals, objectives, ecological targets, and specific actions. The GLRI Action Plan is implemented and evaluated by the Great Lakes Interagency Task Force. Those who receive GLRI funding are required to submit reports that measure and evaluate progress on the goals of individual projects as well as the overall goals of the GLRI. All projects may be reviewed by the public through the Great Lakes Accountability System (GLAS); the database allows users to search by focus area, funding recipients, and geography (states, Areas of Concern, or watersheds).

Through the GLRI, the Environmental Protection Agency administers funding on its own and in collaboration with other federal agencies to support restoration efforts in the region. Money is awarded for both federal projects and other projects by non-federal groups that support the goals outlined in the Action Plan. Although climate change is not listed as one of the primary focus areas, the Action Plan states that restoration activities that address the outlined priorities will “increase the resiliency of the ecosystem [and therefore] help the Great Lakes adapt to climate change” (GLRI 2010).

As part of the September 2010 workshop Climate Change in the Great Lakes: Advancing the Regional Discussion, participant comments were solicited on the GLRI and other federal funding programs. Participants recommended that the GLRI incorporate climate change into request for proposals, enhance collaboration and knowledge exchange, integrate adaptation into urban sustainability efforts, and conduct all efforts with both short- and long-term goals in mind (Hinderer et al. 2010). In the 2012 request for proposals, the Environmental Protection Agency listed increasing climate change resilience in Great Lakes communities as one of the primary funding categories, specifically to fund vulnerability assessments and the development and implementation of adaptation plans.

The Great Lakes Restoration Initiative is the largest investment in the Great Lakes in two decades. A task force of 11 federal agencies developed an action plan to implement the initiative. This action plan covers fiscal years 2010 through 2014 and addresses five urgent issues: