This image has been released into the public domain because it contains materials that originally came from the United States Navy. No endorsement by licensor implied.

In 2010, the Federal Highway Administration (FHWA) selected five pilot teams from across the country to test a climate change vulnerability assessment model. This conceptual model guided transportation agencies through the process of collecting and integrating climate and asset data in order to identify critical vulnerabilities. During this year-long pilot program, the pilot teams formed a community of practice, exchanged ideas, presented draft results, and participated in a series of webinars and peer exchanges. FHWA used the feedback and lessons learned from the pilot projects to revise the draft conceptual model into the Climate Change & Extreme Weather Vulnerability Assessment Framework. The framework is available on the FHWA website. This case study is focused on Hampton Roads, Virginia.

Hampton Roads, Virginia, is a low-lying, coastal metropolitan region that serves as the site for multiple military installations, including the largest naval base on the east coast of the United States. This pilot study used an existing decision model to evaluate how the transportation priorities of the region might be influenced by a variety of climate change, economic, regulatory, travel-demand, wear-and-tear, environmental, and technology scenarios. The Virginia Department of Transportation (VDOT) led this pilot in partnership with the University of Virginia, the Hampton Roads Planning District Commission (HRPDC), and Hampton Roads Transportation Planning Organization (HRTPO).

This effort used scenario-based preferences and multi-criteria decision analysis to reorder four types of transportation priorities based on climate change and other factors. The selected scenarios combined climate change with other planning factors, such as population and industrial growth. These other planning factors could increase or decrease the consequences associated with the climate factors alone.

For each of the five scenarios, the decision model re-ordered the following transportation priorities:

Existing Transportation Assets. VDOT compiled an initial selection of over 1,000 existing transportation assets from its asset management system. To narrow the scope, the project team screened for high-risk assets using criteria that included traffic volume, elevation relative to mean sea level, location on a maintenance priority route, and location on a hurricane evacuation route. The narrowed selection consisted of about thirty major assets including two traffic management centers and three bridges, including the Chesapeake Bay Bridge-Tunnel.

Transportation Analysis Zones (TAZs). To demonstrate the impact that regional distinctions may have on overall planning, the project team identified 40 TAZs that were vulnerable to coastal inundation. The selected TAZs represented a diversity of terrain, population densities, and locations.

Develop climate and climate-plus scenarios. The project team created realistic sets of scenarios based on combinations of climate factors, such as sea level rise, and non-climate factors, such as economic conditions, wear-and-tear, travel demand, and environmental/ecological change and regulations. Importantly, the scenario-based tool allowed decision-makers to explore the interactions among a variety of planning factors (see Figure 1). For example, the project team analyzed the following sets of interactions:

In order to calibrate the model, the first step was to reproduce the baseline prioritizations of the candidate projects for the LRTP by applying the existing weights, scores, and criteria. Once the model was calibrated to the existing non-climate prioritization, the project team worked with HRPDC/HRTPO/VDOT planners and engineers to assess how the criteria weights might shift across the several climate and non-climate scenarios. For example, the importance of criteria such as accessibility or safety/security might increase or decrease under scenarios that combine the factors sea level rise and increased traffic demand. The Excel model applied updated weights to the calculations and generated revised priorities under each scenario (for example, see Figure 2).

The pilot found that the most influential scenario for priority-setting was a combination of sea level rise and storm surge with increased traffic demand (see Figure 3). This scenario significantly disrupted existing priorities for projects, assets, TAZs, and policies. Interestingly, prioritization of planned projects was most sensitive to the climate-change-only scenario.

In order to share their methods with the broader transportation community, the project team transferred their decision model into an Excel workbook tool. These editable workbooks guide users through the process of identifying assets, selecting criteria, building a base case, and developing climate and climate-plus scenarios.

Figure 3: The study produced a visualization of the scores from five climate scenarios to the four asset categories. The results indicate that asset prioritization is most sensitive to climate and increased traffic demand.

Leverage existing science. Multiple projects have evaluated the vulnerability of the Hampton Roads region to sea level rise and storm surge. However, the project team realized that this existing research had not yet been incorporated into the LRTP for the region. Since the LRTP has a 30-year planning horizon and is regularly updated, it provides an ideal avenue for adaptation planning.

Communicate to stakeholders and the public. Over the past year, the project team held presentations to familiarize HRTPO and HRPDC staff with the results of this work. HRTPO may consider changes to its Project Prioritization Tool as it begins to work on the region's next LRTP. The project team also released several publications in the literature describing how climate change can influence priority setting for transportation infrastructure assets.

University of Virginia - Center for Risk Management of Engineering Systems

Founded in 1987, the Center for Risk Management of Engineering Systems develops theory, methodology, and technology to assist in the management of risk in a variety of engineering systems. We deploy solutions to a number of emerging problems.

The HRPDC Mission is to:

The Hampton Roads Transportation Planning Organization (HRTPO) is the body created by the Hampton Roads localities and appropriate state and federal agencies to perform the duties of an MPO under the federal regulations. 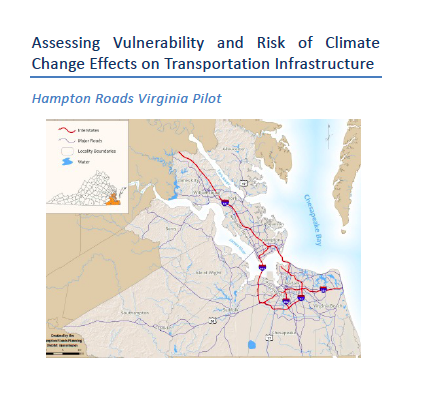