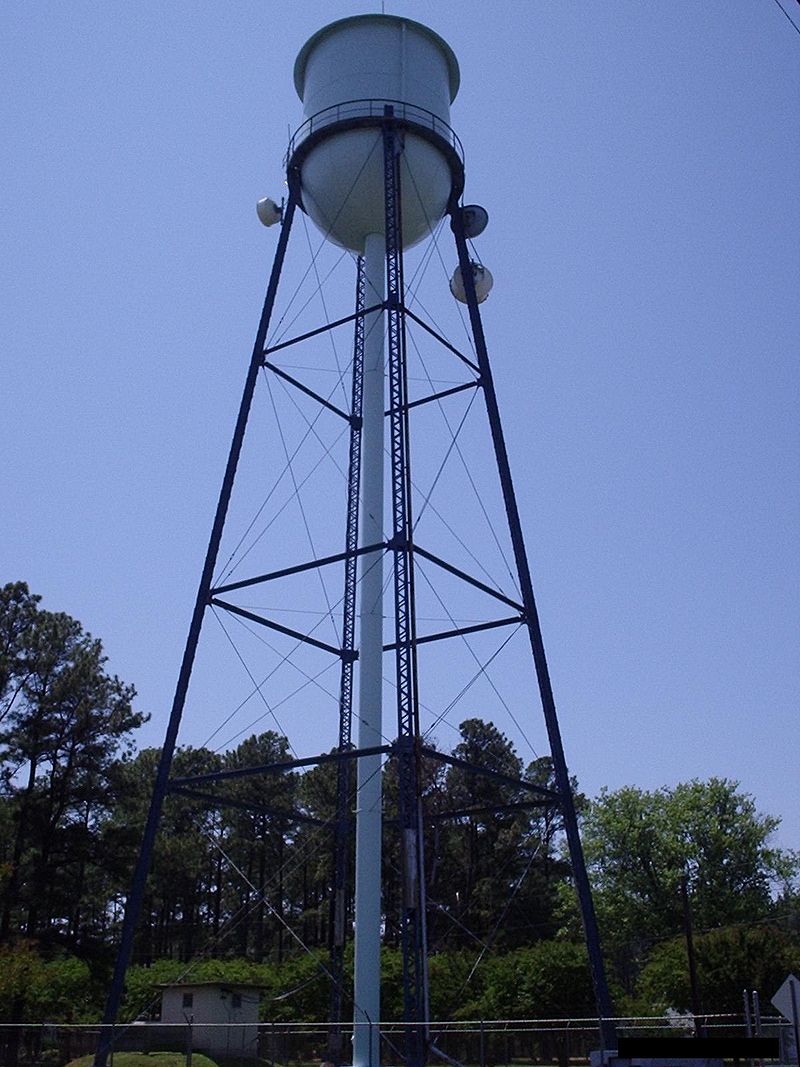 Photo attributed to William Grimes. This work has been released into the public domain by its author. No endorsement by licensor implied.

Newport News Waterworks is a water provider for several cities and counties in the Mid-Atlantic Coastal Plain of Eastern Virginia near the mouth of the Chesapeake Bay. Climate change is projected to cause issues for local water supply and quality. The utility has worked on a number of impacts studies, capital improvement projects, and water conservation outreach efforts to help improve its activities in light of a changing climate.

The City of Newport News owns and operates Waterworks, a regional water utility that services over 400,000 residents in three cities and two counties in the region. Major surface water sources include the Chickahominy River and several reservoirs, including Diascund Creek, Little Creek, Waller Mill, Lee Hall, Skiffe’s Creek, and Harwood’s Mill. Changing precipitation patterns and rising sea levels are issues of concern for water demand, supply, and quality in the region. Changing precipitation patterns are expected to cause both more intense rainfall and more frequent and intense droughts. Increased rainfall will likely increase sedimentation into surface water supplies and may damage water resources infrastructure, while more drought is projected to result in reduced surface and groundwater supplies. Sea level rise is expected to inundate the service area, causing saltwater intrusion into surface and groundwater supplies, as well as exacerbate local land subsidence rates.

Sea Level Rise and Increased Salinity Study
In 2011, the U.S. Geological Survey and the City of Newport News conducted a study to evaluate the impacts of rising sea levels on the salinity of the York and Chickahominy Rivers. Both of these rivers are key tributaries for the Chesapeake Bay and its estuaries, and the Chickahominy River also serves as a major drinking water source for Newport News. The joint study used estuarine models, the Three-Dimensional Hydrodynamic-Eutrophication Model (HEM-3D), and three different sea level rise scenarios (30, 50, and 100 cm) to model how increasing sea levels and freshwater flow volumes influence river salinity concentration gradients. The study found that even with normal flow regimes, sea level rise will likely increase mean salinity concentrations for both rivers, which could be problematic for the intake site that provides 30-70% of the region’s drinking water supply. In addition, the study highlighted how flow regimes moderate river salinity; higher flows effectively minimize river salinity, while low flows exacerbate increasing salinity and allow salt water to travel further upstream into these freshwater systems. For example, salinity concentrations near the Newport News drinking water intake are projected to more than double during dry, low-flow years, which could reduce both the quality and quantity of water available for human consumption and degrade important freshwater habitat.

In addition to its normal operations, Waterworks is also preparing for climate change impacts. For example, in response to projected salinity increases in its intake river (i.e. potential increase in the number of high salinity days from two to over 100 per year), Waterworks rebuilt Walker’s Dam, the saltwater intrusion prevention dam on the Chickahominy River. As a hedge against increased sea levels and larger storm surges and tidal fluctuations, the dam now includes designs for flash fjords, structures that are temporarily raised to increase dam height and prevent saltwater intrusion into the upstream intake site. Waterworks is also rebuilding and refurbishing its other dam structures; although much of this work was mandated due to aged dams and elevated flood risk due to changes in population size and location, Waterworks has capitalized on these mandated updates by choosing to incorporate climate resiliency into refurbishment designs. For example, its refurbished dams are now designed to better withstand 100-year storm events and storms of greater intensity and duration. In addition to operational and structural resiliency, Waterworks also promotes resilient water management through its water conservation and watershed health programs.

Water Conservation and Public Outreach
Although Waterworks has always promoted an ethic of stewardship, it formally started a Conservation program in the 1980s, which has enjoyed extremely high success in reducing regional water use. For example, single-family home water consumption dropped from 195 gallons per day to 134 gallons per day (-31%) between 1997 and 2012, and the largest regional water consumer, Anheuser Busch, has reduced its water use by 50%. Voluntary water conservation has been so successful that Waterworks ended up abandoning a reservoir construction project, as conservation has more than met increasing demand. For example, Waterworks has seen an over 50% reduction in water use, even with a population growth of more than 30,000 people.

In addition to its general conservation outreach via newsletters, social media, regional events, and collaboration with the regional conservation initiative HR GREEN, Waterworks also promotes conservation through residential rain barrel workshops. Via partnership with the Newport News Public Works Department and regional Master Gardeners, Waterworks provides rain barrel workshops where participants can learn about water conservation, Waterworks operations, and get detailed information on rain barrel construction, installation, and use. Workshop participants are given a pre-cut rain barrel that has been refurbished from its previous food transportation role, promoting reuse and recycle themes. Virginia receives abundant rainfall, so the Rain Barrel Workshops are aimed at promoting the use of natural water for outdoor landscaping needs, rather than using treated water that costs both the utility and the customer money.

Waterworks is also in the process of updating how it manages water conservation during drought periods. Waterworks operates on a 4-tier drought restriction program, ranging from voluntary reduction periods to extreme restrictions. During drought periods, Waterworks conducts outreach through newsletters and local partnerships (e.g., garden centers, homeowners associations, etc.) to encourage water use reductions. Waterworks also adds a line item to bills that increases surcharges if people overuse water. For example, customers are currently are allotted a “lifeline” of 600 cubic feet of water per billing cycle. If consumers exceed this water allotment during restricted periods (e.g., during droughts), they are charged a surcharge, which can range anywhere from 15-45% of their typical bill depending on the drought seriousness and the extent to which they overuse. However, water conservation has been so significant across the region that Waterworks is debating lowering this lifeline to 400 cubic feet, which would lower overall water use and further encourage conservation during drought periods to avoid surcharges. In addition, Waterworks is debating making its water conservation exemption process more rigorous (e.g., by requiring documentation of current conservation practices) to ensure that only those businesses and individuals who truly need consistent or above average water use (e.g., for health reasons or maintenance of livelihoods) would be exempt from reducing water usage during drought periods. These discussions will all be incorporated into the current update of the utility’s Water Conservation Management Plan.

From source to tap, Waterworks practices responsible and resilient water management. Its Watershed Health program protects water quality throughout the entire 12,000-acre watershed using land use best management practices, while its Conservation program reduces water overuse and helps customers and consumers appreciate the holistic value of regional water sources. The road to achieving sustainable conservation has not been easy. Waterworks discovered that using only volumetric and monetary incentives to reduce water use resulted in an unsustainable cash flow for the utility; consumers reduced their water use, resulting in less revenue, but operational costs for the utility did not decrease. Waterworks has now stabilized its revenue stream via mainly fixed, rather than volumetric, rates and by promoting the holistic value of water rather than simply its monetary value. A steady cash flow allows for continual and updated conservation programming and provides necessary base funds to explore more sustainable treatment and infrastructure options.

In between source and tap, Waterworks strives to perfect management by investing in sustainable and resilient operational structures and strategies to reduce water vulnerability and maximize availability. Through its various programs, detailed monitoring, and ongoing updates, Waterworks serves as a great example of a resilient and adaptive water utility.

Newport News Waterworks is a regional water provider, owned and operated by the City of Newport News, that serves over 400,000 people in Hampton, Newport News, Poquoson, York County and part of James City County.