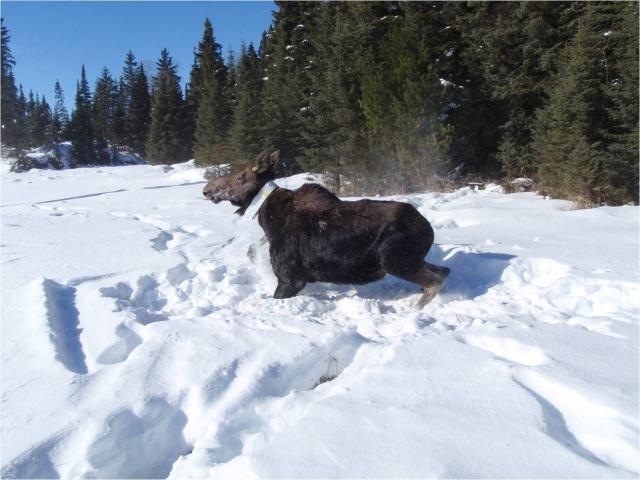 The National Park Service (NPS), along with the University of Minnesota’s Natural Resources Research Institute (NRRI) and the U.S. Geological Survey (USGS), are undertaking a cooperative study to track a small number of moose in Voyageurs National Park, Minnesota using global positioning system (GPS) collars. The collars will provide location data at 15 minute intervals while also recording temperature and activity data every minute. The collar data collected will allow researchers to test hypotheses about moose movement in relation to changes in temperature and weather. Results will give managers a better idea of how moose will respond to warmer temperatures as a result of climate change and allow them to plan for suitable refugia.

In January 2009, an aerial survey of Voyageurs National Park commenced a long-term study funded by the NPS and USGS. The survey was the first completed since 1992 and roughly 45 moose were sighted. The survey is the first phase in a project aimed at gathering information on how climate change will impact moose in Voyageurs National Park. The study will test managers’ hypotheses on how moose will respond to climate change and will gather data to document changes in moose populations and distributions since the 1992 survey.

The study was motivated by the high death rates of moose populations in other areas in Minnesota and a general concern about the impacts of climate change on the species in the southern range of its habitat. Some researchers believe the mortality rates are due to chronic heat stress that moose populations are experiencing because of rising winter and summer temperatures. The next phases of the project will use GPS radio collars to track moose movements and temperature data. The project will rely on monitoring to track the impacts that climate change and temperature changes have on moose populations and distribution. The results of these monitoring efforts will be used to identify forest types that moose use as thermal refugia during periods of elevated temperatures and incorporate those habitats into future restoration and management approaches.

A team from NPS and other cooperators captured 12 moose (ten females and two males) in February 2010 and attached GPS collars to them. Each collar is outfitted with a GPS receiver that records location data every 15 minutes as well as an external temperature sensor that records weather conditions and activity every minute. The collar can also signal when a moose has died to allow researchers to retrieve the animal quickly and determine cause of death, if possible. Collars can store data for 14 months. Moose were recaptured in February 2011 to download data from the collars and replace batteries; an additional six moose were captured and fitted with similar GPS collars in March 2012. The study has gathered data from more than 100,000 locations and will conclude in early 2013.

This differs from other moose telemetry studies occurring in Minnesota in recent years. In addition to being the first project to use GPS collars, the collars used in the Voyageurs’ project include temperature sensors that measure ambient temperature and activity sensors that monitor whether a moose is moving or stationary. This will allow researchers to look at location data as it relates to temperature and activity of moose populations. A similar study was initiated in Grand Portage Indian Reservation, Minnesota, in 2010 and other locations in Minnesota and Ontario in 2011.

Data gathered from the collared moose will be used to test researchers’ hypotheses on how moose habitat use and distribution will be impacted by increased temperatures. The findings will be used to improve habitat management for moose populations in Voyageurs National Park as well as target future research needs for moose in the area.