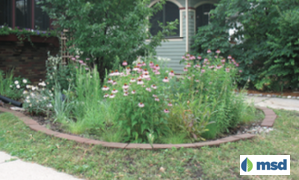 The Louisville and Jefferson County Metropolitan Sewer District (MSD) operates a combined sewer and stormwater system in Louisville, Kentucky. Recurring overflows of this system caused the Environmental Protection Agency (EPA) to issue a consent decree for the MSD in 2005; this decree requires the MSD to invest roughly $850 million to improve the city’s sewer system and mitigate sewer overflows. The MSD developed and adopted the 2009 Integrated Overflow Abatement Plan in order to guide response to the consent decree. As a part of a metro-wide effort to meet stormwater permit requirements and mitigate sewer overflows, the MSD also established a water quality treatment standard in 2013, requiring developments of one acre or greater to mitigate stormwater with green infrastructure. Overall, the MSD’s goal is to implement green infrastructure projects that improve water quality, help reduce stormwater delivery to the combined sewer system, and reduce the demand for and role of gray infrastructure (i.e. conventional infrastructure built of materials such as concrete and steel). This program of work is particularly timely, as the region is experiencing increased flooding as a result of high-intensity rainfall events.

Flooding is of particular concern for the University of Louisville. The university campus experienced severe flooding in 2009, causing over $21 million in damage to 92 different campus buildings. Given current impacts and concern about increasing flood risk associated with climate change, the University of Louisville has partnered with the MSD to implement extensive green infrastructure projects and reduce stormwater delivery to the combined sewer system. The university has received roughly $1.25 million in MSD funds and some university funds to implement a variety of stormwater management projects. These green infrastructure projects are part of a larger university-wide effort to address climate change.

As a part of its Integrated Overflow Abatement Plan, the MSD initially began testing and exploring the effectiveness of green infrastructure in reducing stormwater runoff through 19 different demonstration projects, including installation of permeable alleys and parking lots, rain gardens, and green roofs. Pre- and post-construction sewer flow data were collected and compared for these projects, and the MSD learned many valuable lessons throughout design, construction, and monitoring phases. These lessons learned were combined with a system-wide modeling effort to assess the placement and feasibility of green infrastructure to reduce or replace gray infrastructure basin projects identified in the Integrated Overflow Abatement Plan, eventually leading to on-the-ground projects using green infrastructure techniques at a larger scale and greater density. For example, in the CSO 130 basin, the MSD was able to successfully replace a gray infrastructure basin with green infrastructure solutions, including permeable pavers and tree boxes. These projects captured and stored enough stormwater volume to completely eliminate the need for a combined sewer basin.

As an example of projects implemented using incentives, the MSD partnered on numerous green infrastructure projects on the University of Louisville campus. After severe flooding caused extensive facility damage in 2009, the University of Louisville decided it needed to engage in sustainable stormwater management, including mitigation and adaptation efforts, to help reduce campus flood risk. The university was one of the first groups to partner with the MSD on green infrastructure projects. Installing green infrastructure projects on campus — including underground infiltration chambers, cisterns, and permeable pavers — helped to mitigate flood risk to both the university and the metropolitan area by reducing stormwater delivery to the area’s combined sewers during high rainfall periods.

Stormwater management efforts also tie into the university’s larger climate change advocacy and action items. The university’s climate work started in 2008 when the university president signed the American Colleges and Universities Climate Commitment, which pledges to reduce greenhouse gas (GHG) emissions to net zero and to educate the college community about the significance of climate change. The university formed an institution-wide sustainability council to implement the commitment; the first year was spent documenting university GHG emissions, and the subsequent year was spent creating a Climate Action Plan. Published in 2010, this Plan identifies over 175 different options for reducing university emissions and enhancing adaptation, including components related to stormwater management. For example, the campus master planning chapter suggests minimizing unnecessary hardscape and planting native, deep-rooted tree species to enhance carbon sequestration and help manage stormwater. Similarly, the transportation chapter promotes student use of alterative transportation methods, including biking, walking, and taking public transit. In the absence of using these alternative transportation options, an increasing student population may drive increased demand for parking structures, which often elevate stormwater runoff.

Using lessons learned through partnership projects with the EPA Office of Research and Development, University of Louisville and others, as well as lessons learned from the green infrastructure demonstration projects and the Green Infrastructure Incentives Program, the MSD updated its Green Infrastructure Design Manual. This manual outlines various green infrastructure options, and provides guidance on how users can meet various regulatory requirements using green infrastructure. Contents of this manual were drawn from on-the-ground experience as well as from other regional sources, including resources from the Center of Watershed Protection, MSD’s participation in the 5 Cities Plus group, a collaborative of utility industry executives who meet to share ideas and best practices for compliance with federal laws and regulations, and MSD’s participation in regional stormwater conferences.

Louisville MSD also adopted updates to the Wastewater/Stormwater Discharge Regulations effective in 2013, which enabled creation of a Fee in Lieu program for land parcels and development projects where installing green infrastructure is not feasible. Options for program qualification and implementation are currently being reviewed and considered by the MSD, including infiltration capacity, presence of sinkholes or karsts, or other factors that could limit green infrastructure effectiveness or feasibility.

Louisville MSD and partners have successfully implemented a number of green infrastructure projects within Jefferson County since the EPA Consent Decree in 2005 (amended in 2009) and 2009 Integrated Overflow Abatement Plan. On the University of Louisville campus, numerous green infrastructure features have been installed since 2010, including underground filtration systems, green roofs, permeable pavers, rain barrels, and stormwater collection cisterns. The university has also actively been disconnecting downspouts and parking lots and driveways from the sewer system. The university’s green infrastructure system currently diverts about 75 million gallons of stormwater per year, and helped minimize flooding during a recent severe storm in 2012. In addition, since publication of its Climate Action Plan, the university has reduced its GHG emissions 27%.

The MSD’s Green Infrastructure Incentives Program is now transitioning its focus to target drainage areas with the highest overflow risks. The MSD are also working with a variety of partners to monitor flow and water quality in basins with implemented projects to better understand the quantitative impact of green infrastructure in reducing stormwater delivery to the combined sewer system and regional rivers and streams. In addition, since original publication, the Green Infrastructure Design manual has undergone updates and revisions to reflect changes in MSD rules and regulations. For example, the manual was revised in 2013 to reflect and provide guidance on meeting the MS4 Stormwater Permit requirements. MSD requires new and redevelopment projects of one acre or greater to capture and treat the first 6/10 of an inch of rainfall with green infrastructure. This manual is publically available online, and the MSD has recently expanded its website to increase communication about green infrastructure benefits with the public.

Moving into the future, Louisville MSD hopes to use monitoring information and emerging information from academic research and regional projects to continually revise its Green Infrastructure Design Manual. MSD is also engaged in projects to minimize flood risk, including buyouts of flood-prone buildings, and upgrading floodwater storage basins to accommodate higher flows and then gradually release them as water levels recede.

The University of Louisville is also hoping to increase monitoring of its green infrastructure projects, as well expand education, outreach, and visibility of these projects. Many of the implemented green infrastructure projects are not visible (e.g., underground infiltration basins). By enhancing the visibility of these and new projects in the future, the university hopes to promote the integration of sustainability actions more thoroughly across all campus facilities and communities, and to use these sustainability successes for university marketing and fundraising. Alongside its stormwater adaptation work, the university also hopes to reach emission neutrality by 2050.

MSD protects our community’s overall health and safety by providing clean waterways and by managing flood and drainage issues—24 hours a day, 365 days a year.

This is the job of about 600 MSD employees across the 376 square miles of the Louisville Metro* area. While we operate and maintain Louisville Metro’s sewer and floodwall systems, water quality treatment centers and flood pumping stations, MSD also invests in hundreds of infrastructure improvement projects each year and plants more than 1,000 trees and other plants to enhance water filtration and reduce runoff.