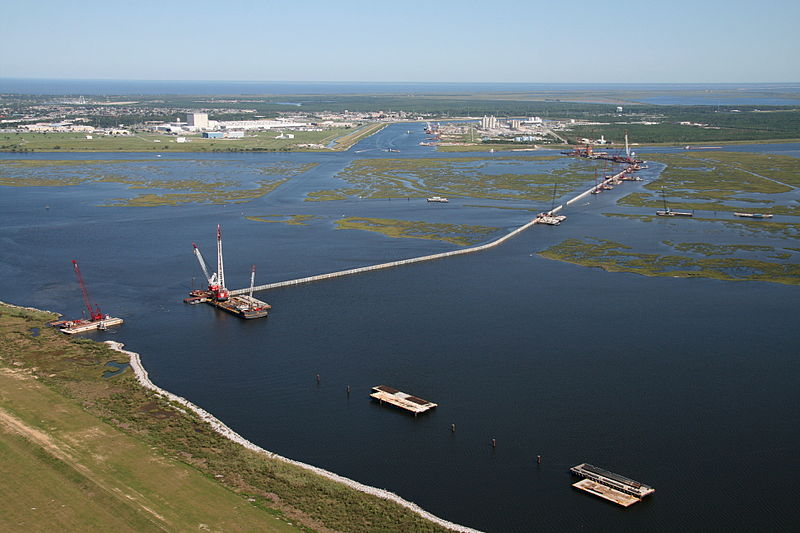 The Inner Harbor Navigation Canal Lake Borgne Surge Barrier, the largest civil engineering project in the history of the U.S. Army Corps of Engineers, was designed to reduce storm surge and flood risk for New Orleans after devastating flooding during Hurricane Katrina. The 26-foot-high, 10,000-foot-long storm surge barrier minimizes 100-year flood risk, and features three navigational gates that can be raised in anticipation of storm surge. One of these gates, designed by TetraTech, is also buoyant, which extends the lifespan of the structure by allowing it to adjust to storm surge changes associated with sea level rise.

During Hurricane Katrina, southeastern Louisiana experienced an 18-foot storm surge that overpowered floodwall and levee structures along the Mississippi River Gulf Outlet and Gulf Intercoastal Waterway, leading to floodwaters 15 feet deep inundating many neighborhoods in and surrounding New Orleans. Post-Katrina, the state and nation recognized the need for enhanced storm surge and flood protection for this area, particularly as climate change may exacerbate these risks. The confluence of the Gulf Intercoastal Waterway and Mississippi River Gulf Outlet was identified as an area of enhanced vulnerability; storm surge passes through this natural funnel in the coastline, ushering water inland towards the New Orleans inner harbor and municipal area. In 2006, Congress authorized the U.S. Army Corps of Engineers (USACE) to design and implement the Inner Harbor Navigation Canal Lake Borgne Surge Barrier. The USACE was tasked with designing this storm damage risk reduction system to achieve 100-year risk reduction for the region (i.e., to protect against a storm surge that has a 1% chance of occurring in any given year). Specifically, the barrier was to be placed near the confluence of the Gulf Intracoastal Waterway and the Mississippi River Gulf Outlet to protect the New Orleans area from storm surge originating from the Gulf of Mexico, Lake Borgne, and Lake Pontchartrain. The barrier also needed to maintain navigational passage.

Funding for the barrier came from the American Recovery and Reinvestment Act of 2009, and total cost for the project was close to $1.1 billion. The USACE granted a construction contract to Shaw Environmental and Infrastructure, Inc. in 2008, and TetraTech was hired as a subcontractor, along with Ben C. Geriwick, Inc., to lead the storm barrier design, as well as for their engineering services during construction.

TetraTech led the design of the Inner Harbor Navigation Canal Lake Borgne Surge Barrier. Initial project design considered navigational needs and hydrological realities of the area, resulting in a final design that features a massive floodwall with three gates that permit navigational passage. These gates can be raised in response to storm surge, helping minimize flood risk while maintaining navigational opportunities. Gates include a 150-foot-wide sector gate across the Gulf Intracoastal Waterway, which is responsible for protecting New Orleans from Gulf of Mexico storm surge; a 56-foot-wide lift gate at Bayou Bienvenue that supports a vehicular bridge, and which protects against storm surge from Lake Borgne; and the Seabrook floodgate that protects against storm surge entering the Inner Harbor Canal from Lake Pontchartrain.

The final barrier was designed to meet a 50-year life span under “current conditions.” Sea level rise and storm surge projections associated with climate change were also referenced during the design process. Halfway through the design phase, an engineering review was completed, and several project components were adjusted to maximize barrier effectiveness, minimize construction costs, and reduce long-term maintenance requirements. Most notably, the sector gate spanning the Gulf Intracoastal Waterway was changed from a fixed gate to a buoyant gate by replacing the support wheels with buoyancy tanks. Minor adjustments were also made to Bayou Bienvenue lift gate.

Construction began in May 2009, and project contractors were tasked with reducing flood risk to surrounding communities by 2011. This aggressive timeline required design and construction to occur simultaneously, a unique reality for such a large infrastructure project.

The Inner Harbor Navigation Canal Lake Borgne Surge Barrier is the largest civil works project in U.S. Army Corps of Engineers history. The final structure, completed in 2013, is a 10,000-foot-long and 26-foot-high concrete wall that provides complete closure of the Mississippi-Gulf Outlet. It features three navigational/storm surge gates, including the buoyant gate designed by TetraTech. This innovative buoyant gate adds an extra layer of resiliency to the surge barrier project, as it can rise in response to increasing sea level, thereby protecting against higher storm surge that may occur as sea levels rise. By accommodating changing conditions, the buoyant gate slightly extends the life of the structure beyond the 50-year design mandate. In addition, this novel design minimizes maintenance requirements and reduces overall operational stress on the structure.

Construction of this surge barrier effectively reduced 100-year flood risk for the surrounding communities, and the buoyant gate enhances the project’s resilience in the face of climate change. The surge barrier also relocated the focal point of flood protection infrastructure away from the city center of New Orleans, eliminating the need to raise 30 miles of existing flood-protection infrastructure, including levees and floodwalls. Although construction was not completed until 2013, the Inner Harbor Navigation Canal Lake Borgne Surge Barrier helped protect New Orleans from storm surge flooding associated with Hurricane Isaac in 2012. The full effectiveness of this barrier in reducing storm-surge associated flood risk will be tested during the next major hurricane.

One of the most significant challenges encountered in this project was the unique and complex hydrological and ecological nature of the Delta region. Saltwater and freshwater flooding are both major issues for New Orleans, making comprehensive flood risk reduction difficult. While the storm surge barrier will help enhance saltwater flood resilience stemming from the Gulf and regional bayous, a pumping system upgrade project, which was designed and constructed independently, will work alongside the storm surge barrier to help minimize freshwater flooding in the city.