Integrating Climate Change into the Planning and Operations of the Apostle Islands National Lakeshore, Wisconsin 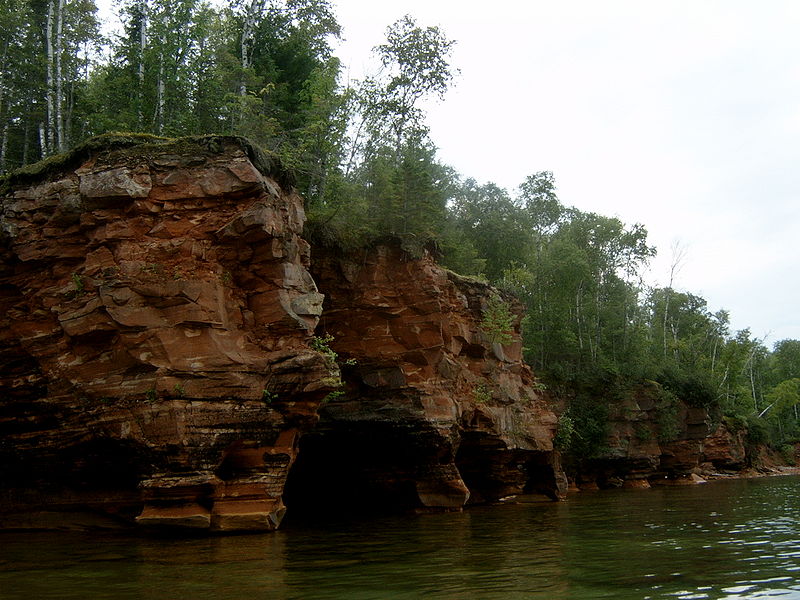 The Apostle Islands National Lakeshore (APIS) in Wisconsin is integrating climate change in its planning and operations. APIS became a member of the National Park Service’s Climate Friendly Parks program in March 2008 and is incorporating the overall National Park Service Climate Change Response Strategy into sustainability efforts on site. In addition, climate change was included in the 2011 APIS General Management Plan (GMP), which acts as a guide for park managers to use in decision making about resource protection, visitor experience and education, and facility development within the park’s boundaries. The climate change component of the plan calls for park staff to use an adaptive management approach in addressing climate change on park lands and to engage in scientific studies and inventories to support decision making. APIS has also expanded its educational efforts on climate change and made infrastructure improvements in response to lower lake levels.

APIS is located on the northernmost point of the Bayfield Peninsula in Wisconsin. The park includes over 42,000 acres of land on twelve miles of mainland shoreline and 21 islands, plus approximately 27,000 acres of surrounding  Lake Superior waters (NPS 2011). The major climate impacts of concern for the park are increasing air and water temperatures and changes in precipitation patterns and extremes, which are projected to cause lower lake levels and decreased winter ice. Some of these changes, such as increasing temperatures and reduced ice cover, have already been documented in the park.

Under the leadership of Superintendent Bob Krumenaker, APIS has incorporated climate change into its operations and broader sustainability efforts. In 2008, APIS joined the Climate Friendly Parks system, created by the National Park Service to provide parks with the resources needed to respond to climate change. The requirements for being a Climate Friendly Park include conducting an emissions inventory, creating a reduction strategy, developing an Action Plan, and increasing education and outreach on climate change issues. The Apostle Islands National Lakeshore Action Plan includes metrics to achieve these goals; the park has made a number of strides in its reduction strategy, including increasing the use of biodiesel and running many facilities within the park’s property on solar power. In addition, APIS has incorporated climate change into its GMP, expanded its educational and interpretive efforts to emphasize climate change, and made infrastructure improvements where possible.

The APIS GMP is intended to guide natural and cultural resource management in the park for the next 15-20 years. This process began in 2005 and was completed in 2011. Climate change was not one of the initial focus areas but with the direction of Superintendent Krumenaker, it was incorporated as an important regulatory and management issue for the park’s natural and cultural resources, facilities, and visitors. The plan includes desired conditions (e.g., APIS is a carbon neutral park that promotes climate change awareness and education and incorporates adaptation into its operations) and strategies to achieve those conditions (e.g., reducing greenhouse gas emissions, increasing educational efforts and interpretive exhibits, conducting scientific and monitoring studies, engaging in scenario planning efforts). It is not a prescriptive plan for how to respond to climate change but the inclusion of climate change as a major issue affecting the park supports the justification to study and reduce the extent of impacts where possible, and enhances the development of a climate-informed management perspective.

APIS has made strides in expanding its educational and interpretive efforts with regards to climate change. The Northern Great Lakes Visitor Center Climate Change Exhibit was designed with the support of the National Park Service, U.S. Forest Service, the University of Wisconsin, and the Great Lakes Indian Fish and Wildlife Commission. The “Changing Climate, Changing Culture” exhibit includes the effects of climate change on the native Ojibwe culture and other residents in the region. In addition, APIS and its partners received a grant through the 2012 Parks Climate Change Program to take the messages from the exhibit and transform and apply them into a local curriculum for school teachers.

APIS has also made changes to infrastructure on site in response to some of the more noticeable effects of a changing climate, such as lower lake levels. Lake Superior experienced record low levels in 2007. As lake levels declined, the park lost between 25-50% of its functional dock space; shallower water exposed the docks’ beams, leaving the docks high above the water line and putting boaters and their boats at risk. Park staff had to weigh the costs and benefits of infrastructure retrofitting to meet the needs of boaters while also finding a cost-effective, sustainable approach; these decisions were complicated by the uncertainty in many models around how climate change will drive lake level changes in the region. With the support of a $12,000 grant from Friends of the Apostle Islands National Lakeshore, park management decided to lower the surface level of some docks by six to twelve inches and install vertical rails to protect boats from being trapped underneath. These docks are not flexible or adjustable in any way, but the vertical rails support a wider flexibility of conditions (e.g., boats can bump against the rails rather than getting swept under the dock and the rails provide boaters with a stable structure on which to tie their boats). The park also competed successfully for NPS infrastructure funding to completely replace three old  park docks, and built each one with a lower surface than what it replaced.

APIS has taken advantage of opportunities to become a climate-smart park in its planning, operational, and educational efforts. Through all of its activities, APIS has benefited from strong partnerships, especially within the northern Wisconsin sustainability community, and from strong leadership. Superintendent Krumenaker is the lead of an formal regional climate change task force, which developed in 2012 a Midwest regional strategy based upon the four tenets of the National Park Service’s Climate Change Response Strategy – Science, Mitigation, Education, and Adaptation.

Information gathered from interview with project contact on May 16, 2012, publications, and other resources.. Case study reviewed by project contact.

Set in a matrix of Lake Superior, the largest and most pristine of the Great Lakes, the Apostle Islands archipelago includes 22 islands and is located in far northwestern Wisconsin, off the Bayfield Peninsula. Twenty-one of these islands, and a 12-mile segment along the shore of Wisconsin’s north coast, comprise the Apostle Islands National Lakeshore.