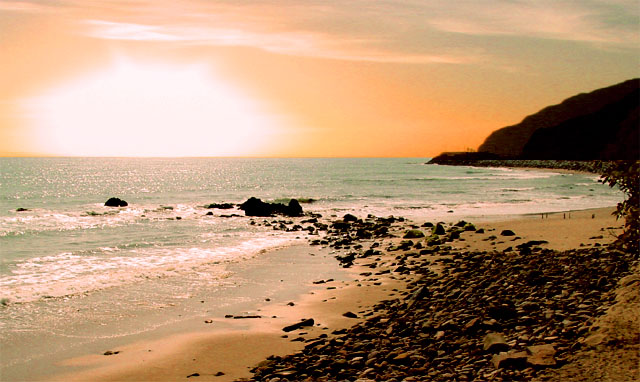 This image has been released into the public domain.

Malibu’s 21 miles of coastline include some of the world’s most famous beaches and highly valued coastal property. Sea level rise poses an enormous threat to the sandy beaches of Malibu as well as to the multi-million dollar homes lining the coast. The Malibu Local Coastal Program’s Land Use and Local Implementation Plans aim to ensure the Coastal Act is upheld and the city’s General Plan and other development and planning ordinances comply with the California Coastal Act. The plans outline policies to mitigate and reduce the hazards that climate change impacts such as flooding, erosion, sea level rise, and intense coastal storms pose to the city’s coastal resources and built environment.

The City of Malibu is entirely within the State of California’s designated Coastal Zone area. The city’s sandy beaches, coastal bluffs, and rocky headlands are at serious risk from sea level rise, coastal flooding, erosion, and increasingly intense coastal storms, all of which could greatly affect Malibu’s beach culture, tourism, and shoreline infrastructure.

The California Coastal Act of 1976 requires any local government with land in the designated Coastal Zone to have a Local Coastal Program (LCP). The LCP is charged with developing a Land Use Plan and Local Implementation Plan that aim to ensure all local land use plans, zoning ordinances, and zoning district maps are in compliance with the Coastal Act’s goals and policies. The plans must be approved by the California Coastal Commission but are implemented by the local government once approved.

To ensure the city management plans and zoning are in compliance with the Coastal Act, the LCP plans must include future conditions and hazards in city planning, zoning, and policies. Every project submitted to the planning commission, including those the city undertakes, must conform to the LCP.

Malibu’s LCP is run by the city’s Planning Division, which wrote both the Land Use and Local Implementation plans. The plans were submitted and adopted by the California Coastal Commission in 2002, and relied on vulnerability assessments previously conducted by the state and the Coastal Commission.

Climate change impacts and hazard concerns are addressed in Chapter Four – Hazard & Shoreline/Bluff Development as well as in Chapter Five – New Development. Both chapters consider sea level rise, erosion, coastal storms, and flooding impacts. To mitigate and prepare for the current and future hazards on coastal resources and development, the following are required:

The land use policies outlined in the Land Use and Local Implementation plans help prepare the city for the impacts of climate change by encouraging setbacks, low impact development along shorelines, and removal of shoreline hardening where possible.

The policies included in the plans ensure that all development in the City of Malibu consider the current and future impacts of sea level rise, erosion, and coastal storms and help mitigate the threat of climate change impacts on the city’s coastal resources and infrastructure. Numerous amendments have been made to the LCP, including updates to public access maps, municipal codes, and development standards. Some of these amendments are still pending certification from the California Coastal Commission Certification. In fall 2019, the city launched a coastal vulnerability assessment, but COVID-19 has delayed the workshops that were intended to be held in 2020 to solicit public input.

Malibu is a unique land and marine environment and residential community whose citizens have historically evidenced a commitment to sacrifice urban and suburban conveniences in order to protect that environment and lifestyle, and to preserve unaltered natural resources and rural characteristics. The people of Malibu are a responsible custodian of the area's natural resources for present and future generations.