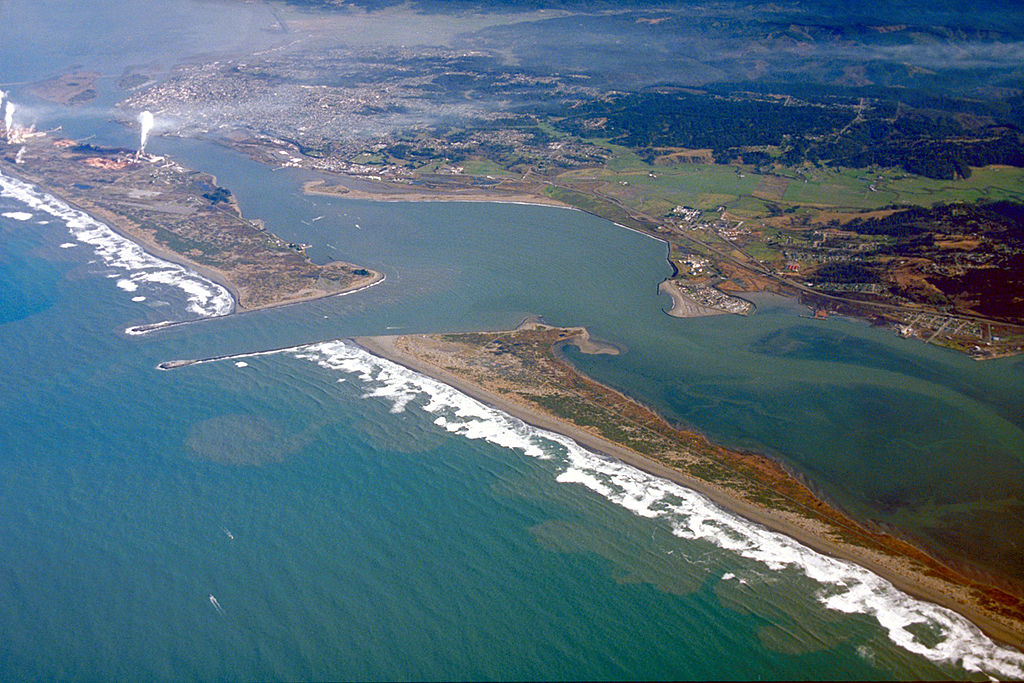 The Northcoast Regional Land Trust (NCRLT) has worked to restore historical tidal flow and native vegetation to the Wood Creek Tidal Marsh. Over the past 150 years, this site has been altered by diking and removal of vegetation and large woody debris. Despite these alterations, surveys have shown that endangered and threatened fish species utilize this area for rearing. The Wood Creek Tidal Marsh Enhancement Project’s primary climate change benefit comes in the form of flood mitigation for the lower Wood Creek/Freshwater Creek area. Anticipated increases in winter precipitation will likely bring increased flooding to the local watersheds. The reconnection of Wood Creek to Freshwater Creek through the opening and removal of the tide gate and the creation of a more complex wetland channel system is helping to reduce the velocity and shear potential of flows.

The NCRLT owns and manages the 74-acre Freshwater Farms Reserve located on diked former tidelands along Humboldt Bay. This property is found in an area historically dominated by salt marsh but which has been converted into drier land for agriculture through diking and simplification of the slough systems. The project site itself was cut off from the greater Freshwater Slough system by a wooden flap tide gate and a levee, preventing tidal influence on the property. This site has been greatly altered over the past 150 years by diking, vegetation removal, and removal of large woody debris but still provides important habitat for juvenile salmonids. Surveys showed that endangered and threatened fish species, including coho salmon (Oncorhynchus kisutch) and steelhead (Oncorhynchus mykiss) and coastal cutthroat trout (Oncorhynchus clarkii clarkii), have still been using this area for rearing prior to their migration to the ocean. Additionally, the endangered tidewater goby (Eucyclogobius newberyyi) was discovered on the site. It was determined that expansion and enhancement of this habitat would be beneficial to these species and contribute to their recovery. In 2006, NCRLT, in partnership with the Redwood Community Action Agency Natural Resource Services Division, initiated the development of this habitat restoration project.

As lands are converted to salt marsh, there is an element of flexibility within and just outside the project area in regard to wetland plant community migration that may come with changes in the tidal levels and corresponding salinities and inundation rates at different elevations. While the plant species at the site are currently made up of a mix of salt-tolerant and freshwater wetland plants, the less salt-tolerant plant species may move up in elevation and back out of the lower project area, near the confluence of Wood Creek and Freshwater Creek, as sea level rise results in increased salinity and inundation of the lower elevations within the project area. The configuration of the project area and the adjacent wetland pasture area allows for this natural migration to occur without significantly affecting the objectives of the restoration project or the mixed agricultural land use on the 74-acre NCRLT property.

The primary management objective for the property is to restore approximately 35 acres to its ancient tidal hydrology and create estuarine conditions on approximately 15 acres. The construction phase of the restoration project began on August 25, 2009, and took two and a half weeks to complete. Fish screens were installed and California Department of Fish and Game biologists manually removed all fish from the project area prior to any construction. Four slough networks of varying complexity and totaling about 3,700 feet in length were excavated in the historic marsh plain.

Two existing seasonal ponds were also excavated to provide year-round habitat for tidewater goby. It is hoped that tidewater goby known to inhabit the existing pond south of the Wood Creek tide gate will migrate through the new slough system and utilize these newly-excavated brackish water pools. A large pool was also excavated upstream of the crossing on Wood Creek in order to expand the freshwater habitat in which numerous young salmon have been observed. An existing dike on the north bank of Wood Creek (approximately 300 feet long) was removed to allow unimpeded tidal flow on the lower Wood Creek marsh plain.

The soil created from all of the excavation work was used on-site to construct shallow hills (hummocks) on the marsh plain. The hummocks were designed and constructed to only rise in elevation to where brackish wetland characteristics (e.g., frequent tidal inundation, specific plant communities) exist. Three redwood root wads were installed in the banks of the slough channels, while one root wad was placed in the large upstream freshwater pond. Five additional root wads were placed across the marsh plain within the project area to provide perches for the numerous raptors and wetland birds found in the area. Hand seeding with sterile erosion-control grass seed was done after construction to protect newly-constructed and unvegetated hummocks from tidal and raindrop erosion during the winter.

Two hummocks remain unvegetated and will act as controls to help the project team determine the extent and profile of passive wetland plant colonization over time. The test hummocks will be surveyed annually and will be controlled for invasive plant species, which will be manually removed when observed.

The existing wooden flap tide gate at the mouth of Wood Creek was opened with a come-along in October 2009, allowing full access to the project site for fish, crustaceans, and other aquatic species, as well as the tides that bring these animals into the area. The tide gate has since been removed and NCRLT agency partners use the concrete infrastructure where it was housed to monitor the success of the project’s restoration efforts.

The revegetation phase for this project began in April 2010, and was completed on June 19, 2010. About 46,000 native wetland-associated plants were planted across the constructed tidal hummocks and along the margins of the new slough channels. The revegetation plan was developed to mirror natural conditions at neighboring Fay Slough.

After five years of monitoring, NCRLT initiated a second phase of the project. This phase focused on creating freshwater channel habitat in a 20-acre site acquired in 2012. Phase two began in August 2016 and was completed in four weeks. Project staff cut and graded channels in the wetland site, raised the hummocks, installed about 100 cubic yards of wood structure, and seeded the pasture area with native riparian species. In 2017, NCRLT installed an additional 25 wood structures to the channels to enhance instream habitat for juvenile salmon, increasing habitat connectivity and complexity as well as providing space for wetland species migration.

Partners and funders of the project included the U.S. Fish and Wildlife Service (Coastal Program and National Coastal Wetlands Grant Program), The Nature Conservancy, National Oceanic and Atmospheric Administration, California Department of Fish and Wildlife, National Fish and Wildlife Foundation; Pacific Gas and Electric, California Conservation Corps, and the Humboldt Redwood Company. NCRLT and partners continue to monitor how these restoration efforts are affecting local conditions. For example, in the 2016–2017 winter monitoring season, over 500 coho salmon were detected, and data collected indicate that the project area supports the second-fastest growth rate for juvenile salmon of all Humboldt Bay tributaries. NCRLT has also engaged the local community in restoration efforts through their education and outreach program “Building Community for Conservation.” This program includes interpretive hikes, K-12 education programs, canoe trips, and restoration activity days at the site.

The Northcoast Regional Land Trust (NRLT) was formed in 2000 by a diverse group of people with backgrounds in land use planning, ranching , farming, fisheries, forestry and others concerned with protecting the North Coast’s environment and quality of life.  Congestion in other urban areas of California has contributed to a steep climb in the real estate value of agricultural lands and other natural areas, catalyzing their conversion to residential development.  The NRLT works with conservationists, ranchers, farmers, timberland managers, natural resource scientists, environmental advocates,

The Land Trust Alliance promotes voluntary private land conservation to benefit communities and natural systems.  We are the national convener, strategist and representative of more than 1,600 land trusts across America.