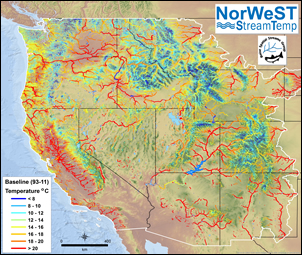 Increasingly, managers are being asked to consider the impacts climate change may pose to a species or a specific area. However, most climate-related models and/or forecasts do not provide sufficient resolution to know where within individual landscapes that management could help ecosystems adapt to climate change. The goal of the NorWeST project is to organize large amounts of existing stream temperature data collected by dozens of resource agencies and use these data to create high-resolution models and maps of historical, current, and future stream temperatures across the Northwest United States. Managers are using this information to prioritize restoration and conservation efforts and improve the efficiency of new stream temperature monitoring.

Temperature plays a fundamental role during many stages of a fish’s life history; it can regulate spawning, incubation, and migration timing and growth (Isaak et al. 2012). Other stream biotas are also vulnerable to stream temperature alterations because most have ectothermic physiologies and temperature-dependent growth and survival. Climate change-driven air temperature increases have been warming stream temperatures in recent decades, particularly free-flowing, unregulated streams where air temperature trends account for 82-94% of the warming signal (Isaak et al. 2012). Isotherms are lines of constant or equal temperature used to track the locations of thermal habitats in streams. During the 20th century, stream isotherms shifted 1.5-43 km upstream as air temperatures increased by 0.6oC and these isotherms could shift another 5-143 km by the mid-21st century if most climate change projections are accurate (Isaak and Rieman 2013). Aquatic organisms will have to shift with these moving isotherms or risk local extirpation.

Every stream provides a unique reflection of the various terrains and the landscapes it flows through, making it impossible for low-resolution climate models to provide the detail that managers need to prioritize conservation efforts. Stream temperature, however, is relatively easy to directly measure using miniature, inexpensive temperature sensors and monitoring efforts by state, federal, tribal, and private interests over the last 20 years have created massive amounts of data in the many areas. Until recently, these efforts have been largely uncoordinated so stream temperature data were fragmented and underutilized. NorWeST (i.e., Northwest Stream Temperature), a project started in 2011 and funded by the U.S. Fish & Wildlife Service’s Great Northern and North Pacific Landscape Conservation Cooperatives, is organizing these data into one comprehensive database. These data are then used to create high-resolution stream temperature scenario maps and are made available as user-friendly geospatial data through a project website. Creating accurate climate scenarios developed from data collected by the managers working within individual landscapes empowers them to make better local decisions about climate adaptation and creates a stronger social network of practitioners across agency jurisdictions.

NorWeST is an interagency stream temperature database that covers Oregon, Washington, Idaho, western Montana, most of Wyoming, and parts of northern Colorado, Utah, and Nevada. When it is complete, it will contain digitized copies of temperature data from >15,000 stream sites and >45 million hourly temperature records contributed by more than 60 resource agencies and hundreds of individual biologists and hydrologists. Together this dataset is one of the largest spatial and longest temporal stream temperature datasets available in the world from which to assess historical and current high-resolution temperature trends.

All the stream temperature data from project contributors are made available on the NorWeST website after passing through rigorous quality assurance procedures. These data are also used to calibrate spatially explicit statistical stream models that then forecast predicted stream temperatures under differing climate scenarios. Details of the quality control and modeling procedures are available online. Data from a stream temperature monitoring site can be used in the models if it has accurate spatial coordinates and multiple temperature recordings for 90% of the days in August. The models are run using the free software STARS ArcGIS toolset and the SSN package for R statistical software. Historical scenarios representing individual years are available as are future scenarios representing the A1B and A2 IPCC emission scenarios for mid- (2040) and late-century (2080).

Temperature data and model outputs are posted after quality control and assurance is completed. Completed modeled stream temperature scenario maps are available online (see Isaak et al. 2010 for examples). The stream temperature scenario maps have a 1-kilometer resolution. As of January 2014, Idaho, western Montana, and parts of eastern Washington and Oregon are complete. The remaining region is expected to be complete by the end of 2014.

The success of this program has been dependent upon collaborations with many federal, state, and local agencies and their willingness to share data. To keep partners engaged in the process, workshops are periodically conducted to engage local practitioners in ways of using the new stream climate information with a complimentary set of decision-making tools, regular project updates are emailed to the data contributors regarding use of their data, and a climate-aquatics blog is maintained to discuss emerging science and various aspect of how climate change is affecting stream ecosystems. A burgeoning social network is growing out of the concerns for these ecosystems that NorWeST is helping to catalyze. Additional details regarding the NorWeST project are contained in this feature on the Great Northern LCC website and on the project page.

If you are interested in receiving technical assistance to create annual temperature monitoring stations in the region to support NorWeST, project scientists have put together the following protocols. To view annual stream temperature sites across the United States and locate others monitoring temperatures in your river basin, please visit the Full-Year Stream Temperature Monitoring Sites map.

The Rocky Mountain Research Station (RMRS) is one of seven regional units that make up the USDA Forest Service Research and Development organization—the most extensive natural resources research organization in the world. We maintain 12 field laboratories throughout a 12-state territory encompassing the Great Basin, Southwest, Rocky Mountains and parts of the Great Plains (see map). Our research program serves the Forest Service as well as other federal and state agencies, international organizations, Tribes, academia, non-profit groups and individuals. 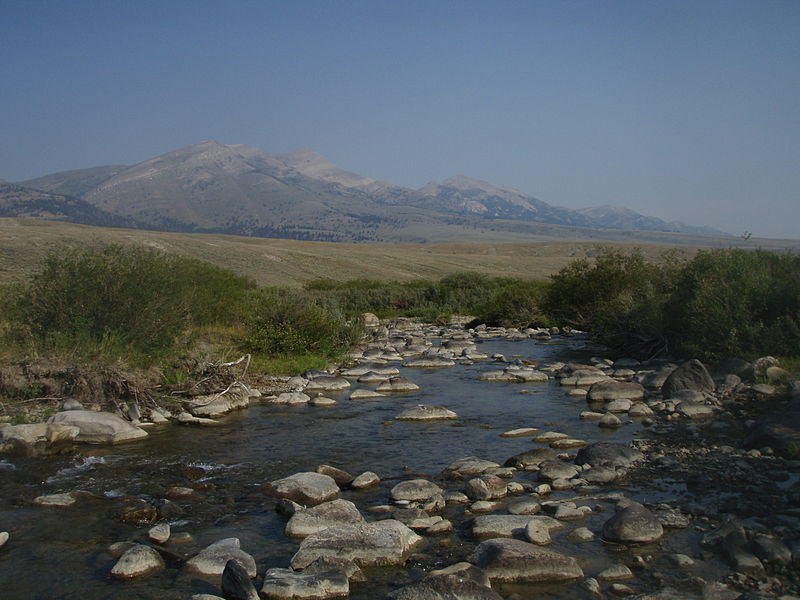