In 2010, the Federal Highway Administration (FHWA) selected five pilot teams from across the country to test a climate change vulnerability assessment model. This conceptual model guided transportation agencies through the process of collecting and integrating climate and asset data in order to identify critical vulnerabilities. During this year-long pilot program, the pilot teams formed a community of practice, exchanged ideas, presented draft results, and participated in a series of webinars and peer exchanges. FHWA used the feedback and lessons learned from the pilot projects to revise the draft conceptual model into the Climate Change & Extreme Weather Vulnerability Assessment Framework. The framework is available on the FHWA website. This case study is focused on Oahu, Hawaii.

The Oahu Metropolitan Planning Organization (OahuMPO) coordinates transportation planning for the island of Oahu. A key priority of the MPO is ensuring the resilience of this remote Hawaiian island's roads, airports, and harbors to existing and anticipated climate changes. As one of the 2010-11 pilots, OahuMPO facilitated a workshop designed to identify and prioritize transportation assets that may be vulnerable to climate impacts. The study focused on five high-priority sites with existing vulnerability to extreme weather and climate variability. Given the need for this type of analysis throughout the Pacific, where funding resources are scarce, OahuMPO developed a highly efficient "triage" approach that could be replicable both within the state and across the Pacific island nations.

OahuMPO coordinates closely with Departments from the City and County of Honolulu and the State of Hawaii to meet the transportation planning needs for the entire island of Oahu. The pilot focused on five critically important asset groups on Oahu, including the Honolulu Harbor Area and the Honolulu International Airport.

In March of 2011, OahuMPO invited over 60 planning, engineering, and management professionals and students from the City and County of Honolulu, the State of Hawaii, FHWA, the University of Hawaii, private industry, and other Pacific Island nations to participate in a climate change vulnerability assessment workshop. Local climate scientists presented information on observed and projected climate change impacts. Native Hawaiian cultural practitioners informed the discussions on the social and cultural impacts of climate change. Prior to the workshop, the project team distributed a short pre-workshop preparation handout that asked participants to consider the impacts of climate change on transportation assets.

Prepare for climate vulnerability workshop. Prior to the workshop in March 2011, OahuMPO consulted climate scientists from the University of Hawaii and the National Oceanographic and Atmospheric Administration (NOAA) to develop a baseline understanding of the current climate change impacts affecting the Pacific islands. These discussions identified the key climate impacts of concern to be sea level rise and shoreline erosion, changes in rainfall patterns, increases in storm surge intensity, and changes in cloud formation. OahuMPO also consulted with lead planners and engineers to gather knowledge on Oahu's highways, harbors, and airports.

Identify and prioritize vulnerable assets. The project team held a two-day workshop to develop a short list of critical transportation assets that were likely to be vulnerable to climate impacts. During the workshop, participants identified and prioritized vulnerable asset groups through an iterative process that relied heavily on local knowledge. A series of facilitated discussions helped participants evaluate the economic and social consequences of asset failure to due climate change. Based on the consensus from these discussions, the participants identified a small number of highly critical assets:

Define climate scenarios. In preparation for the risk assessment, the project team gathered historical climate information from 1970‐2007 and projections for 2050 and 2100 at the local and regional levels. The climate hazards of interest were sea level rise, storm surge, strong winds, intense rainfall, and extreme temperatures. The team assumed a "worst case" storm scenario, or a Category 4 hurricane. However, they assumed a "best case" sea level rise scenario of three feet by 2100 because Hawaii, unlike other coastal areas across the Pacific Ocean, has not experienced additional upwelling of water during El Niño climate events in the past. For both storm surge and sea level rise, the team developed LiDAR‐based inundation maps to illustrate the anticipated flooding due to sea level rise and storm surge.

Rank level of vulnerability and impact. In order to assess the risk that climate change poses to each of the five selected assets, the project team held two work group sessions. In the first session, the participants scored each transportation asset as either "high," "medium," or "low" on level of vulnerability and level of structural impact in both 2050 and 2100. The project team then evaluated the likelihood of future climate changes and the magnitude of future climate changes.

Rank consequence to society. In the second working group session, participants examined the social and economic consequences of asset disruption or failure. Since the project did not have the resources to conduct a quantitative analysis of costs and benefits, it considered qualitative factors such as level and type of use, degree of redundancy, cost to replace, and cultural value.

Assess integrated risk. The team used a three-tier ranking system to classify asset risk for the two planning horizons years of 2050 and 2100 (see Figure 2). The three categories for ranking integrated risk were:

The study assigned an integrated risk score to each of the five asset groups by combining the individual scores for vulnerability, impact, and consequence to society. There was no simple formula for aggregating the individual scores into the final risk score. For example, both the vulnerability and impact rankings for Honolulu Harbor in the year 2050 are low, but the potential consequence of failure is devastating. Therefore, the team gave this asset a high integrated risk ranking.

Climate vulnerabilities and asset risks. The study identified Honolulu Harbor, Honolulu International Airport, and Farrington Highway on the Waianae Coast as the three transportation asset groups with the highest integrated risk due to climate change. Overall, the project team found that warmer temperatures and increased wind speeds will not pose a large risk to transportation assets. The climate impacts of greatest concern are sea level rise, storm surge, and intense rainfall.

Leverage existing local knowledge and information. The project team efficiently assessed risk by drawing on the existing knowledge of an interdisciplinary group of planners, engineers, and managers. The workshop at the project start allowed the project team to identify critical sites without inventorying all of OahuMPO's assets. In addition, including experts from multiple disciplines in the process allowed the team to access specialty datasets quickly.

There is no single formula to calculate integrated risk. The project team evaluated integrated risk based on a combination of vulnerability, impact to infrastructure, and importance to society, but the weight of each factor varied by asset. For example, a high risk asset may have a low risk of climate vulnerability and impact to its infrastructure, but the climate impacts could result in large consequences on society.

Consider the societal and cultural consequences of asset failure. For example, the project team considered the impacts of climate change on vulnerable populations. A significant portion of the residents along the Waianae Coast are either over 65 or under 18, and many residents live at or below the poverty line. Resilient transportation assets such as roads designated for evacuation are critical for the population, but will be threatened by sea level rise and storm surge.

Recommendations for Next Steps

Include vulnerability assessment in LRTP. In 2012, the Hawaii Legislature passed Act 283, Climate Change Adaptation Priority Guidelines, which requires all county and state actions to consider climate change in their land use, capital improvement, and program decisions, including the LRTP. This Act paves the way for including a more detailed assessment of climate change in the next LRTP. 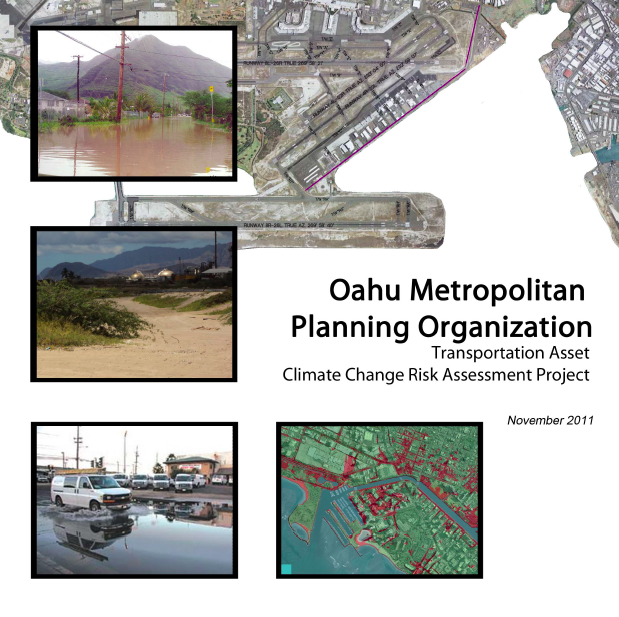