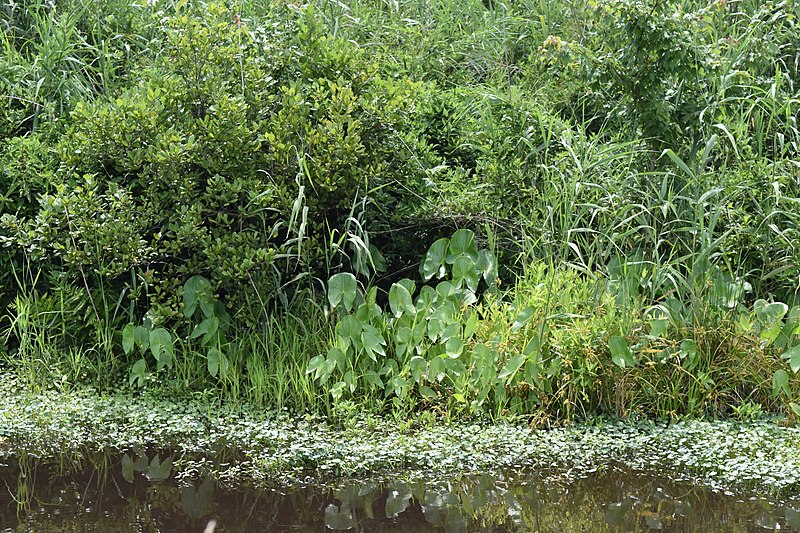 Pocosin Lakes National Wildlife Refuge. This image has been dedicated to the public domain.

Pocosin are freshwater wetlands with acidic peat soils and shrubs that provide habitat for terrestrial and aquatic species. Historical ditching and draining of pocosin in the eastern coast of the United States have resulted in dried-out peat soils that are extremely vulnerable to wildfires. Climate change-driven reductions in precipitation may exacerbate the drying of soils, increasing the risk of catastrophic wildfires that can destroy habitat and emit carbon. In 1990, the Pocosin Lakes National Wildlife Refuge was established to preserve these unique wetlands along North Carolina’s northeastern coast. A long-term peat restoration project is underway at the Refuge to increase the area’s water holding capacity and control flooding, prevent catastrophic wildfires, and increase carbon capture and storage potential. Since the 1990s, a total of 38,000 acres of pocosin peatland have been restored using water control boards and other infrastructure to control drainage.

Pocosin and peatlands ecosystems are one of the world’s largest terrestrial carbon sinks, and provide essential habitat for many terrestrial and aquatic species, including several migratory bird species. Pocosin are palustrine habitats or nontidal freshwater wetlands located in the southeastern coastal plains of the United States. The practices of ditching and draining pocosin for land-use development have resulted in dried-out soils that are extremely vulnerable to wildfires. Past wildfires have resulted in hundreds of thousands of acres burned and tens of millions of dollars spent on fire suppression. Dried peat soils also prevent these ecosystems from providing other ecosystem services, such as wildlife habitat, flood control, and carbon sequestration.

The Pocosin Lakes National Wildlife Refuge was established in 1990 with the goal of conserving these wetlands for wintering tundra swans, neotropical migratory birds, and a variety of other at-risk species. In 1985, the catastrophic Allen Road Fire burned over 95,000 acres, including a portion of the area that would be designated as the Refuge. In 2008, the Evans Road Fire burned nearly 42,000 acres. Both fires were caused by land-use practices (e.g., ditching and draining) and drought conditions, burning aboveground vegetation and causing several feet of peat soil loss. Catastrophic fire prevention was the impetus for the Refuge’s peatland restoration project, although sea level rise is of increasing concern. The restoration project is intended to increase the water-holding capacity of the area by conserving rainwater, decrease flooding, limit or eliminate catastrophic wildfires, and increase the carbon sequestration potential of these ecosystems. In addition, the project may slow the rate of future sea level rise across the Refuge.

The subtle slope of the Refuge (six feet of elevation change over six miles) required an intricate design process. The original drainage design for the project was completed by the Soil Conservation Service (now the U.S. Department of Agriculture’s Natural Resources Conservation Service [NRCS]). The NRCS continues to participate in the process along with hydrologists from nearby National Wildlife Refuges and researchers from North Carolina universities. Resources and datasets used to inform the project’s implementation include best professional practices for hydrology, expertise within the U.S. Fish and Wildlife Service (USFWS), and an adaptive management framework for ongoing water level management. Restoration is occurring across the Refuge in three sites that were identified as the areas that had been most significantly affected by hydrological alterations. Restoring the pocosin wetlands on the Refuge to a more natural state is challenging as the peat soil needs to remain wet so it does not oxidize or burn. Using levees and other water control structures, Refuge staff capture and release rainfall to keep peat soil moist in priority areas; however, heavy rain events can overwhelm the soils, resulting in excess water that must be drained.

Over 20 years, the Refuge has invested between $1–$2 million on this restoration. These funds were procured from federal, state, and nongovernmental sources, including substantial funding from USFWS. Some funds were provided by the Federal-Aid Highway Program due to the road and water control structure repairs that were included in the restoration plan.

The Refuge estimates that they have potentially diverted several catastrophic fires, saving an estimated $19 million in avoided costs to date. Staff have released project fact sheets and a hydrological modeling study that provide insight on the effectiveness of restoration efforts, management options, and future planning. The hydrological modeling study details the effects of various water level management scenarios on restoration efforts and potential downstream impacts. The results and maps included in the study are focused on a subset of the Refuge, but may be used to improve management decisions in other areas. Notable activities to date include:

The Refuge plans to continue to monitor the efficacy of the peatland restoration project by tracking water levels in groundwater wells, fire occurrence, habitat extent, peat soil carbon sequestration, and nitrogen and ammonia sequestration. The Nature Conservancy is currently conducting tests in two small blocks of land on the refuge—one restored, one degraded—to measure and compare carbon output. If it is proven that dry peat releases significantly more carbon than wet peat, it could open doors for innovative new carbon markets.

Barriers to the Refuge’s work are limited funding, limited staff capacity, climate and weather issues (e.g., heavy and prolonged rain events that overwhelm the stormwater storage capacity), federal permitting processes, and differing stakeholder ideas for how the Refuge should function. For example, some stakeholders think that the Refuge should serve a stormwater retention function and some think it should be drained before large storms to prevent the flooding of agricultural lands at lower elevations. There is also pushback from landowners concerning the Refuge’s high water levels next to their properties, particularly after heavy rain events. The Refuge generally does not pursue restoration on sites adjacent to privately-owned lands unless an agreement is made with the landowner. The next steps for the Refuge include long-term management of infrastructure and water levels. If additional funding becomes available, the Refuge would also expand the restoration efforts to more acres of peatland.