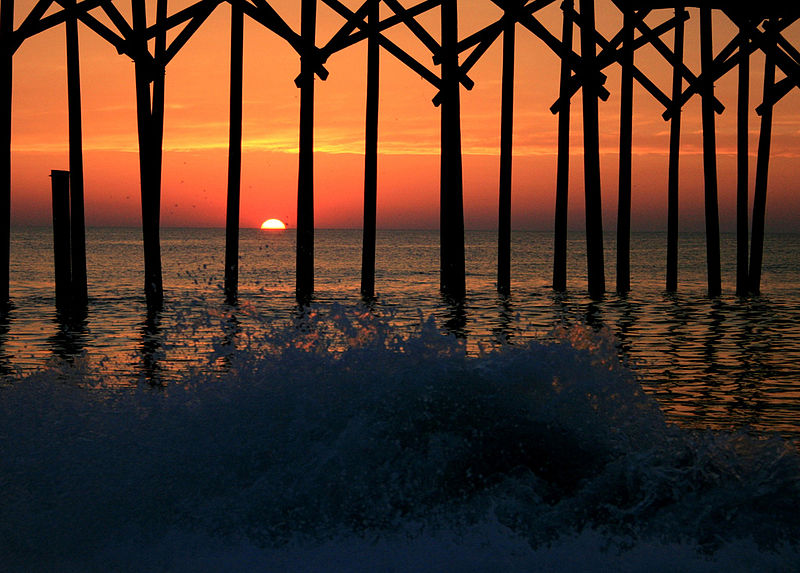 The North Carolina Sea Level Rise (NC SLR) Project (2005–2012) was a pilot study intended to improve scientific understanding of the ecological effects of sea level rise and storm surge on North Carolina coastal habitats and develop better physical and ecological models and tools to forecast these effects. The National Oceanic and Atmospheric Administration’s (NOAA) Center for Sponsored Coastal Ocean Research (CSCOR) invited North Carolina coastal managers and stakeholders to participate in an effort to identify and discuss the utility of modeling and mapping tools in planning for and mitigating the regional impacts of rising sea levels and increasing storm intensity. This effort was intended to help scientists design user-friendly tools to facilitate planning for the effects of long-term climate changes. Coastal land managers and scientists continued to work together to develop accessible, interactive sea level rise maps and tools for the state.

North Carolina is a state that is acutely vulnerable to the effects of sea level rise as it is home to a chain of low-lying barrier islands and the largest estuarine system on the East Coast. More than 2,300 square miles of land within North Carolina will be exposed to inundation from one meter of sea level rise. In 2005, a project to research the projected local impacts of sea level rise kicked off with funding from the National Centers for Coastal Ocean Science (NCCOS) through its Ecological Effects of Sea Level Rise (EESLR) program. It was the pilot study for a national program to improve understanding and scientific knowledge of sea level rise and surge impacts on coastal habitats, as well as to develop ecological models to forecast these impacts. North Carolina was chosen as the pilot state because of the availability of high-resolution LIDAR data for the coastline..

The project study area included the Neuse River and the Pamlico, Back, Bogue, and Core Sounds. A cooperative network of five multi-investigative projects were funded including:

participate in a workshop to help plan for sea level rise and increased storm intensity. The goal of the workshop—Planning for the Impacts of Sea Level Rise and Climate Change—was to solicit input from the coastal management community for designing scientifically-informed modeling and mapping tools. Additional objectives included:

The workshop was considered a success and a model NOAA initiative. A Sea Level Advisory Group was formed for managers interested in keeping up with progress on NOAA’s Sea Level Rise Project. The results from the workshop and final report—Planning for the Impacts of Sea Level Rise and Climate Change—were intended to help scientists begin to design useful management products (e.g., user-friendly mapping and modeling tools).

In 2009, an additional workshop was held to again bring together scientists and coastal zone managers to update stakeholders on the state of sea level rise research within North Carolina. In this workshop, scientists shared results from a North Carolina Sea Level Rise Project that focused specifically on sea level rise impacts within the state, and developed a list of potential coastal management needs. Attendees identified a need for geospatial data and maps that were specific to communication, decision-making, and conservation needs. These needs marked a shift towards the second phase of the project—Maps, Marshes, and Management Applications—in which scientists moved from studying direct ecological impacts to developing maps and models accessible to coastal planners, policy-makers, and managers. This phase of North Carolina’s EESLR project was spearheaded by East Carolina University’s Department of Geology in conjunction with The Nature Conservancy, NOAA’s Cooperative Institute for Climate and Satellites, and the Renaissance Computing Institute and was completed in 2012.

This eight-year-long process exemplifies the benefits of scientists and coastal land managers working together. Through this collaboration, research on sea level rise within North Carolina was not only conducted but also translated into a format that can serve a variety of stakeholders. This effort served as a pilot project for the broader Effects of Sea Level Rise Program (formerly known as the Ecological Effects of Sea Level Rise Program), which has expanded to include projects in California, Florida, Hawaii, and Maryland.

The Center for Sponsored Coastal Ocean Research (CSCOR) uses a multi-disciplinary approach to understanding and predicting the impacts of natural and anthropogenic influences on coastal regional ecosystems, communities, and economies.