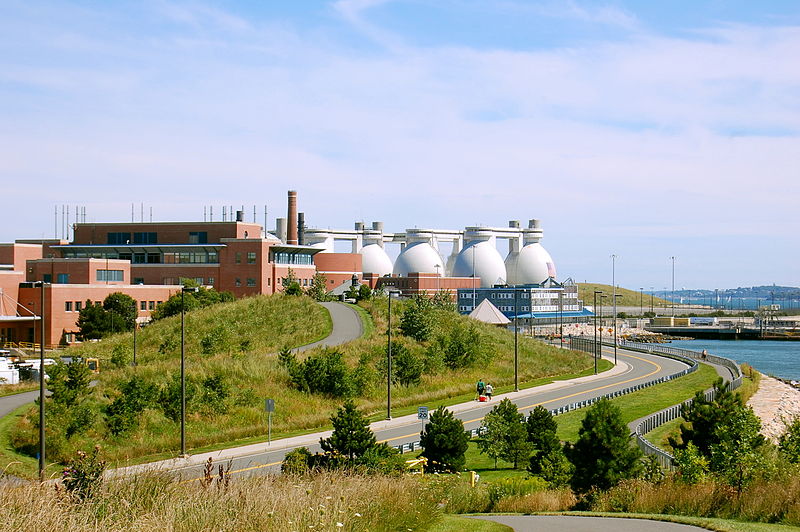 In the 1980s, the Massachusetts Water Resources Authority began to plan for a new wastewater treatment plant on Deer Island in Boston Harbor. The treatment plant’s effluent is discharged through a gravity-fed pipe into Boston Harbor. Planners were concerned that projected sea level rise would disrupt the gravity-fed pipe, requiring the installation of pumps. The planners decided to elevate portions of the wastewater treatment plant by 1.9 feet to accommodate for projected sea level changes through 2050—the planned life of the facility—making it one of the first climate-informed infrastructure designs. More recent sea level rise projections indicate that the decision to elevate the plant will likely protect the infrastructure over the next century, extending beyond the facility’s planned lifetime.

The Massachusetts Water Resources Authority (MWRA) serves over 2.5 million people in eastern and central Massachusetts in the greater Boston region. It was created in 1985, replacing the Metropolitan Sewer District (1889–1985). The MWRA has more than $6 billion invested in infrastructure and supporting facilities, and manages all sewer and water plants for the greater Boston area. One of the MWRA’s primary wastewater treatment plants was built on Deer Island, located in Boston Harbor with over 2.6 miles of shoreline. A 1938 hurricane caused massive erosion, which ultimately connected the island to the mainland. The island houses the Deer Island Primary Wastewater Treatment Plant and over 60 acres of parkland. The treatment plant serves over 2.5 million people in the Boston area.

In 1968, the original Deer Island Primary Wastewater Treatment Plant was completed. It underwent a substantial overhaul in the 1980s to meet Federal and State pollution standards to protect Boston Harbor. The new plant cost over $3.8 billion to construct and began operating in 1995. During the update, the MWRA opted to consider the future effects sea level rise could pose to the facilities. The effluent from the sewage treatment plant is discharged through a gravity-fed downhill pipe, a cheap option to pump sewage downhill. Planners were concerned that sea level rise would inundate the plant and thus require a protective barrier such as a seawall. If this were to happen, the Deer Island facility would have to install pumps to transport the effluent over the wall.

The plant was built 1.9 feet higher than it would otherwise have been to accommodate projected sea level rise through 2050, the planned life of the facility. The outfall diameter was also increased from 24 to 24.5 feet to accommodate sea level rise. Construction on Deer Island Wastewater Treatment Plant was completed in 1998. Current operational strategies to address the impacts of flooding on the plant include the deployment of staff, mobile generators, and other equipment to pre-determined locations in advance of storms, and the creation of a back-up water and wastewater operations control center at the nearby Carroll Treatment Plant.

The Deer Island Wastewater Treatment Plant’s planners proactively incorporated the potential impacts of sea level rise into their initial building codes. In this case, it was calculated to be less expensive to build the facility at a higher height in the original design rather than trying to construct protective barriers in the future. More recent sea level rise projections indicate that the initial decision to raise the plant will protect the infrastructure for the next century, extending even beyond the planned life of the facility. Overall, the plant’s 9.5-mile, 24-foot diameter outfall tunnel should remain functional through 2050 regardless of the effects of sea level rise within Boston Harbor.

The climate-informed design and construction of the Deer Island Wastewater Treatment Plant is just one example of MWRA’s work to address climate change. The MWRA Master Plan incorporates climate considerations throughout, including both mitigation and adaptation goals and objectives. Looking ahead, MWRA is incorporating sea level rise into all of their water system management by evaluating sewer facility vulnerability, modifying infrastructure to increase spillway capacity, and using LiDAR mapping to project the future impacts of sea level rise on other facilities.

MWRA is a Massachusetts public authority established by an act of the Legislature in 1984 to provide wholesale water and sewer services to 2.5 million people and more than 5,500 large industrial users in 61 metropolitan Boston communities.