Residents in Kivalina, Alaska have pursued relocation efforts for almost 20 years because of overcrowding and erosion problems. The village twice identified preferred relocation sites but both were deemed unsuitable by the U.S. Army Corps of Engineers (USACE) due to projected flooding and erosion problems. The relocation process is in a stalemate as the village seeks technical assistance and funding to support their efforts, and identify a more suitable location. In the meantime, severe coastal storms, thawing permafrost, and shoreline erosion continue to threaten both life and property in the area.

Kivalina is located at the tip of an eight-mile barrier reef about 80 miles north of the Arctic Circle. It is a traditional Inupiat Eskimo village in which subsistence activities provide the majority of food supply (e.g., seal, walrus, whale, salmon, and caribou). Ninety-eight percent of the population is the Inupiaq people of Kivalina, also known as Kivallinigmiut. As of 2018, Kivalina was home to 440 residents living in approximately 70 homes.

Relocation has been a long-term issue in Kivalina. In 1953, overcrowding and erosion motivated a public vote for relocation but it was turned down with a 50/50 vote; a similar vote and result occurred in 1963. Since 1953, when the village covered approximately 54 acres, erosion activity shrank the area to less than 27 acres, making relocation more necessary. Finally, in 1992, residents voted to begin the process of relocating due to ongoing hazards, including storm surges, sea ice encroachment on land, erosion, landslides, and earlier, shorter hunting seasons. Various sites have been identified and evaluated for suitability. Residents voted to move to Igrugaivik in 1998 and Kiniktuuraq in 2000, both of which were rejected by the USACE. Kiniktuuraq, a village about 7.5 miles away from Kivalina, is still preferred but the relocation process has been interrupted by various problems.

The Kivalina Relocation Master Plan was released in 2006 by the USACE. The report examines a few alternatives for the village including: Do Nothing, Improve Existing Site, and Move to a New Site (e.g., Imnaaquq Bluffs, Simiq, Tatchim Isua, Kiniktuuraq, Igrugaivik, or Kuugruaq). The report concludes that Alternative 1 (Do Nothing) is not suitable because Kivalina will soon be overrun by flooding and erosion issues. Alternative 2 (Improve Existing Site) is also not suitable because of existing environmental and socioeconomic issues (e.g., erosion, overcrowding, poverty). Relocation was determined to be the preferred alternative and was supported by the ACE’s 2006 erosion study (Alaska Village Erosion Technical Assistance Program). This assessment determined that the estimated cost of moving Kivalina is $95–125 million and that the village has 10–15 years before existing locations are overcome by erosion and flooding problems. More recent estimates range from $100–400 million.

Despite relocation being determined as the best option and of the utmost urgency, many of the sites examined in the Kivalina Relocation Master Plan as potential relocation options were declared unsuitable due to cost, susceptibility to erosion and flooding, and/or social and cultural objections. The village’s preferred relocation site, Kiniktuuraq, was deemed to be “geotechnically inappropriate and strategically problematic” by the USACE because of ongoing erosion and flooding potential. The USACE instead suggested Tatchim Isau and Imnaaquq Bluffs as alternatives.

In the interim, Kivalina participated in two planning processes between 2009 and 2016 through the Alaska Climate Change Impact Mitigation Program, which provides technical assistance to communities. The first effort—the 2009–2010 Consensus Building Project—assessed natural hazards and relocation options, and gathered community input through surveys and workshops to identify areas of common ground with respect to the future of Kivalina. The second effort—the 2014–2016 Alaska Community Coastal Protection Project—focused on developing community resilience plans for Kivalina, Shishmaref, and Shaktoolik. This effort was funded through the Alaska Coastal Impact Assistance Program in partnership with the state Division of Community and Regional Affairs. An Inter-Agency Planning Work Group was established during this effort to support the implementation of several priority actions from the 2016 Kivalina Strategic Management Plan. The plan classifies actions as imminent (e.g., urgent actions needed immediately) and critical (e.g., actions needed within five years). Imminent actions include conducting emergency drills and exercises and developing and distributing personal emergency kits. Critical actions include water and sewer upgrades, constructing an access road for a new school, installing erosion control measures for the airport and landfill, and increasing the use of traditional ecological knowledge in decision making.

The USACE determined that the village-preferred site, Kiniktuuraq, was unsuitable and prone to flooding and erosion in the 2006 Relocation Master Plan. The alternate sites proposed by the USACE are unacceptable to the village due to costs and inconvenience to their subsistence activities and cultural lifestyle. Kivalina has asked that a third party step in to reassess the alternatives in the Relocation Master Plan; the Climate Change Sub-Cabinet’s Immediate Action Workgroup has proposed that a state agency be the lead in this process.

Kivalina continues to apply for state and federal funding and support to build capacity and technical assistance to facilitate the relocation process. The village faces a number of problems including choosing the best site, locating funding, and dealing with internal social issues such as overcrowding, poverty, and public health impacts. Meanwhile, increasing coastal storms, thawing permafrost, and chronic shoreline erosion continue to threaten both life and property on the island, particularly as the Strategic Management Plan notes that Kivalina may become uninhabitable by 2025. The village is running out of room to safely house critical infrastructure while accommodating important cultural sites, such as the burial grounds that are expected to be lost to sea level rise in the next few years.

In January 2020, the Alaska Institute for Justice requested a United Nations investigation into the United States’ lack of support for the displacement and relocation of indigenous peoples affected by climate change. The complaint was filed on behalf of Kivalina and tribes in Louisiana (e.g., Point-au-Chien Indian Tribe, Grand Caillou/Dulac Band of Biloxi-Chitimacha-Cochtow Tribe, Grand Bayou Indian Village, and the Isle de Jean Charles Band of Biloxi-Chitimacha-Chochtow Indians).

The U.S. Government Accountability Office has identified thirty other coastal villages in Alaska that may need fast-paced relocations to escape erosion and melting permafrost. At least 12 Native Alaskan villages have elected to explore relocation as a viable alternative as their towns are swallowed by the sea. These sites include Newtok, Kivalina, Shishmaref, Shaktoolik, Allakaket, Golovin, Hughes, Huslia, Koyukuk, Nulato, Teller, and Unalakleet. In November 2019, Kivalina ranked as the third most at-risk community in Alaska—behind Shaktoolik and Shishmaref, respectively—due to the combined threats of erosion, flooding, and melting permafrost. 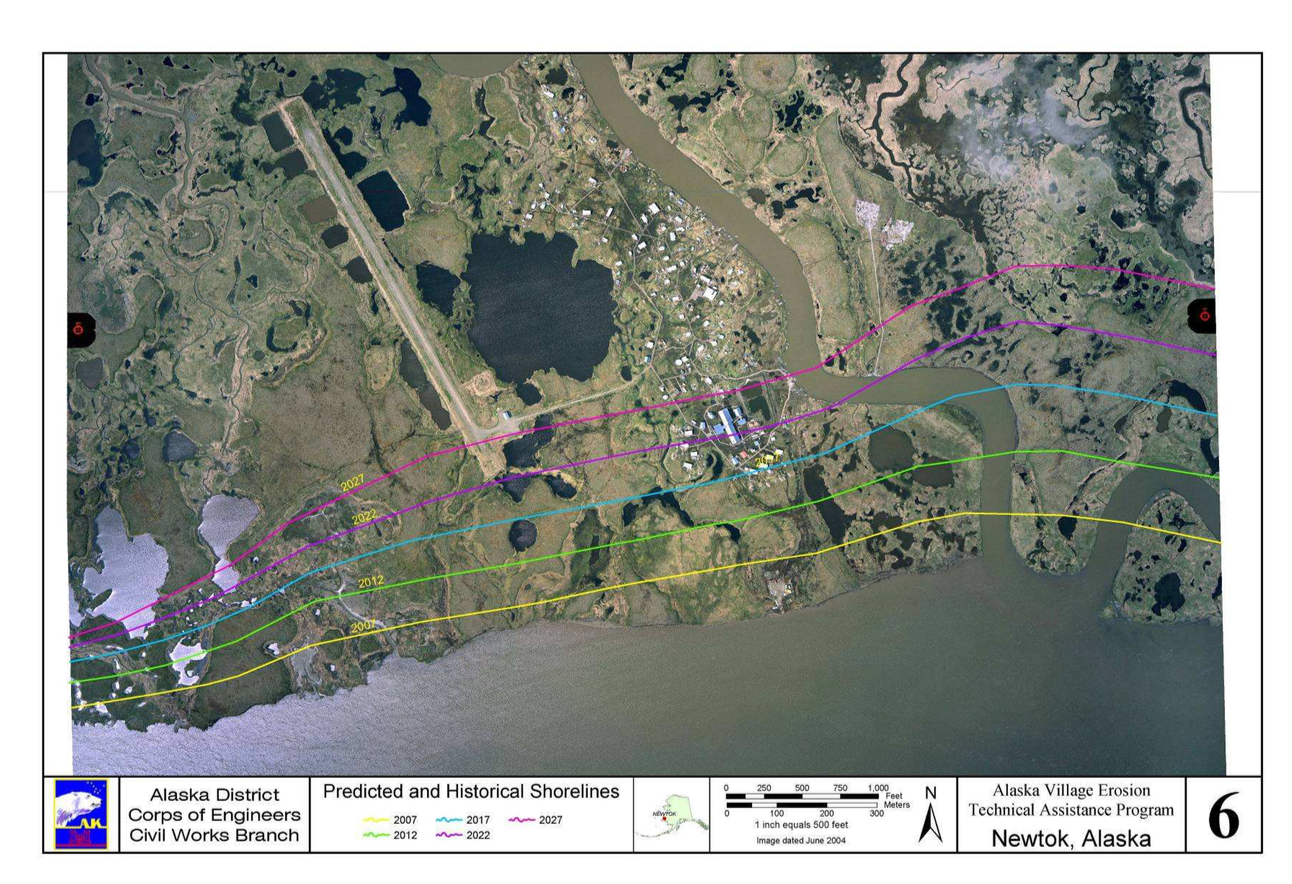 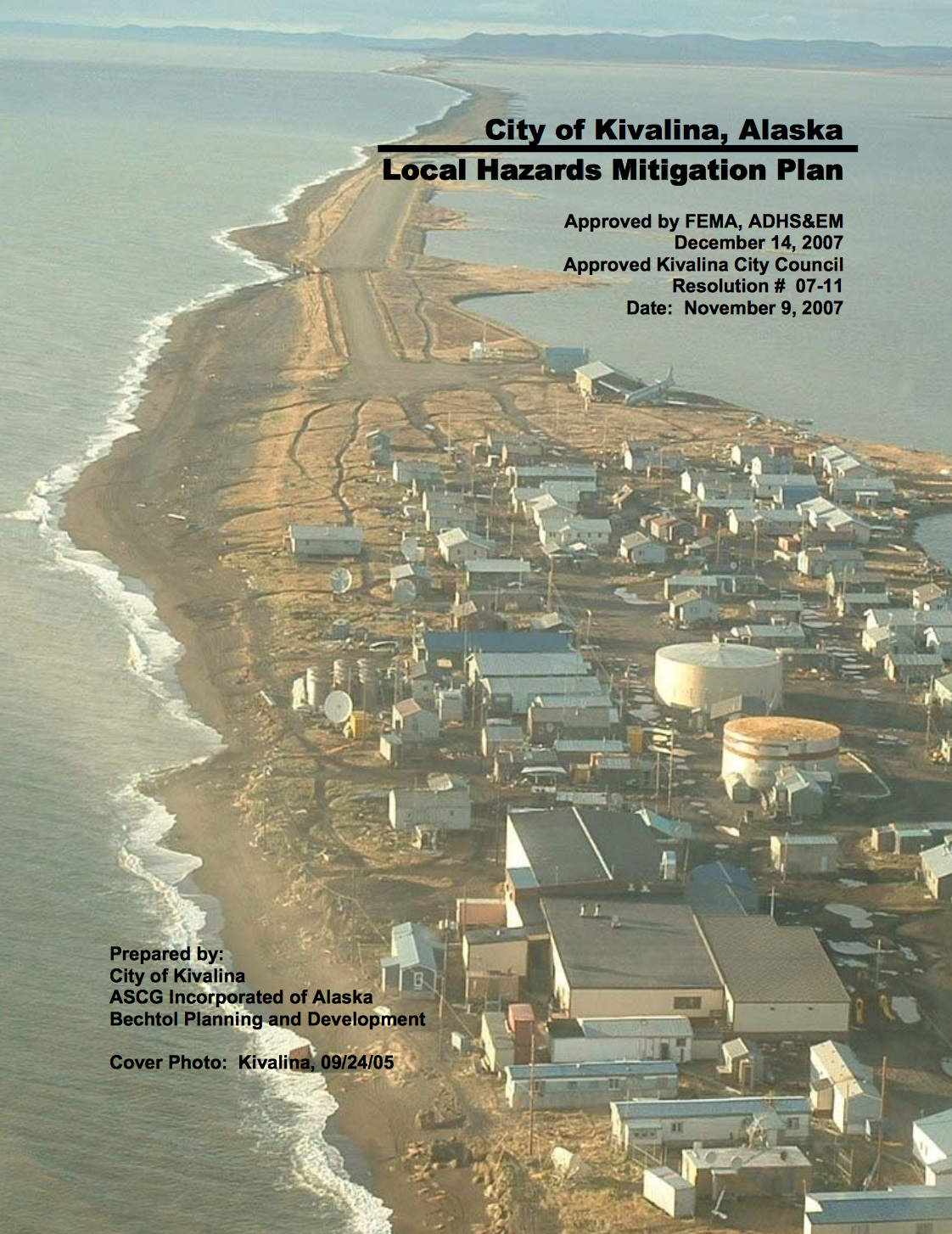 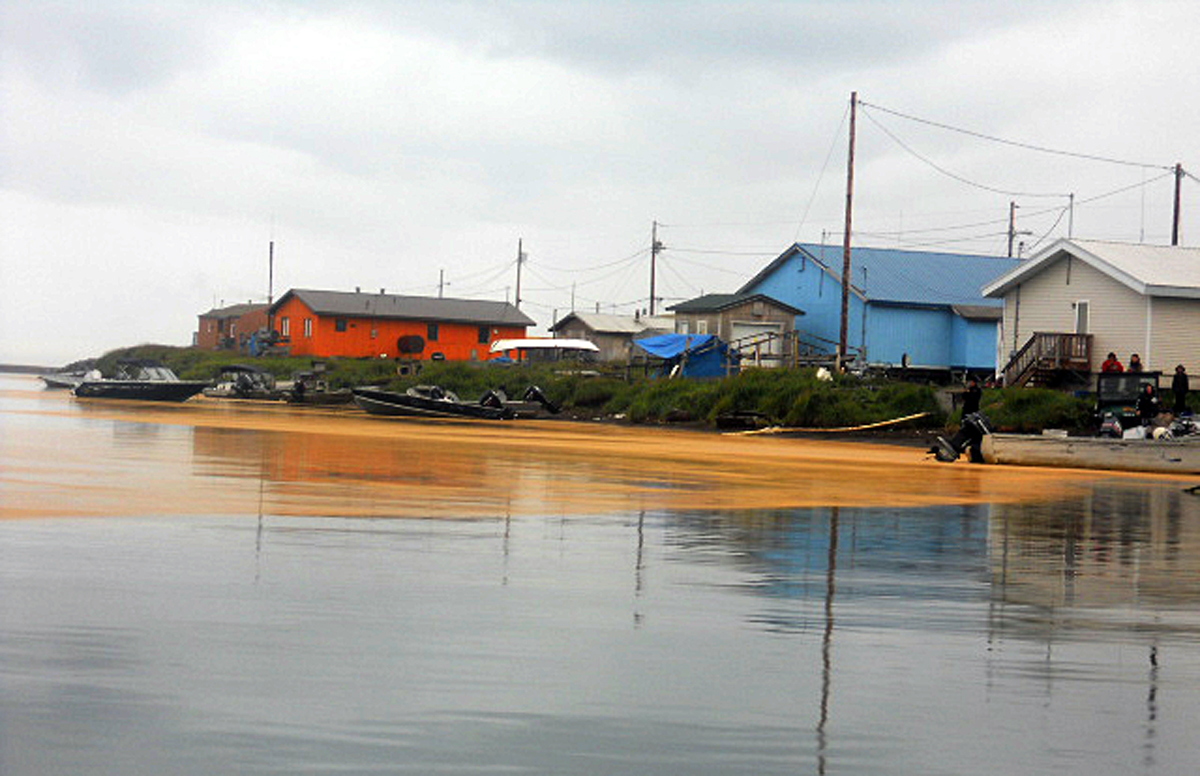