A Roadmap for Action: The Chicago Climate Action Plan 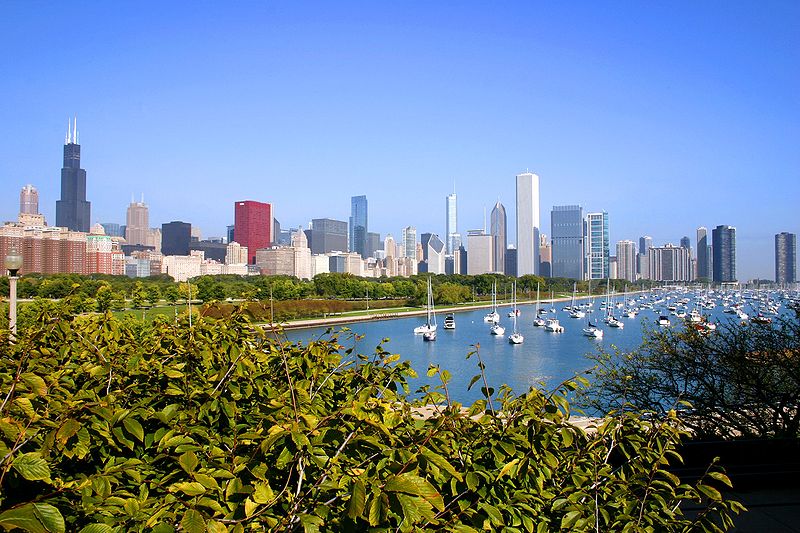 Photo attributed to J.Crocker. No endorsement by licensor implied.

In 2006, former Chicago Mayor Richard M. Daley established a Climate Change Task Force (Task Force) that was charged with evaluating the potential impacts of climate change and developing an action plan for the city. After conducting impacts, economic costs, and risk assessments, the city released the Chicago Climate Action Plan (CCAP) in late 2008. The plan functions much like a roadmap for climate action with five overarching strategies, including nine adaptation actions. Implemented adaptation actions thus far include integration of future climate scenarios into stormwater management as well as the development of green urban design projects to reduce heat and flooding.

The City of Chicago, located on the shores of Lake Michigan, is the third largest city in the United States. It is located within the Chicago Portage, which connects the watersheds of the Mississippi River and the Great Lakes. Major freshwater bodies in the area include Lake Michigan and the Chicago and Calumet rivers. The city’s climate is already experiencing change, including several degrees of warming since 1980. Impacts of concern include increases in both annual and extreme temperatures, changing precipitation patterns, changing lake levels, and decreasing ice cover, along with a host of other climate impacts. Increasing temperatures will result in more frequent heat waves, more 100° days, and serious repercussions for public health. More frequent and extreme precipitation events will result in flooding and could overwhelm the city’s sewage systems, causing the pipes to back up with raw sewage.

The City of Chicago’s climate change efforts began in 2006 when then Major Daley established a multi-stakeholder Task Force to develop plans to reduce the city’s greenhouse gas emissions and help the city adapt to both existing and projected climate impacts. The Task Force commissioned in-depth impacts and vulnerability assessments and an economic analysis of projected impacts and costs of inaction. The CCAP effort has been funded by a coalition of diverse partners and has drawn financial support from a host of sources ranging from federal stimulus funds to private foundation support, state funds, and pro bono and in-kind support. Since 2008, the CCAP has received or leveraged over $142 million in funds.

Research and Analysis
The City of Chicago’s climate change planning efforts were characterized by robust assessments of impacts, economic costs, and risks. Chicago was interested from the beginning in a joint mitigation and adaptation planning effort and wanted to base decisions on sound science. The impacts assessment (Climate Change and Chicago: Projections and Potential Impacts), spearheaded by researchers from the University of Illinois at Urbana-Champaign and Texas Tech University, examined impacts under two futures – a high emissions scenario of 1000 ppm CO2 by 2100 and a low emissions scenario of 550 ppm CO2 by 2100 (Hayhoe and Wuebbles 2007). The high scenario represented business-as-usual practices and the low scenario represented a future in which major reductions in greenhouse gases were made over the coming years. The analysis included scientific and statistical downscaling of three climate models and consideration of historical observations. The assessment found that Chicago was already experiencing effects from climate change and noted that projected impacts, including changes in temperature and precipitation, will have serious ramifications for the city, its infrastructure and services, and the health and safety of residents.

The second phase of analysis was conducted by the risk management firm Oliver Wyman; staff used the initial assessment results to conduct an economic risk analysis of projected impacts to city departments’ infrastructure and services under the two emissions scenarios from 2010-2100. The analysis looked at both the costs of inaction and the benefits of adaptation action. The findings indicated that the total cost of climate-induced impacts on city departments could range from $690 million under the low emissions scenario to $2.54 billion under the high emissions scenario; the analysis concluded that the city should pursue mitigation and adaptation efforts in order to maximize the reduction in potential economic costs for the city (Oliver Wyman 2008).

The third phase involved a risk prioritization of the findings of the impacts assessment and economic analysis based on likelihood and consequences of occurrence by MWH Global, an engineering firm. Focusing on four primary impacts – extreme heat events, intense precipitation, infrastructure damage, and habitat degradation – MWH developed and ranked proposed adaptation actions; these actions were ranked according to benefits, costs, time, and projected barriers to implementation, and MWH provided recommended actions based on these rankings (MWH 2008).

Planning
The CCAP was released in 2008 and outlines five strategies and 35 actions for Chicago to reduce its emissions and adapt to climate change. The five overarching strategies include: (1) Energy Efficient Buildings, (2) Clean and Renewable Energy Sources, (3) Improved Transportation Options, (4) Reduced Waste and Industrial Pollution, and (5) Adaptation. Of the 35 actions, nine apply to adaptation; these include: (1) Manage Heat, (2) Pursue Innovative Cooling, (3) Protect Air Quality, (4) Manage Stormwater, (5) Implement Green Urban Design, (6) Preserve Our Plants and Trees, (7) Engage the Public, (8) Engage Businesses, and (9) Plan for the Future.

Since the release of the CCAP, considerable progress has been made across the city in both the reduction of greenhouse gases and implementation of adaptation measures. The city created an Adaptation Advisory Group to provide high-level aid and guidance for the city’s adaptation efforts, including implementation, monitoring success, and communications. The city’s Natural Environment Adaptation Working Group is also prioritizing the protection and enhancement of connectivity and corridors. The group created a guiding document, which includes the following strategies specific to enhancing connectivity: (1) expanding the Green Infrastructure Vision map in order to identify and prioritize key areas of connectivity, (2) protecting buffers and open space, (3) improving existing habitat on publicly-owned properties (e.g., parks, preserves) that act or may act as critical corridors, (4) promoting potential expansion onto private lands (e.g., golf courses, residential yards), and (5) restoring wetlands and other habitats that maximize connectivity.

The city developed evaluation metrics and plans to measure success through regular progress reports. Much of the progress to date on the adaptation strategy has been focused on stormwater management and green urban design. There have been increased efforts to establish permeable surface areas, green roofs, and urban tree canopies across the city. The Chicago Trees Initiative aims to mitigate the effects of increasing temperatures and stormwater management problems by increasing canopy cover in the city. Planting lists were updated to include the foliage and trees that will be more likely to survive in a warmer climate; for example, white oak, the state tree of Illinois, is no longer on the city’s approved urban planting list. Instead, tree species from the south, such as swamp oaks, which are acclimated to warmer climates, have been added to the list. In addition, the Green Urban Design plan has prioritized efforts to increase permeable surfaces around the city through the Green Alley Program. This program has both adaptation (reduced stormwater runoff, temperature regulation) and mitigation (increased energy efficiency, reduced energy costs) benefits.

The cutting-edge CCAP planning process produced a number of resources, tools, and products that may help other urban areas looking to prepare for climate change. The city also released a ‘lessons learned’ document from the planning process that includes a checklist and analysis of best practices (Parzen 2009). One example is the utility of the impacts, economic, and risk assessments; these activities proved vital to the success of the planning process, providing Task Force members with a common basis from which to make informed decisions. The results of the assessments were also useful for communicating with the public. The documents produced in these processes may serve as useful tools for other cities looking to prioritize climate action and communicate with multiple stakeholders.

The City of Chicago is located on Lake Michigan, in Cook County, in northeastern Illinois.

City government is divided into executive and legislative branches. The mayor is the chief executive while the City Council, elected from 50 wards, is the legislative body.