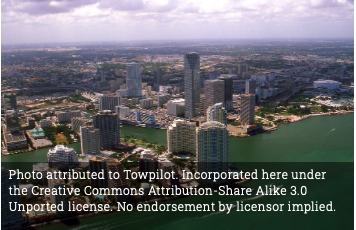 The County is taking measures to adapt its wastewater treatment plants and pumping stations to the impacts of sea level rise including threats to water quality and supply, salt water intrusion, and flooding. MDC has also developed a sea level rise strategy to minimize the socioeconomic, infrastructure, and ecological impacts of climate change.

In 2010, MDC’s Office of Sustainability was created in response to growing awareness of sea level rise impacts, which had initially become very visible at King Tide. A citizen-driven Sea Level Rise Task Force was launched, headed by an elected county official. The Task Force subsequently produced a detailed report with six recommendations for the County Commissioners to consider. These recommendations became resolutions for MDC to address.

The work of the Task Force became the impetus for the Enhanced Capital Plan for Sea Level Rise (ECP). To develop the ECP, MDC researched what other cities, such as for New York City, San Francisco, Seattle, Boston, and Rotterdam, and consulting firms had done to address sea level rise impacts. The Office of Sustainability and the Miami Climate Alliance, a collaboration of NGOs, wanted to address the issue that there was no single line item in the county budget to address sea level rise. Up until that time, the sea level rise response funding had been embedded in other programs; however, addressing the sea level rise challenge required significantly more financial resources. An organized outreach campaign that included students in life jackets brought the point home to fiscal decision-makers and, as a result, the mayor created the Office of Resilience and a four year budget was allotted for the ECP. The ECP later evolved into the MDC Sea Level Rise Strategy. The strategy was built off of years of research and collaborative knowledge. For example, the county’s Water and Sewer Department (WASD) developed revised design standards to protect facilities from the impacts of climate change, and created a storm surge and ground and surface water models that are used in the county’s sea level rise adaptation efforts.

The goal of MDC’s Sea Level Rise Strategy was to identify and develop financially feasible mitigation and adaptation strategies to prepare for sea level rise and coastal storms. To develop the strategy, “strawman” alternatives were developed via small meetings with MDC staff, academics and non-governmental organizations. Public outreach was conducted through workshops and tabling events. The U.S. Climate Resilience Toolkit was a resource as well as Compact, NOAA, IPCC, and USACE climate resources. Impacts information was incorporated from previous studies of storm surge and groundwater input (USACE/USGS) and technical assessments (such as cost of adaptation measures and economic implications) were included from previous studies and FEMA models. MDC then conducted technical analyses of the alternatives and went back to the public for a final round of input.

MDC’s WASD has implemented a number of structural and non-structural approaches to improve and protect county-owned assets. The WASD developed a Design Guidebook for each water treatment plant and for pump stations to help engineers understand future sea level projections and the elevation of each asset. This document is used in the planning and design of all infrastructure projects. Additionally, the WASD is in the process of developing a decision matrix that examines the costs, risks, and impacts that climate change will have on operations. The matrix allows the department to compare adaptation alternatives and then make decisions on investment and design. With regards to existing infrastructure, the WASD has elevated assets, added back-up generators to plants, moved mechanical and control centers to the second floors of treatment plants, and  maintains replacement components for pump stations.

The Sea Level Rise Strategy was released in March 2021 and details key actions and capital projects to advance adaptation goals, create local jobs, and help MDC recover from climate impacts. The Strategy consists of a main report and three complementary mini guides (summary of impacts, areas mini-guide, tools and case studies mini-guide) that provide guidance for the mayor and governing bodies, raise awareness among the 27,000 MDC employees, and help with education, outreach, and technical assistance for communities. The Strategy describes five complementary adaptation approaches that communities can combine to adapt in a more comprehensive way. The strategies range from raising the land on artificial fill to expanding waterfront parks to creating a network of small spaces for water in neighborhoods.

MDC is now looking to develop quantitative resilience metrics, create outreach visuals, and develop a status baseline for future planning efforts. MDC is also planning to support resilience projects at the parcel level, such as for firehouses or parks. Another future goal is to push forward policy and regulation for private development to build higher and consider drainage in response to climate impacts.