Understanding and Modeling the Impacts of Human Behavior and Climate Change on the Maumee River Watershed, Ohio 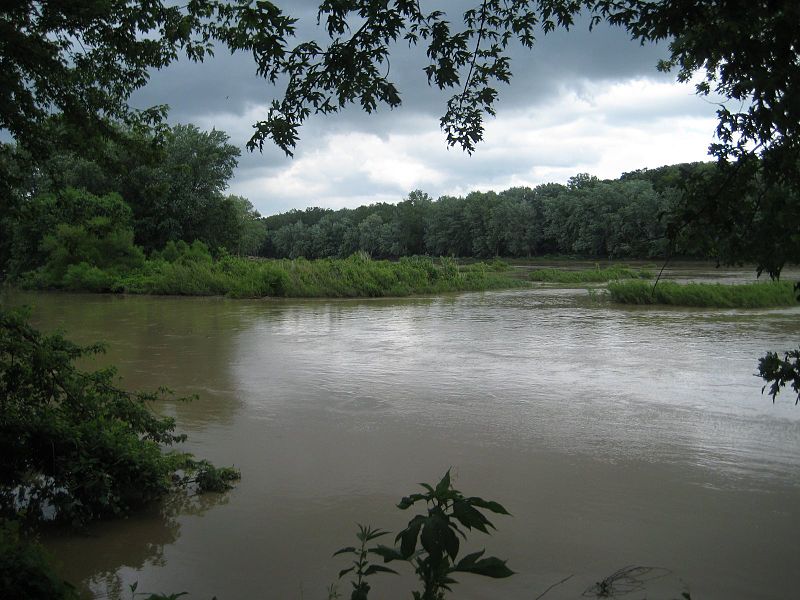 Photo attributed to John A. Good. This work has been released into the public domain by its author. No endorsement by licensor implied.

The Maumee River watershed, located in northwestern Ohio, is the largest watershed in the Great Lakes region. Due to multiple sources of pollution including agricultural runoff, combined sewer overflows, and other non-point sources, the health of both the river and Lake Erie are suffering, resulting in reduced fish populations and more harmful algal blooms. Predicted climate change impacts such as heavier and more frequent rainfalls will likely exacerbate existing problems. In response, researchers at Ohio State University and Case Western Reserve University have initiated a project exploring how people’s behaviors upstream can offset negative impacts of current and future conditions and preserve important ecosystem services provided by the lake. They also plan to develop land use models to assess the impacts of climate change on agricultural practices and forecast how behaviors may change under future conditions.

The Maumee River watershed, located in western Ohio, is the largest watershed in the Great Lakes basin covering over 8,300 square miles. A large portion of the watershed has been designated as an Area of Concern due to substantial agricultural runoff and other non-point source pollution as well as old dumps and contaminated industrial sites, combined sewer overflows, and disposed dredged materials (EPA 2012). Agricultural and the other land use practices lead to increased runoff of nutrients (e.g., phosphorous) and sediment downstream into Lake Erie, potentially resulting in reduced water clarity, increased incidents of harmful algal blooms, and a loss of high-value fish populations. A large part of the economy in the Maumee River watershed relies on ecosystem services provided by the lake including tourism, fisheries, industrial, and recreational opportunities, which are threatened by these impacts. Watershed restoration work has been underway for over 20 years to return the watershed to fishable and swimmable condition, although work still remains to repair habitats.

Predicted climate changes in the Great Lakes region including increasing air temperature and precipitation and decreasing ice coverage are likely to alter river discharge patterns, increase soil erosion, and increase both the sediment loads of the river and river scour on bed and banks. These impacts will wash more nutrients and sediments from upstream areas of the watershed downstream into Lake Erie, compounding existing problems. In response to current and future threats for the Maumee River watershed, researchers at Ohio State University and Case Western Reserve University received National Science Foundation funding for a 4-year project to examine how land use practices in the watershed affect the water quality of Lake Erie and how people’s perceptions of the lake influence those practices. As part of this project, researchers plan to develop decision-making models to increase understanding among policy makers and watershed managers about how guidelines and regulations are formed, and identify upstream practices that improve the downstream ecosystem. The researchers also plan to incorporate multiple climate scenarios to assess the potential impacts on agricultural practices and forecast how behaviors may change under new conditions.

The first phase of the project includes focus groups and the development of a decision-making model to determine the link between people’s perception of Lake Erie, how that perception impacts lake health, and how lake health in turn influences people’s perceptions. For the focus groups, researchers plan to interview different groups of people (e.g., agricultural and urban populations) living within the Maumee River watershed. To further understand what factors are driving people’s decisions, how regulations are made, and how actual decisions are made by people on the ground researchers plan to hold workshops and interviews with scientific experts, watershed managers, and government officials as well as survey the general population. From these activities, they hope to develop a model that predicts how people are likely to respond to a given set of conditions. Following this broader survey of populations within the watershed, researchers plan to focus specifically on farmers, their agricultural practices, and what influences their land management decisions.

The second phase of the project will focus on the development of land use models. These models are likely to be based on traditional methods that consider past developments as well as the new models on people’s behaviors, and will include hydrologic models to examine how water flows in the watershed. Models will also include different climate change scenarios such as increased rainfall and warmer temperatures to allow researchers to examine the potential impacts on agricultural practices, people’s perceptions of lake health, and how behaviors may change as future conditions change.

The ultimate goal of this work is to build a model that can be used to predict future farmer behavior as the climate and economy change, with the hope of limiting agricultural runoff into the watershed to prevent harmful algal blooms and other negative impacts to the ecosystem. The results of this project will be used to help increase understanding about how climate change is going to impact the local system - both ecological and social - and to identify ways in which the water quality of western Lake Erie can be improved to maintain ecosystems services that people depend on.

Ohio Sea Grant is a statewide program that supports greater knowledge and stewardship of Lake Erie and the Great Lakes through research, education and outreach. It is part of the National Oceanic and Atmospheric Administration (NOAA) Sea Grant College Program, which includes 32 state programs located in every coastal and Great Lakes state and Puerto Rico.