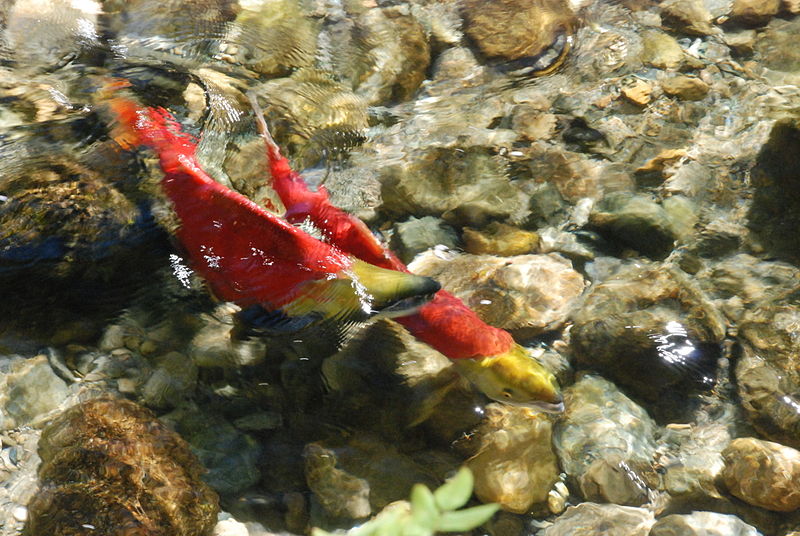 The Salmon Watcher Program is one of the “Climate Steward” examples provided in the U.S. Global Change Research Program’s Climate Change, Wildlife, and Wildlands Toolkit for Formal and Informal Educators. The program trains volunteers to collect information on spawning salmon in streams and rivers throughout two Washington counties; these monitoring efforts help scientists determine natural and climate-based fluctuations in populations. After 20 years of data collection, monitoring, and service, the Salmon Watcher Program ended in 2015.

Many salmon species in Washington State have been designated as threatened or endangered. Populations have declined due to disease, overfishing, and dam construction; climate change is also a threat. Earlier snowmelt and increased precipitation rates will alter flow patterns of the streams and rivers that salmon use; warmer waters may also affect salmon physiology and alter behavior. The Salmon Watcher Program, founded in 1996, trained citizen scientists to monitor the status of salmon populations in streams and rivers throughout King and Snohomish counties. This project is featured as one of the case studies in the U.S. Global Change Research Program’s Climate Change, Wildlife, and Wildlands Toolkit for Formal and Informal Educators, and was developed to aid educators in communicating how climate change will affect the environment and how people can become “climate stewards.”

The Salmon Watcher Program trained volunteers to identify different salmon species, including Chinook, coho, sockeye, kokanee, and chum. Volunteers monitored salmon populations at assigned streams twice a week between September and December (spawning season). Information was also collected on any barriers to salmon passage in the water. The information collected was then passed on to scientists so that they could determine fluctuations in populations. The program was conducted with support and cooperation from the Bellevue Stream Team, Redmond Stream Team, and the cities of Seattle, Bothell, Kirkland, Renton, Issaquah, and Woodinville. The program concluded at the end of the 2015 spawning season.

The Salmon Watcher Program was a citizen science effort to monitor and provide information that may help identify the effects of climate change on different commercially and ecologically valuable species in Washington State. Although the program has ended, the data will continue to serve as critical documentation of salmon distribution and trends in the area over the 20-year timeframe.

Additionally, partners such as the Bellevue Stream Team will continue to hold trainings and collect data on local salmon populations.