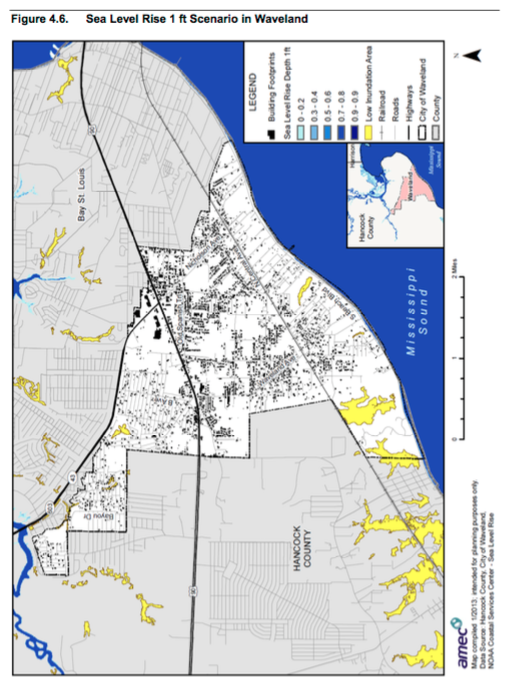 Waveland, Mississippi is a small town in the Gulf of Mexico. Many residents reside in areas less than 15 meters above sea level. Frequent floods and resulting costs of insurance rates and home repairs are driving residents out of the city. With a grant funded by the Federal Emergency Management Agency and the Alabama-Mississippi Sea Grant, the City of Waveland hired the consulting firm AMEC Environment and Infrastructure (AMEC) to develop a hazard mitigation plan that followed the Disaster Mitigation ACT (DMA) planning regulations. The plan will better equip the City of Waveland to facilitate risk-based decision-making and mitigate city vulnerability.

Waveland, Mississippi, is a small town located along the Mississippi Sound of the Gulf of Mexico. A majority of the municipality is less than 15 feet above sea level, and 90% of the municipal area is in a special flood hazard zone. Any event larger than a base flood (i.e. a flood with a one percent chance of being equaled or exceeded in any given year, also known as a 100-year flood), including rainfall-related flooding and storm-surge flooding, leads to neighborhood damage, and frequent floods are affecting home mortgages and flood insurance rates. Recurrent flooding is driving many residents out of the area, as they cannot afford to pay the increasing cost of flood insurance and keep up with repairs associated with flood damage. Waveland’s population has shrunk significantly since Hurricane Katrina.

In response to increasing flood risk and community vulnerability, the City of Waveland decided to update its 2007 FEMA-approved hazard mitigation plan in order to better mitigate the risks of flood and other natural disasters, hoping that enhanced community safety would reduce resident migration. Updating the hazard mitigation plan would also maintain the city’s eligibility for federal disaster assistance, and earn the municipality credits under the National Flood Insurance Program Community Rating System (CRS), helping reduce insurance rates for homeowners and business owners.

The hazard mitigation plan update process began in Fall 2012. Waveland hired AMEC Environment and Infrastructure (AMEC; now part of Wood Group, PLC) to facilitate the plan update process and to help incorporate climate change impacts into the plan revision. Multiple local government and agency representatives were also engaged throughout the process via a Hazard Mitigation Planning Committee, which the city was required to form under the Disaster Mitigation Act (DMA) planning regulations.

Phase 1, Organize Resources, involved setting up a process for the plan update, organizing the Hazard Mitigation Planning Committee, and engaging the public. The city passed a resolution forming the Hazard Mitigation Planning Committee and approving the established planning process, which was developed by AMEC, the fire department, and other city officials. To engage the public and other critical stakeholders, the city held a series of private and public meetings discussing the plan process and requesting feedback. For example, at the project kick-off meeting, members of the public provided input on how they would like to be involved in the process, and identified preferred methods of communication; they were then able to attend subsequent meetings and provide input on the draft report. Significant stakeholders, including county, state, and federal agencies and nearby municipalities, were also engaged to participate in meetings and different stages of the plan update. Community planning and hazard mitigation planning efforts among these different agencies and groups were also identified to ensure they would be integrated into Waveland’s final plan revision.

Phase 2 involved conducting a risk assessment to better understand the various hazards threatening the City of Waveland. This phase consisted of identifying potential hazards, gathering available information and modeling on each hazard, conducting a vulnerability assessment to understand future risk, and assessing the city’s capacity to implement hazard mitigation activities. To facilitate this process, AMEC distributed worksheets to the Hazard Mitigation Planning Committee and other regional stakeholders to gather information on past and current hazards, existing city capabilities and values, and to identify potential response actions. Via another worksheet, AMEC also evaluated progress on mitigation activities identified in the 2007 hazard mitigation plan. Worksheet information and input from HPMC meetings were used to identify known and potential major hazards, nine of which were not assessed in the previous hazard mitigation plan, including climate change (sea level rise and storm surge), flooding, and drought.

Once these hazards were identified, AMEC searched the scientific literature and available agency databases, and used a variety of available tools and GIS to gather relevant information, including past occurrences and future projected trends. This information was overlaid with city data (e.g., housing distribution, facility locations, cultural, historic, and natural resources locations, population trends, land use) to model future vulnerability, which for each factor was ranked on a scale from Extremely Low to Extremely High. Finally, AMEC conducted a capacity assessment, evaluating the various plans, ordinances, and partnerships available to the city that could be used to implement hazard mitigation activities.

Climate change was explicitly incorporated as a hazard for the City of Waveland, but plan authors also identified how climate change may interact with other hazards, such as coastal bank erosion and dam and levee failure. Climate information and projections for the report were sourced from a variety of peer-reviewed state and federal reports. AMEC also used several available climate tools to incorporate site-specific projections and help visualize potential climate impacts on city resources. For example, it utilized the NOAA Sea Level Rise Viewer to model sea level rise of 1 foot (best case), 3 feet (average case), and 6 feet (worst case), overlaying these projections with GIS files of city infrastructure. The Sea Level Rise Viewer was also used to visualize how storm surge may change with different sea level rise scenarios. In addition, AMEC utilized the National Weather Service’s Sea, Lake and Overland Surges from Hurricanes (SLOSH) model to calculate potential storm surge associated with hurricanes in the absence of sea level rise. AMEC also used the U.S. Drought Monitor to demonstrate drought trends in the city and broader region and obtained flood and hazard information from Digital Flood Insurance Maps and Flood Insurance Rates Maps.

After identifying future hazard risk, Phase 3 focused on developing the updated mitigation plan. A series of meetings with the HPMC was used to review and update the major goals of the mitigation plan, as well as identify and analyze potential mitigation actions to address key hazards. Only hazards deemed to be high risk during the risk assessment stage were considered for action development, including: climate change (storm surge/sea level rise), coastal/canal bank erosion, floods (100/500 year floods and localized flooding), hurricanes/tropical storms/storm surge, thunderstorms, and hazardous material release from railroads. The draft plan was circulated for comment, and the final version was published and adopted by the city in 2013.

In general, by identifying key hazards and future risk, Waveland’s local hazard mitigation plan will facilitate risk-based decision-making to mitigate city vulnerability to both climate and non-climate hazards. The Waveland community has been very receptive to the plan revision process and different component projects. The final plan is posted on the city’s website and on social media, allowing residents to have open access.

Since plan publication in 2013, the City of Waveland has begun to implement priority projects and actions to mitigate municipal risk. For example, the city is identifying the most flood-prone zones, and since 90% of the city lies in a special flood hazard area, the city is implementing a $6.9 million drainage project aimed at improving floodwater drainage. Waveland is working to secure funding to develop a raised boardwalk on one of the city’s main streets, Coleman Avenue. The boardwalk will be raised 23 feet off the ground and be able to withstand the high winds associated with extreme storm events. The goal is to increase resilience, including bolstering local commerce. The boardwalk project is estimated to cost nearly $20 million. In addition, the city is looking into building an offshore breakwater to protect the coast from sea level rise, storm surge, and coastal erosion. Erosion alone costs the city approximately $1 million per year in beach restoration efforts.  While these steps toward risk mitigation are promising, limits in staff capacity and funding, local politics, and the lack of mitigation or adaptation actions of neighboring communities are among some of the major challenges to implementing key actions identified in the plan.

Waveland (the Land of the Waves) was originally part of old Shieldsboro (now Bay St. Louis​) and was known as Montgomery Station and Grand Bend before applying for, and being granted, a special charter to become a separate municipality with a Mayor and ​Board of Aldermen in 1888.