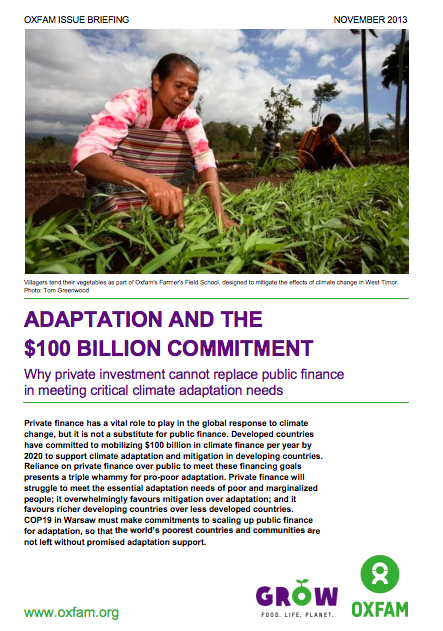 Private finance has a vital role to play in the global response to climate change, but it is not a substitute for public finance. Developed countries have committed to mobilizing $100 billion in climate finance per year by 2020 to support climate adaptation and mitigation in developing countries. Reliance on private finance over public to meet these financing goals presents a triple whammy for pro-poor adaptation. Private finance will struggle to meet the essential adaptation needs of poor and marginalized people; it overwhelmingly favours mitigation over adaptation; and it favours richer developing countries over less developed countries. COP19 in Warsaw in November 2013 must turn ambiguity into action by advancing strategies to scale-up public finance for adaptation, and by providing assurances that commitments to critical support for the world’s poorest countries and communities over the coming years will be met.

Oxfam is an international confederation of 17 organizations networked together in more than 90 countries, as part of a global movement for change, to build a future free from the injustice of poverty. We work directly with communities and we seek to influence the powerful to ensure that poor people can improve their lives and livelihoods and have a say in decisions that affect them.