Adaptation Case Studies in the Western United States: Intersection of Federal and State Authority for Conserving the Greater Sage Grouse and the Colorado River Water Supply 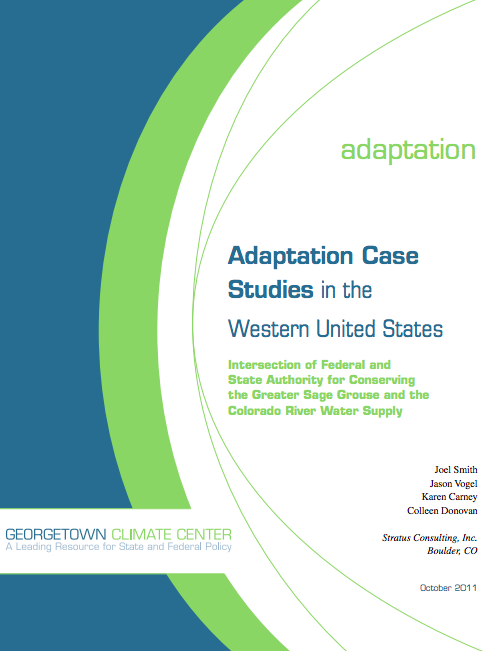 Adaptation is a crucial element of responding to the challenges of climate change because some climate change impacts are already being felt and additional adverse impacts are unavoidable. However, significant questions remain about how to adapt, when to adapt, and who should adapt. One of the most significant questions is: what role can different levels of government most effectively play in adapting to climate change and under what circumstances? Recently, efforts have been made to analyze how the federal government might play an effective role in adaptation and how adaptation can support local governments and municipalities. The role of states, however, has not been closely evaluated, even though many states have initiated significant adaptation planning efforts (e.g., Maryland Commission on Climate Change, 2008; Alaska Adaptation Advisory Group, 2010).

Many impacts of a changing climate play out at the local level where fundamental differences in policy exist, relating to social, physical, climatological, and political matters. For example, adapting to rising sea levels in New York City may require very different policy responses than in New Orleans. Similarly, adaptation to changing precipitation regimes in snowpack-reliant municipalities in the Rocky Mountain West may differ substantially from adaptation measures undertaken in groundwater-reliant municipalities in Florida. The federal government also plays an important role in adaptation to climate change, especially for federally owned or managed properties, federal government operations, and as a provider of financial and technical resources. In reality, all levels of government must be considered in order to understand the most effective intervention for any given climate change impact. This report focuses on states because of their significance in setting policy in climate-sensitive sectors and their critical linkage between the federal government and local governments and municipalities.

This report uses two case studies to examine the potential role of states in adapting to climate change: Wyoming’s management and conservation of the greater sage grouse and Colorado’s management and regulation of Colorado River water supplies. These two cases were not selected to be representative or comprehensive. Rather, they were selected as two examples of very different climate impacts for which the state plays a significant governance role. This report should not be approached as prescriptive and final, but rather as exploratory and tentative.

The Center performs a vital role in the development of policy by: