Adaptation to Climate Change: A Comparative Analysis of Modeling Methods for Heat-Related Mortality 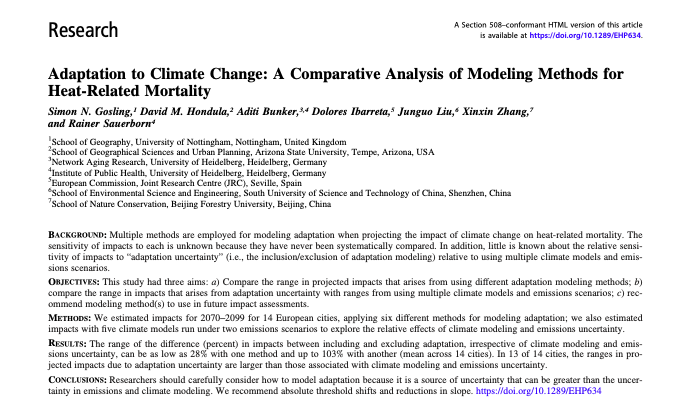 BACKGROUND: Multiple methods are employed for modeling adaptation when projecting the impact of climate change on heat-related mortality. The sensitivity of impacts to each is unknown because they have never been systematically compared. In addition, little is known about the relative sensitivity of impacts to “adaptation uncertainty” (i.e., the inclusion/exclusion of adaptation modeling) relative to using multiple climate models and emissions scenarios.

OBJECTIVES: This study had three aims: a) Compare the range in projected impacts that arises from using different adaptation modeling methods; b) compare the range in impacts that arises from adaptation uncertainty with ranges from using multiple climate models and emissions scenarios; c) recommend modeling method(s) to use in future impact assessments.

CONCLUSIONS: Researchers should carefully consider how to model adaptation because it is a source of uncertainty that can be greater than the uncertainty in emissions and climate modeling. We recommend absolute threshold shifts and reductions in slope.