Adaptation Planning – What U.S. States and Localities are Doing 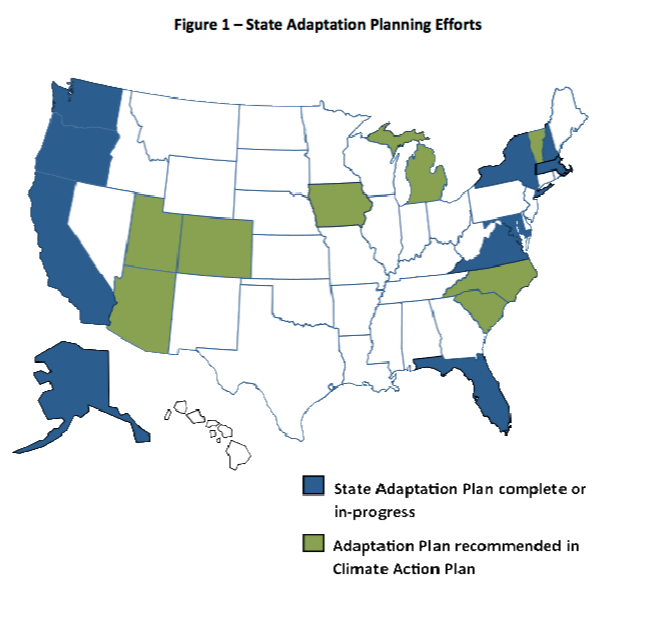 The scientific community has reached a strong consensus that the climate is changing. Current projections show further global temperature increases from 2.5ºF to 10.4ºF by 2100, while warming in the United States is expected to be even higher. This warming will have significant consequences for the United States, causing sea-level rise that will gradually inundate coastal areas and increase both beach erosion and flooding from coastal storms, changes in precipitation patterns, increased risk of droughts and floods, stronger hurricanes, threats to biodiversity, and a number of potential challenges for public health. Early impacts of climate change are already appearing. Several U.S. legislative committees are analyzing proposed federal greenhouse gas (GHG) emission reduction policies, and dozens of states are taking action to reduce GHG emissions. While these actions are vital to reducing the impacts of future climate change, we are already committed to further warming for decades to come. As a result, strategies to adapt to the impacts of climate change will be necessary as a parallel strategy to mitigating greenhouse gas emissions..While governments act to mitigate future climate change, they must also plan and act to address the impacts. This preparation includes risk assessments, prioritization of projects, funding and allocation of both financial and human resources, solution development and implementation, and rapid deployment of information sharing and decision support tools. Corresponding to the size of the challenge, impacts span entire communities and regions. As such, adaptation is dependent on numerous stakeholders from federal, state and local government, science and academia, the private sector, and community residents to develop solutions to complex problems for which prior solutions may not exist. Adaptation will require creativity, compromise, and collaboration across agencies, sectors and traditional geographic boundaries.This paper focuses on adaptation plans and actions in progress by state and local governments. Many of these efforts are in their earliest stages. Some states are including adaptation within the scope of their state Climate Action Plans addressing GHG emissions. A few others have recognized the need for separate and comprehensive adaptation commissions to parallel their mitigation efforts. Many are simply responding to climate impacts as they occur, without necessarily attributing the impact to climate change. Regardless of the basis for the adaptive response, states have much they can learn from each other, and from localities where adaptation is already occurring. While comprehensive and proactive adaptation planning is still in the early stages, as states complete their GHG mitigation plans, adaptation planning is gaining greater attention and resources from states and localities.