Adaptation Strategies for Water and Agricultural Sectors in SouthEast Asia 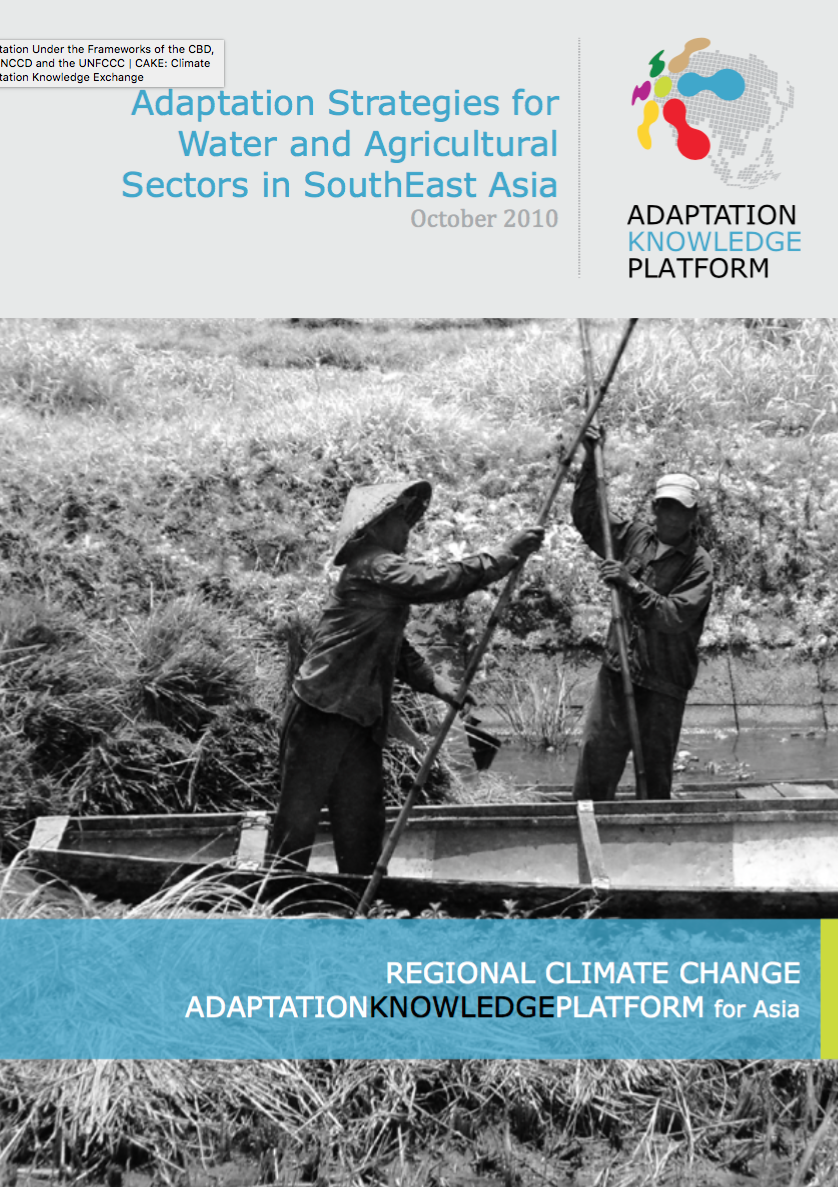 SouthEast Asia will be strongly affected by the impacts of climate change according to the Intergovernmental Panel on Climate Change (IPCC) Technical Paper VI entitled “Climate Change and Water” (IPCC, 2008). This is due to the fact that one of the most pressing environmental problems in this part of the world is the expansion of areas subjected to increasing water stress. In reference to the Special Report on Emissions Scenarios (SRES), it is estimated that in the next forty years, the number of people that will experience severe water stress will increase between 4 and 5 times (Arnell, 2004). Monthly precipitations are expected to decrease in number but increase in intensity. Dry seasons are expected to be more in number and longer in duration. Thus, the risks of flooding in the wet season and water shortage in the dry season are also highly increasing. The general reduction of the rivers’ flow and the rise in sea level will provoke the intrusion of saltwater in estuaries and eventually cause a general deterioration of surface and ground water stocks.

These phenomena will impact strongly in the SouthEast Asian region, where 8 members of the Association of SouthEast Asian Nations (ASEAN), namely, Vietnam, Thailand, Malaysia, Philippines, Indonesia, Lao PDR, Myanmar and Cambodia are given focus in this report. In these countries, the increasing water stress, the increasing intensity of precipitations and the consequent floods will provoke the general erosion of the land and, consequently, the general deterioration of land quality and productivity. These conditions, coupled with temperature changes and low water quality and availability impacts negatively on agriculture, in general, and livestock production and the aquaculture industry, in particular. It means that the vulnerability of the population will increase because the risks on water and food security are also increasing. Strategies need to be put in place in order for the general population to adapt to the changing physical and climatic conditions. And to enhance the resilience of the socio-economic systems in these countries, cooperation between local governments and international organizations is essential.

This desktop study is conducted based on a stocktaking analysis provided by the Regional Climate Change Adaptation Knowledge Platform for Asia (Adaptation Knowledge Platform) in the ASEAN member countries indicated earlier. The purpose of this study is to illustrate the current state of adaptation, its status and possibilities, of the region. It also investigates how these ASEAN countries can learn from each other and from the scientific community, in order to define some adaptation strategies as possible next steps and priorities in the status of water and agriculture management from a socio-economic perspective. The aim of the Adaptation Knowledge Platform is to verify the state of knowledge in the different countries, identify the gaps and to try to fill them up.