Adapting to Climate Change in Ontario: Towards the Design and Implementation of a Strategy and Action Plan 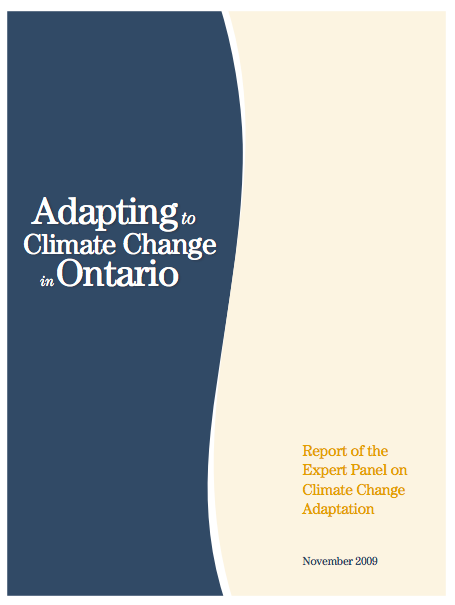 Section 1 elaborates upon the nature of climate change and the adaptation imperative in detail. Listed are examples of the impacts to be expected in various sectors of the economy, along with the most recent projections of climate developed from climate models by the Canadian Climate Change Scenarios Network. It is emphasized that both adaptation and mitigation are required to respond to climate change and that adaptation by itself will not suffice. Current limits and constraints on adaptation are briefly described. It is concluded that adaptation is so pervasive in scope, and affects the Ontario economy, society and environment in such diverse ways that a broad integrated approach is required. Examples of adaptation actions by other provinces and territories are contained within this section to describe how other governments are meeting the challenge.

Section 2 describes the strategic goals and specific recommendations from the Panel to inform both the development of a strategy and an action plan. On the basis of evidence from dialogue with ministries, authors have identified the main components of a potential strategy, as well as important ingredients for an action plan which can be quickly initiated. Well planned action is of the essence in adapting to climate change. In the process of preparing longer-term action plans, the government should take the opportunity to engage the private sector and citizens in dialogue about the challenges. The government must assume responsibility for leading the strategy and actions and it will be broadly inclusive of all the economic sectors and social communities and regions of the province – and it seems that this leadership will be forthcoming.

The overall objective for the Government of Ontario is to build a climate-resilient province which will adapt well to the impacts of climate change and its challenges.