After the Drought: The 2012 Drought, Russian Farmers, and the Challenges of Adapting to Extreme Weather Events 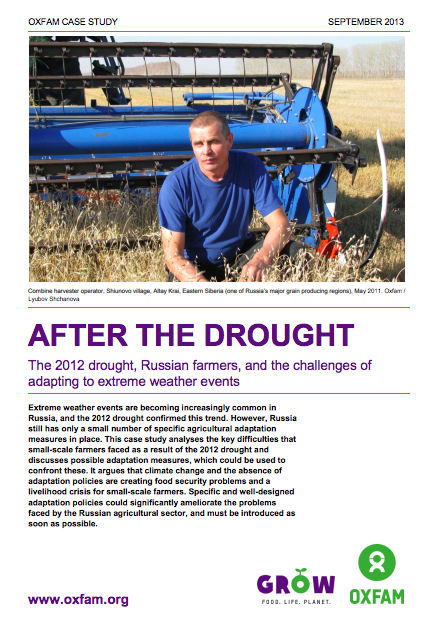 Extreme weather events are becoming increasingly common in Russia, and the 2012 drought confirmed this trend. However, Russia still has only a small number of specific agricultural adaptation measures in place. This case study analyses the key difficulties that small-scale farmers faced as a result of the 2012 drought and discusses possible adaptation measures, which could be used to confront these. It argues that climate change and the absence of adaptation policies are creating food security problems and a livelihood crisis for small-scale farmers. Specific and well-designed adaptation policies could significantly ameliorate the problems faced by the Russian agricultural sector, and must be introduced as soon as possible.

Oxfam is an international confederation of 17 organizations networked together in more than 90 countries, as part of a global movement for change, to build a future free from the injustice of poverty. We work directly with communities and we seek to influence the powerful to ensure that poor people can improve their lives and livelihoods and have a say in decisions that affect them.